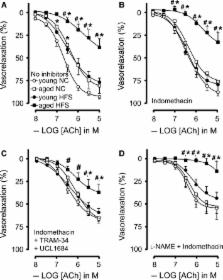 Differential effects of fat and sucrose on the development of obesity and diabetes in C57BL/6J and A/J mice.

J Rodin,  M Feinglos,  K. A. Sutherland … (1995)
We have previously demonstrated that the C57BL/6J (B/6J) mouse will develop severe obesity, hyperglycemia, and hyperinsulinemia if weaned onto a high-fat, high-sucrose (HH) diet. In the present study, we compared the effects of fat and sucrose separately and in combination on diabetes- and obesity-prone B/6J and diabetes- and obesity-resistant A/J mice. After 4 months, the feed efficiency ([FE] weight gained divided by calories consumed) did not differ across diets in A/J mice, but B/6J mice showed a significantly increased FE for fat. That is, B/6J mice gained more weight on high-fat diets without consuming more calories than A/J mice. The increase in FE was related to adipocyte hyperplasia in B/6J mice on high-fat diets. Fat-induced obesity in B/6J mice was unrelated to adrenal cortical activity. In the absence of fat, sucrose produced a decreased in FE in both strains. Animals fed a low-fat, high-sucrose (LH) diet were actually leaner than animals fed a high-complex-carbohydrate diet. Fat was also found to be the critical stimulus for hyperglycemia and hyperinsulinemia in B/6J mice. In the absence of fat, sucrose had no effect on plasma glucose or insulin. These data clearly show that across these two strains of mice, genetic differences in the metabolic response to fat are more important in the development of obesity and diabetes than the increased caloric content of a high-fat diet.

Jonathan W. Willett,  M Stampfer,  E Rimm … (1994)
To investigate the relation between obesity, fat distribution, and weight gain through adulthood and the risk of non-insulin-dependent diabetes mellitus (NIDDM). We analyzed data from a cohort of 51,529 U.S. male health professionals, 40-75 years of age in 1986, who completed biennial questionnaires sent out in 1986, 1988, 1990, and 1992. During 5 years of follow-up (1987-1992), 272 cases of NIDDM were diagnosed among men without a history of diabetes, heart disease, and cancer in 1986 and who provided complete health information. Relative risks (RRs) associated with different anthropometric measures were calculated controlling for age, and multivariate RRs were calculated controlling for smoking, family history of diabetes, and age. We found a strong positive association between overall obesity as measured by body mass index (BMI) and risk of diabetes. Men with a BMI of > or = 35 kg/m2 had a multivariate RR of 42.1 (95% confidence interval [CI] 22.0-80.6) compared with men with a BMI < 23.0 kg/m2. BMI at age 21 and absolute weight gain throughout adulthood were also significant independent risk factors for diabetes. Fat distribution, measured by waist-to-hip ratio (WHR), was a good predictor of diabetes only among the top 5%, while waist circumference was positively associated with the risk of diabetes among the top 20% of the cohort. These data suggest that waist circumference may be a better indicator than WHR of the relationship between abdominal adiposity and risk of diabetes. Although early obesity, absolute weight gain throughout adulthood, and waist circumference were good predictors of diabetes, attained BMI was the dominant risk factor for NIDDM; even men of average relative weight had significantly elevated RRs.

G. A. Colditz,  Jonathan W. Willett,  Hannah V Carey … (1997)
Obesity is an established risk factor for non-insulin-dependent diabetes mellitus (NIDDM). Anthropometric measures of overall and central obesity as predictors of NIDDM risk have not been as well studied, especially in women. Among 43,581 women enrolled in the Nurses' Health Study who in 1986 provided waist, hip, and weight information and who were initially free from diabetes and other major chronic diseases, NIDDM incidence was followed from 1986 to 1994. After adjustment for age, family history of diabetes, smoking, exercise, and several dietary factors, the relative risk of NIDDM for the 90th percentile of body mass index (BMI) (weight (kg)/height (m)2) (BMI = 29.9) versus the 10th percentile (BMI = 20.1) was 11.2 (95% confidence interval (CI) 7.9-15.9). Controlling for BMI and other potentially confounding factors, the relative risk for the 90th percentile of waist: hip ratio (WHR) (WHR = 0.86) versus the 10th percentile (WHR = 0.70) was 3.1 (95% CI 2.3-4.1), and the relative risk for the 90th percentile of waist circumference (36.2 inches or 92 cm) versus the 10th percentile (26.2 inches or 67 cm) was 5.1 (95% CI 2.9-8.9). BMI, WHR, and waist circumference are powerful independent predictors of NIDDM in US women. Measurement of BMI and waist circumference (with or without hip circumference) are potentially useful tools for clinicians in counseling patients regarding NIDDM risk and risk reduction.