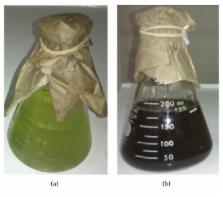 Currently, the biosynthesis of silver-based nanomaterials attracts enormous attention owing to the documented antimicrobial properties of these ones. This study reports the extracellular biosynthesis of silver nanoparticles (Ag-NPs) using a Pseudomonas aeruginosa strain from a reference culture collection. A greenish culture supernatant of P. aeruginosa incubated at 37°C with a silver nitrate solution for 24 h changed to a yellowish brown color, indicating the formation of Ag-NPs, which was confirmed by UV-vis spectroscopy, transmission electron microscopy, and X-ray diffraction. TEM analysis showed spherical and pseudospherical nanoparticles with a distributed size mainly between 25 and 45 nm, and the XRD pattern revealed the crystalline nature of Ag-NPs. Also it provides an evaluation of the antimicrobial activity of the biosynthesized Ag-NPs against human pathogenic and opportunistic microorganisms, namely, Staphylococcus aureus, Staphylococcus epidermidis, Enterococcus faecalis, Proteus mirabilis, Acinetobacter baumannii, Escherichia coli, P. aeruginosa, and Klebsiella pneumonia. Ag-NPs were found to be bioactive at picomolar concentration levels showing bactericidal effects against both Gram-positive and Gram-negative bacterial strains. This work demonstrates the first helpful use of biosynthesized Ag-NPs as broad spectrum bactericidal agents for clinical strains of pathogenic multidrug-resistant bacteria such as methicillin-resistant S. aureus, A. baumannii, and E. coli. In addition, these Ag-NPs showed negligible cytotoxic effect in human neutrophils suggesting low toxicity to the host.

The epidemic of antibiotic-resistant infections: a call to action for the medical community from the Infectious Diseases Society of America.

B Spellberg,  R. Guidos,  D. Gilbert … (2008)
The ongoing explosion of antibiotic-resistant infections continues to plague global and US health care. Meanwhile, an equally alarming decline has occurred in the research and development of new antibiotics to deal with the threat. In response to this microbial "perfect storm," in 2001, the federal Interagency Task Force on Antimicrobial Resistance released the "Action Plan to Combat Antimicrobial Resistance; Part 1: Domestic" to strengthen the response in the United States. The Infectious Diseases Society of America (IDSA) followed in 2004 with its own report, "Bad Bugs, No Drugs: As Antibiotic Discovery Stagnates, A Public Health Crisis Brews," which proposed incentives to reinvigorate pharmaceutical investment in antibiotic research and development. The IDSA's subsequent lobbying efforts led to the introduction of promising legislation in the 109 th US Congress (January 2005-December 2006). Unfortunately, the legislation was not enacted. During the 110 th Congress, the IDSA has continued to work with congressional leaders on promising legislation to address antibiotic-resistant infection. Nevertheless, despite intensive public relations and lobbying efforts, it remains unclear whether sufficiently robust legislation will be enacted. In the meantime, microbes continue to become more resistant, the antibiotic pipeline continues to diminish, and the majority of the public remains unaware of this critical situation. The result of insufficient federal funding; insufficient surveillance, prevention, and control; insufficient research and development activities; misguided regulation of antibiotics in agriculture and, in particular, for food animals; and insufficient overall coordination of US (and international) efforts could mean a literal return to the preantibiotic era for many types of infections. If we are to address the antimicrobial resistance crisis, a concerted, grassroots effort led by the medical community will be required.

Zhen Wang,  L. Zhang,  Sherman Gu … (2008)
Nanotechnology is the understanding and control of matter generally in the 1-100 nm dimension range. The application of nanotechnology to medicine, known as nanomedicine, concerns the use of precisely engineered materials at this length scale to develop novel therapeutic and diagnostic modalities. Nanomaterials have unique physicochemical properties, such as ultra small size, large surface area to mass ratio, and high reactivity, which are different from bulk materials of the same composition. These properties can be used to overcome some of the limitations found in traditional therapeutic and diagnostic agents.

Kalimuthu Kalishwaralal,  Selvaraj BarathManiKanth,  Sureshbabu Ram Kumar Pandian … (2010)
Biofilms are ensued due to bacteria that attach to surfaces and aggregate in a hydrated polymeric matrix. Formation of these sessile communities and their inherent resistance to anti-microbial agents are the source of many relentless and chronic bacterial infections. Such biofilms are responsible play a major role in development of ocular related infectious diseases in human namely microbial keratitis. Different approaches have been used for preventing biofilm related infections in health care settings. Many of these methods have their own demerits that include chemical based complications; emergent antibiotic resistant strains, etc. silver nanoparticles are renowned for their influential anti-microbial activity. Hence the present study over the biologically synthesized silver nanoparticles, exhibited a potential anti-biofilm activity that was tested in vitro on biofilms formed by Pseudomonas aeruginosa and Staphylococcus epidermidis during 24-h treatment. Treating these organisms with silver nanoparticles resulted in more than 95% inhibition in biofilm formation. The inhibition was known to be invariable of the species tested. As a result this study demonstrates the futuristic application of silver nanoparticles in treating microbial keratitis based on its potential anti-biofilm activity. Copyright 2010 Elsevier B.V. All rights reserved.