Lymphatic Filariasis Control in Tanzania: Effect of Repeated Mass Drug Administration with Ivermectin and Albendazole on Infection and Transmission 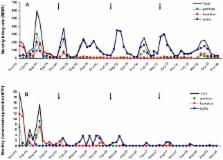 In most countries of sub-Saharan Africa the control of lymphatic filariasis (LF) is based on annual mass drug administration (MDA) with a combination of ivermectin and albendazole, in order to interrupt transmission. Here we present the first detailed study on the effect of 3 repeated MDAs with this drug combination, as implemented by the Tanzanian National Lymphatic Filariasis Elimination Programme (NLFEP).

Infection and transmission was monitored during a five-year period (one pre-intervention and four post-intervention years) in a highly endemic community (Kirare village) in north-eastern Tanzania. The vectors were Anopheles gambiae, An. funestus and Cx. quinquefasciatus. After start of intervention, human microfilaraemia initially decreased rapidly and statistically significant (prevalence by 21.2% and 40.4%, and mean intensity by 48.4% and 73.7%, compared to pre-treatment values after the first and second MDA, respectively), but thereafter the effect levelled off. The initial decrease in microfilaraemia led to significant decreases in vector infection and vector infectivity rates and thus to a considerable reduction in transmission (by 74.3% and 91.3% compared to pre-treatment level after first and second MDA, respectively). However, the decrease in infection and infectivity rates subsequently also levelled off, and low-level transmission was still noted after the third MDA. The MDAs had limited effect on circulating filarial antigens and antibody response to Bm14.

Critical issues that may potentially explain the observed waning effect of the MDAs in the later study period include the long intervals between MDAs and a lower than optimal treatment coverage. The findings highlight the importance of ongoing surveillance for monitoring the progress of LF control programmes, and it calls for more research into the long-term effect of repeated ivermectin/albendazole MDAs (including the significance of treatment intervals and compliance), in order to optimize efforts to control LF in sub-Saharan Africa.

Lymphatic filariasis (LF) is a disabling mosquito borne parasitic disease and one of the major neglected tropical diseases. In most countries of Sub-Saharan Africa the control of LF is based on yearly mass drug administration (MDA) with a combination of ivermectin and albendazole, in order to interrupt transmission. We monitored the effect of 3 repeated MDAs with this drug combination, as implemented by the Tanzanian National Lymphatic Filariasis Elimination Programme, on human infection and mosquito transmission during a five-year period (one pre-intervention and four post-intervention years) in a highly endemic community in north-eastern Tanzania. After start of intervention, human infection with the blood-stage larva of the parasite (microfilaria) initially decreased rapidly, leading to considerable reduction in transmission. The effects thereafter levelled off and transmission still occurred at low level after the third MDA. The MDAs had limited effect on molecular markers of adult worm burden (circulating filarial antigens) and transmission exposure (antibodies to Bm14 antigen) in the human population. The study highlights the importance of monitoring and regular evaluation in order to make evidence based programme adjustments, and it points to a need for further assessment of the long-term effect of repeated ivermectin/albendazole MDAs (including the importance of application intervals and treatment coverage), in order to optimize efforts to control LF in sub-Saharan Africa.

Peter Hotez,  Aruna Kamath (2009)
The neglected tropical diseases (NTDs) are the most common conditions affecting the poorest 500 million people living in sub-Saharan Africa (SSA), and together produce a burden of disease that may be equivalent to up to one-half of SSA's malaria disease burden and more than double that caused by tuberculosis. Approximately 85% of the NTD disease burden results from helminth infections. Hookworm infection occurs in almost half of SSA's poorest people, including 40–50 million school-aged children and 7 million pregnant women in whom it is a leading cause of anemia. Schistosomiasis is the second most prevalent NTD after hookworm (192 million cases), accounting for 93% of the world's number of cases and possibly associated with increased horizontal transmission of HIV/AIDS. Lymphatic filariasis (46–51 million cases) and onchocerciasis (37 million cases) are also widespread in SSA, each disease representing a significant cause of disability and reduction in the region's agricultural productivity. There is a dearth of information on Africa's non-helminth NTDs. The protozoan infections, human African trypanosomiasis and visceral leishmaniasis, affect almost 100,000 people, primarily in areas of conflict in SSA where they cause high mortality, and where trachoma is the most prevalent bacterial NTD (30 million cases). However, there are little or no data on some very important protozoan infections, e.g., amebiasis and toxoplasmosis; bacterial infections, e.g., typhoid fever and non-typhoidal salmonellosis, the tick-borne bacterial zoonoses, and non-tuberculosis mycobaterial infections; and arboviral infections. Thus, the overall burden of Africa's NTDs may be severely underestimated. A full assessment is an important step for disease control priorities, particularly in Nigeria and the Democratic Republic of Congo, where the greatest number of NTDs may occur.

Effect of a fall in malaria transmission on morbidity and mortality in Kilifi, Kenya

Wendy O’Meara,  Phillip Bejon,  Tabitha W Mwangi … (2008)
Summary Background As efforts to control malaria are expanded across the world, understanding the role of transmission intensity in determining the burden of clinical malaria is crucial to the prediction and measurement of the effectiveness of interventions to reduce transmission. Furthermore, studies comparing several endemic sites led to speculation that as transmission decreases morbidity and mortality caused by severe malaria might increase. We aimed to assess the epidemiological characteristics of malaria in Kilifi, Kenya, during a period of decreasing transmission intensity. Methods We analyse 18 years (1990–2007) of surveillance data from a paediatric ward in a malaria-endemic region of Kenya. The hospital has a catchment area of 250 000 people. Clinical data and blood-film results for more than 61 000 admissions are reported. Findings Hospital admissions for malaria decreased from 18·43 per 1000 children in 2003 to 3·42 in 2007. Over 18 years of surveillance, the incidence of cerebral malaria initially increased; however, malaria mortality decreased overall because of a decrease in incidence of severe malarial anaemia since 1997 (4·75 to 0·37 per 1000 children) and improved survival among children admitted with non-severe malaria. Parasite prevalence, the mean age of children admitted with malaria, and the proportion of children with cerebral malaria began to change 10 years before hospitalisation for malaria started to fall. Interpretation Sustained reduction in exposure to infection leads to changes in mean age and presentation of disease similar to those described in multisite studies. Changes in transmission might not lead to immediate reductions in incidence of clinical disease. However, longitudinal data do not indicate that reductions in transmission intensity lead to transient increases in morbidity and mortality. Funding Wellcome Trust, Kenya Medical Research Institute.