Genetic Epidemiology of Glucose-6-Dehydrogenase Deficiency in the Arab World 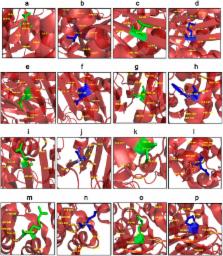 A systematic search was implemented using four literature databases (PubMed, Embase, Science Direct and Web of Science) to capture all the causative mutations of Glucose-6-phosphate dehydrogenase (G6PD) deficiency (G6PDD) in the 22 Arab countries. Our search yielded 43 studies that captured 33 mutations (23 missense, one silent, two deletions, and seven intronic mutations), in 3,430 Arab patients with G6PDD. The 23 missense mutations were then subjected to phenotypic classification using in silico prediction tools, which were compared to the WHO pathogenicity scale as a reference. These in silico tools were tested for their predicting efficiency using rigorous statistical analyses. Of the 23 missense mutations, p.S188F, p.I48T, p.N126D, and p.V68M, were identified as the most common mutations among Arab populations, but were not unique to the Arab world, interestingly, our search strategy found four other mutations (p.N135T, p.S179N, p.R246L, and p.Q307P) that are unique to Arabs. These mutations were exposed to structural analysis and molecular dynamics simulation analysis (MDSA), which predicting these mutant forms as potentially affect the enzyme function. The combination of the MDSA, structural analysis, and in silico predictions and statistical tools we used will provide a platform for future prediction accuracy for the pathogenicity of genetic mutations.

ConSurf: identification of functional regions in proteins by surface-mapping of phylogenetic information.

Tal Pupko, Fabian Glaser, Dalit Bechor-Shental … (2002)
We recently developed algorithmic tools for the identification of functionally important regions in proteins of known three dimensional structure by estimating the degree of conservation of the amino-acid sites among their close sequence homologues. Projecting the conservation grades onto the molecular surface of these proteins reveals patches of highly conserved (or occasionally highly variable) residues that are often of important biological function. We present a new web server, ConSurf, which automates these algorithmic tools. ConSurf may be used for high-throughput characterization of functional regions in proteins. The ConSurf web server is available at:http://consurf.tau.ac.il. A set of examples is available at http://consurf.tau.ac.il under 'GALLERY'.

Z. Wang, J. Moult (2001)
Inherited disease susceptibility in humans is most commonly associated with single nucleotide polymorphisms (SNPs). The mechanisms by which this occurs are still poorly understood. We have analyzed the effect of a set of disease-causing missense mutations arising from SNPs, and a set of newly determined SNPs from the general population. Results of in vitro mutagenesis studies, together with the protein structural context of each mutation, are used to develop a model for assigning a mechanism of action of each mutation at the protein level. Ninety percent of the known disease-causing missense mutations examined fit this model, with the vast majority affecting protein stability, through a variety of energy related factors. In sharp contrast, over 70% of the population set are found to be neutral. The remaining 30% are potentially involved in polygenic disease. Copyright 2001 Wiley-Liss, Inc.