Menstrual-Related Headaches Among a Cohort of African Adolescent Girls 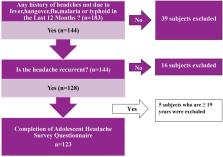 Migraine attacks associated with menstruation are generally perceived as more severe than attacks outside this period.

The study aimed at determining the frequency of menstrual-related headaches among a cohort of senior secondary school girls in Abeokuta, Nigeria. We also determined its burden among these school girls.

This study was cross-sectional using a validated adolescent headache survey questionnaire. A self-administration of the instrument was done during a school visit. A headache was classified using the ICHD-II criteria.

Menstrually related headache is prevalent even among the adolescent and it has adversely affected their productivity and social life. Care of adolescent with headaches should be intensified.

Epidemiology of migraine and headache in children and adolescents.

Çiçek Wöber-Bingöl (2013)
Migraine and headache are global disabling conditions causing considerable individual suffering and impaired quality of life in adults as well as in children and adolescents. Therefore, epidemiological studies are essential to assess the scope of the problem. This review covers epidemiological studies on migraine and headache in children and adolescents published in the past 25 years. A total of 64 cross-sectional studies have been identified, published in 32 different countries and including a total of 227,249 subjects. The estimated overall mean prevalence of headache was 54.4% (95% CI 43.1-65.8) and the overall mean prevalence of migraine was 9.1% (95% CI 7.1-11.1). There is a lack of population-based studies from low and low-middle income countries. In addition, there is very little information about the prevalence of probable migraine and chronic migraine and no information about menstrual migraine in the young.