Community involvement in design, implementation and evaluation of nutrition interventions to reduce chronic diseases in indigenous populations in the U.S.: a systematic review 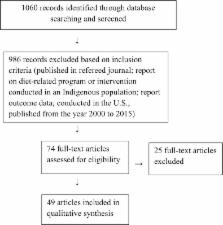 Indigenous peoples of the United States disproportionately experience chronic diseases associated with poor nutrition, including obesity and diabetes. While chronic disease related health disparities among Indigenous people are well documented, it is unknown whether interventions adequately address these health disparities. In addition, it is unknown whether and to what extent interventions are culturally adapted or tailored to the unique culture, worldview and nutrition environments of Indigenous people. The aim of this review was to identify and characterize nutrition interventions conducted with Indigenous populations in the US, and to determine whether and to what degree communities are involved in intervention design, implementation and evaluation.

Peer-reviewed articles were identified using MEDLINE. Articles included were published in English in a refereed journal between 2000 and 2015, reported on a diet-related intervention in Indigenous populations in the US, and reported outcome data. Data extracted were program objectives and activities, target population, geographic region, formative research to inform design and evaluation, partnership, capacity building, involvement of the local food system, and outcomes. Narrative synthesis of intervention characteristics and the degree and type of community involvement was performed.

Of 1060 records identified, 49 studies were included. Overall, interventions were successful in producing changes in knowledge, behavior or health (79%). Interventions mostly targeted adults in the Western region and used a pre-test, post-test design. Involvement of communities in intervention design, implementation, and evaluation varied from not at all to involvement at all stages. Of programs reporting significant changes in outcomes, more than half used at least three strategies to engage communities. However, formative research to inform the evaluation was not performed to a great degree, and fewer than half of the programs identified described involvement of the local food system.

The extent of use of strategies to promote community engagement in programs reporting significant outcomes is notable. In planning interventions in Indigenous groups, researchers should consider ways to involve the community in intervention design, execution and evaluation. There is a particular need for studies focused on Indigenous youth in diverse regions of the US to further address diet-related chronic conditions.

Pathways: a school-based, randomized controlled trial for the prevention of obesity in American Indian schoolchildren.

Benjamin Caballero,  Theresa Clay,  Sally Davis … (2003)
Childhood obesity is a major public health problem in the United States, particularly among American Indian communities. The objective was to evaluate the effectiveness of a school-based, multicomponent intervention for reducing percentage body fat in American Indian schoolchildren. This study was a randomized, controlled, school-based trial involving 1704 children in 41 schools and was conducted over 3 consecutive years, from 3rd to 5th grades, in schools serving American Indian communities in Arizona, New Mexico, and South Dakota. The intervention had 4 components: 1) change in dietary intake, 2) increase in physical activity, 3) a classroom curriculum focused on healthy eating and lifestyle, and 4) a family-involvement program. The main outcome was percentage body fat; other outcomes included dietary intake, physical activity, and knowledge, attitudes, and behaviors. The intervention resulted in no significant reduction in percentage body fat. However, a significant reduction in the percentage of energy from fat was observed in the intervention schools. Total energy intake (by 24-h dietary recall) was significantly reduced in the intervention schools but energy intake (by direct observation) was not. Motion sensor data showed similar activity levels in both the intervention and control schools. Several components of knowledge, attitudes, and behaviors were also positively and significantly changed by the intervention. These results document the feasibility of implementing a multicomponent program for obesity prevention in elementary schools serving American Indian communities. The program produced significant positive changes in fat intake and in food- and health-related knowledge and behaviors. More intense or longer interventions may be needed to significantly reduce adiposity in this population.

Prevalence of obesity among US preschool children in different racial and ethnic groups.

Hayley C Whitaker,  Judy Anderson (2009)
To estimate the prevalence of obesity in 5 major racial/ethnic groups in 4-year-old US children. Cross-sectional secondary data analysis. Nationally representative sample of US children born in 2001. Height and weight were measured in 2005 in approximately 8550 children who participated in the Early Childhood Longitudinal Study, Birth Cohort. Racial/ethnic group. Prevalence of obesity, defined as body mass index at or above the 95th percentile for age of the sex-specific Centers for Disease Control and Prevention growth charts. Obesity prevalence among 4-year-old US children (mean age, 52.3 months) was 18.4% (95% confidence interval [CI], 17.1%-19.8%). Obesity prevalence differed by racial/ethnic group (P < .001): American Indian/Native Alaskan, 31.2% (95% CI, 24.6%-37.8%); Hispanic, 22.0% (95% CI, 19.5%-24.5%); non-Hispanic black, 20.8% (95% CI, 17.8%-23.7%); non-Hispanic white, 15.9% (95% CI, 14.3%-17.5%); and Asian, 12.8% (95% CI, 10.0%-15.6%). All pairwise differences in obesity prevalence between racial/ethnic groups were statistically significant after a Bonferroni adjustment (P < .005) except for those between Hispanic and non-Hispanic black children and between non-Hispanic white and Asian children. Racial/ethnic disparities in obesity are apparent in 4-year-old US children. The highest prevalence is in American Indian/Native Alaskan children, in whom obesity is twice as common as in non-Hispanic white or Asian children.