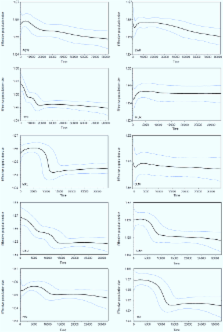 Agriculture resulted in extensive population growths and human activities. However, whether major human expansions started after Neolithic Time still remained controversial. With the benefit of 1000 Genome Project, we were able to analyze a total of 910 samples from 11 populations in Africa, Europe and Americas. From these random samples, we identified the expansion lineages and reconstructed the historical demographic variations. In all the three continents, we found that most major lineage expansions (11 out of 15 star lineages in Africa, all autochthonous lineages in Europe and America) coalesced before the first appearance of agriculture. Furthermore, major population expansions were estimated after Last Glacial Maximum but before Neolithic Time, also corresponding to the result of major lineage expansions. Considering results in current and previous study, global mtDNA evidence showed that rising temperature after Last Glacial Maximum offered amiable environments and might be the most important factor for prehistorical human expansions.

Evolution, consequences and future of plant and animal domestication.

Jared Diamond (2002)
Domestication interests us as the most momentous change in Holocene human history. Why did it operate on so few wild species, in so few geographic areas? Why did people adopt it at all, why did they adopt it when they did, and how did it spread? The answers to these questions determined the remaking of the modern world, as farmers spread at the expense of hunter-gatherers and of other farmers.

Farmers and their languages: the first expansions.

Don J. Diamond,  Peter Bellwood (2003)
The largest movements and replacements of human populations since the end of the Ice Ages resulted from the geographically uneven rise of food production around the world. The first farming societies thereby gained great advantages over hunter-gatherer societies. But most of those resulting shifts of populations and languages are complex, controversial, or both. We discuss the main complications and specific examples involving 15 language families. Further progress will depend on interdisciplinary research that combines archaeology, crop and livestock studies, physical anthropology, genetics, and linguistics.

Ugo Perego,  Alessandro Achilli,  Norman Angerhofer … (2009)
It is widely accepted that the ancestors of Native Americans arrived in the New World via Beringia approximately 10 to 30 thousand years ago (kya). However, the arrival time(s), number of expansion events, and migration routes into the Western Hemisphere remain controversial because linguistic, archaeological, and genetic evidence have not yet provided coherent answers. Notably, most of the genetic evidence has been acquired from the analysis of the common pan-American mitochondrial DNA (mtDNA) haplogroups. In this study, we have instead identified and analyzed mtDNAs belonging to two rare Native American haplogroups named D4h3 and X2a. Phylogeographic analyses at the highest level of molecular resolution (69 entire mitochondrial genomes) reveal that two almost concomitant paths of migration from Beringia led to the Paleo-Indian dispersal approximately 15-17 kya. Haplogroup D4h3 spread into the Americas along the Pacific coast, whereas X2a entered through the ice-free corridor between the Laurentide and Cordilleran ice sheets. The examination of an additional 276 entire mtDNA sequences provides similar entry times for all common Native American haplogroups, thus indicating at least a dual origin for Paleo- Indians. A dual origin for the first Americans is a striking novelty from the genetic point of view, and it makes plausible a scenario positing that within a rather short period of time, there may have been several entries into the Americas from a dynamically changing Beringian source. Moreover, this implies that most probably more than one language family was carried along with the Paleo-Indians.