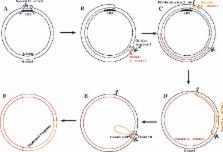 In the present study, the complete mitogenomes of two Symphurus species (Cynoglossidae), Symphurus plagiusa and Symphurus orientalis, were determined. The gene order in the S. plagiusa mitogenome is the same as that of a typical vertebrate (without any gene rearrangements). Surprisingly, large-scale gene rearrangements have occurred in S. orientalis. In the rearranged fragment from the control region (CR) to the WANCY tRNA cluster (tRNA cluster of tRNA-W, tRNA-A, tRNA-N, tRNA-C and tRNA-Y) in the S. orientalis mitogenome, tRNA-V and tRNA-M have been translocated to the 3’ end of the 16S rRNA gene, with six large intergenic spacers over 20 bp in length. In addition, an origin for light-strand replication (O L) structure that is typically located in the WANCY region was absent in both the S. plagiusa and S. orientalis mitogenomes. It is generally recognized that a sequence in the WANCY region that encodes tRNAs forms a hairpin structure (O L-like structure) and can act as the O L when the typical locus is lost. Moreover, an additional O L-like structure was identified near the control region in the S. plagiusa mitogenome.

The positions of the intergenic spacers and the rearranged genes of the S. orientalis mitogenome strongly indicate that the mechanism underlying the rearrangement of this mitogenome was Tandem Duplication and Random Loss. Additionally, two O L-like regions substituting for the typical locus were found in the S. plagiusa mitogenome. We speculate that the ancestral mitogenomes of S. plagiusa and S. orientalis also had this characteristic, such that if both O L-like structures functioned during mitochondrial replication, they could initiate duplicate replications of the light strand (L-strand), leading to duplication of the region between the two structures. We consider that this mechanism may account for the gene duplication that occurred during the gene rearrangement process in the evolution of the ancestral mitogenome to the S. orientalis mitogenome.

tRNAscan-SE: a program for improved detection of transfer RNA genes in genomic sequence.