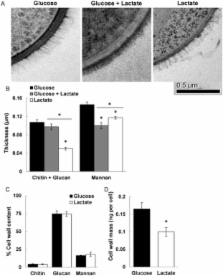 The survival of all microbes depends upon their ability to respond to environmental challenges. To establish infection, pathogens such as Candida albicans must mount effective stress responses to counter host defences while adapting to dynamic changes in nutrient status within host niches. Studies of C. albicans stress adaptation have generally been performed on glucose-grown cells, leaving the effects of alternative carbon sources upon stress resistance largely unexplored. We have shown that growth on alternative carbon sources, such as lactate, strongly influence the resistance of C. albicans to antifungal drugs, osmotic and cell wall stresses. Similar trends were observed in clinical isolates and other pathogenic Candida species. The increased stress resistance of C. albicans was not dependent on key stress (Hog1) and cell integrity (Mkc1) signalling pathways. Instead, increased stress resistance was promoted by major changes in the architecture and biophysical properties of the cell wall. Glucose- and lactate-grown cells displayed significant differences in cell wall mass, ultrastructure, elasticity and adhesion. Changes in carbon source also altered the virulence of C. albicans in models of systemic candidiasis and vaginitis, confirming the importance of alternative carbon sources within host niches during C. albicans infections.

Transcriptional response of Candida albicans upon internalization by macrophages.

Gerald Fink,  J Bender,  Robert Lorenz (2004)
The opportunistic fungal pathogen Candida albicans is both a benign gut commensal and a frequently fatal systemic pathogen. The interaction of C. albicans with the host's innate immune system is the primary factor in this balance; defects in innate immunity predispose the patient to disseminated candidiasis. Because of the central importance of phagocytic cells in defense against fungal infections, we have investigated the response of C. albicans to phagocytosis by mammalian macrophages using genomic transcript profiling. This analysis reveals a dramatic reprogramming of transcription in C. albicans that occurs in two successive steps. In the early phase cells shift to a starvation mode, including gluconeogenic growth, activation of fatty acid degradation, and downregulation of translation. In a later phase, as hyphal growth enables C. albicans to escape from the macrophage, cells quickly resume glycolytic growth. In addition, there is a substantial nonmetabolic response imbedded in the early phase, including machinery for DNA damage repair, oxidative stress responses, peptide uptake systems, and arginine biosynthesis. Further, a surprising percentage of the genes that respond specifically to macrophage contact have no known homologs, suggesting that the organism has undergone substantial evolutionary adaptations to the commensal or pathogen lifestyle. This transcriptional reprogramming is almost wholly absent in the related, but nonpathogenic, yeast Saccharomyces cerevisiae, suggesting that these large-scale and coordinated changes contribute significantly to the ability of this organism to survive and cause disease in vivo.

D Diekema,  Michael Pfaller (2009)
The incidence of invasive mycoses is increasing, especially among patients who are immunocompromised or hospitalized with serious underlying diseases. Such infections may be broken into two broad categories: opportunistic and endemic. The most important agents of the opportunistic mycoses are Candida spp., Cryptococcus neoformans, Pneumocystis jirovecii, and Aspergillus spp. (although the list of potential pathogens is ever expanding); while the most commonly encountered endemic mycoses are due to Histoplasma capsulatum, Coccidioides immitis/posadasii, and Blastomyces dermatitidis. This review discusses the epidemiologic profiles of these invasive mycoses in North America, as well as risk factors for infection, and the pathogens' antifungal susceptibility.

Re-use of this article is permitted in accordance with the Terms and Conditions set out at http://wileyonlinelibrary.com/onlineopen#OnlineOpen_Terms.