Effect of meteorological variables on the incidence of hand, foot, and mouth disease in children: a time-series analysis in Guangzhou, China 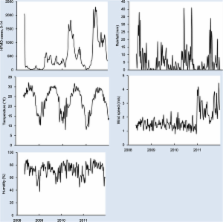 Over the last decade, major outbreaks of hand, foot, and mouth disease (HFMD) have been reported in Asian countries, resulting in thousands of deaths among children. However, less is known regarding the effect of meteorological variables on the incidence of HFMD in children. This study aims at quantifying the relationship between meteorological variables and the incidence of HFMD among children in Guangzhou, China.

The association between weekly HFMD cases in children aged <15 years and meteorological variables in Guangzhou from 2008 to 2011 were analyzed using the generalized additive model (GAM) and time-series method, after controlling for long-term trend and seasonality, holiday effects, influenza period and delayed effects.

This study provides quantitative evidence that the incidence of HFMD in children was associated with high average temperature and high relative humidity. The one-week delay in the effects of temperature and relative humidity on HFMD is consistent with the enterovirus incubation period and the potential time lag between onset of children’s sickness and parental awareness and response.

Jonathan A. Patz, Diarmid Campbell-Lendrum, Tracey Holloway … (2005)
The World Health Organisation estimates that the warming and precipitation trends due to anthropogenic climate change of the past 30 years already claim over 150,000 lives annually. Many prevalent human diseases are linked to climate fluctuations, from cardiovascular mortality and respiratory illnesses due to heatwaves, to altered transmission of infectious diseases and malnutrition from crop failures. Uncertainty remains in attributing the expansion or resurgence of diseases to climate change, owing to lack of long-term, high-quality data sets as well as the large influence of socio-economic factors and changes in immunity and drug resistance. Here we review the growing evidence that climate-health relationships pose increasing health risks under future projections of climate change and that the warming trend over recent decades has already contributed to increased morbidity and mortality in many regions of the world. Potentially vulnerable regions include the temperate latitudes, which are projected to warm disproportionately, the regions around the Pacific and Indian oceans that are currently subjected to large rainfall variability due to the El Niño/Southern Oscillation sub-Saharan Africa and sprawling cities where the urban heat island effect could intensify extreme climatic events.

Anthony J McMichael, Rosalie Woodruff, Simon Hales (2006)
There is near unanimous scientific consensus that greenhouse gas emissions generated by human activity will change Earth's climate. The recent (globally averaged) warming by 0.5 degrees C is partly attributable to such anthropogenic emissions. Climate change will affect human health in many ways-mostly adversely. Here, we summarise the epidemiological evidence of how climate variations and trends affect various health outcomes. We assess the little evidence there is that recent global warming has already affected some health outcomes. We review the published estimates of future health effects of climate change over coming decades. Research so far has mostly focused on thermal stress, extreme weather events, and infectious diseases, with some attention to estimates of future regional food yields and hunger prevalence. An emerging broader approach addresses a wider spectrum of health risks due to the social, demographic, and economic disruptions of climate change. Evidence and anticipation of adverse health effects will strengthen the case for pre-emptive policies, and will also guide priorities for planned adaptive strategies.

M. Ho, E Chen, K H Hsu … (1999)
Enteroviruses can cause outbreaks of hand-foot-and-mouth disease (characterized by vesicular lesions on the hands, feet, and oral mucosa) or herpangina, usually without life-threatening manifestations. In 1998 an epidemic of enterovirus 71 infection caused hand-foot-and-mouth disease and herpangina in thousands of people in Taiwan, some of whom died. We assessed the epidemiologic aspects of this outbreak. Cases of hand-foot-and-mouth disease or herpangina in ambulatory patients were reported to the Taiwan Department of Health by a mean of 818 sentinel physicians. Severe cases in hospitalized patients were reported by 40 medical centers and regional hospitals. Viruses were isolated by 10 hospital laboratories and the department of health. The sentinel physicians reported 129,106 cases of hand-foot-and-mouth disease or herpangina in two waves of the epidemic, which probably represents less than 10 percent of the estimated total number of cases. There were 405 patients with severe disease, most of whom were five years old or younger; severe disease was seen in all regions of the island. Complications included encephalitis, aseptic meningitis, pulmonary edema or hemorrhage, acute flaccid paralysis, and myocarditis. Seventy-eight patients died, 71 of whom (91 percent) were five years of age or younger. Of the patients who died, 65 (83 percent) had pulmonary edema or pulmonary hemorrhage. Among patients from whom a virus was isolated, enterovirus 71 was present in 48.7 percent of outpatients with uncomplicated hand-foot-and-mouth disease or herpangina, 75 percent of hospitalized patients who survived, and 92 percent of patients who died. Although several enteroviruses were circulating in Taiwan during the 1998 epidemic, enterovirus 71 infection was associated with most of the serious clinical manifestations and with nearly all the deaths. Most of those who died were young, and the majority died of pulmonary edema and pulmonary hemorrhage.