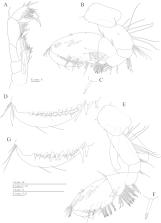 A new species of pseudocrangonyctid amphipod, Pseudocrangonyx wonkimi sp. nov., was found in the groundwater of a cave in the southwestern Korean Peninsula. Pseudocrangonyx wonkimi sp. nov. is morphologically most closely related to P. joolaei Lee et al., 2020. However, P. wonkimi is clearly distinguished from P. joolaei by lacking sternal gills, fewer setae on maxilla 1 inner plate, fewer serrate robust setae on the carpus of the gnathopods, lacking bifid setae on the inner ramus of pleopod 3, and fewer articles of rami on pleopod 3. We also determined sequences of mitochondrial cytochrome c oxidase subunit I (COI) of P. wonkimi sp. nov. for molecular diagnosis. From the molecular analysis based on COI sequences, P. wonkimi showed the closest relationship with P. joolaei with 15.1% genetic distance.

Pattern and process in the biogeography of subterranean amphipods

A molecular phylogeny of Pseudocrangonyx from Japan, including a new subterranean species (Crustacea, Amphipoda, Pseudocrangonyctidae)

Ko Tomikawa, Takafumi Nakano, Anna Sato … (2016)
A subterranean species of pseudocrangonyctid amphipod, Pseudocrangonyx gudariensis Tomikawa & Sato, sp. n., is described from the spring-fed stream Gudari-numa in Hakkoda Mountains, Aomori Prefecture, northern Japan. Pseudocrangonyx gudariensis is morphologically similar to P. coreanus Uéno, 1966 and P. febras Sidorov, 2009 based on its relatively small body size, small number of articles of rami of pleopods, and urosomite 1 without basal setae. However, P. gudariensis is distinguished from those species based on the following characteristics: from P. coreanus, antenna 2 of female without calceoli, palmar margins of gnathopods 1 and 2 with distally notched robust setae, inner margin of inner ramus of uropod 2 with 4 robust setae, and basal part of inner ramus of uropod 2 without slender seta; and from P. febras, carpus of gnathopod 2 without serrate robust setae on posterodistal corners, peduncle of pleopods 1 and 2 with setae, and longer article 2 of uropod 3. Phylogenetic analyses using nuclear 28S rRNA and histone H3, and mitochondrial cytochrome c oxidase subunit I and 16S rRNA markers showed that P. gudariensis is placed among known Pseudocrangonyx Akatsuka and Komai, 1922 species. However, its exact phylogenetic position within the genus could not be determined. The polyphyly of the Japanese Pseudocrangonyx species indicates that multiple colonization events of Pseudocrangonyx ancestors to the Japanese Archipelago could have occurred. The reliability of the past Pseudocrangonyx records from Japan is briefly discussed.