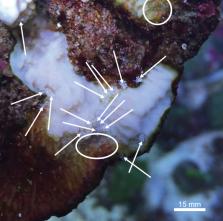 Phestilla subodiosus sp. nov. ( Nudibranchia : Trinchesiidae ) is a novel species that feeds on corals in the genus Montipora ( Scleractinia : Acroporidae ) which are economically important in the aquarium industry. Nuclear-encoded H3, 28SC1-C2, and mitochondrial-encoded COI and 16S markers were sequenced. Phylogenetic analysis, Automatic Barcode Gap Discovery (ABGD), morphological data, and feeding specialization all support the designation of Phestilla subodiosus sp. nov. as a distinct species. Although new to science, Phestilla subodiosus sp. nov. had been extensively reported by aquarium hobbyists as a prolific pest over the past two decades. The species fell into a well-studied genus, which could facilitate research into its control in reef aquaria. Our phylogenetic analysis also revealed Tenellia chaetopterana formed a well-supported clade with Phestilla . Based upon a literature review, its original morphological description, and our phylogenetic hypothesis, we reclassified this species as Phestilla chaetopterana comb. nov.

Itamar Sela,  Haim Ashkenazy,  Kazutaka Katoh … (2015)
Inference of multiple sequence alignments (MSAs) is a critical part of phylogenetic and comparative genomics studies. However, from the same set of sequences different MSAs are often inferred, depending on the methodologies used and the assumed parameters. Much effort has recently been devoted to improving the ability to identify unreliable alignment regions. Detecting such unreliable regions was previously shown to be important for downstream analyses relying on MSAs, such as the detection of positive selection. Here we developed GUIDANCE2, a new integrative methodology that accounts for: (i) uncertainty in the process of indel formation, (ii) uncertainty in the assumed guide tree and (iii) co-optimal solutions in the pairwise alignments, used as building blocks in progressive alignment algorithms. We compared GUIDANCE2 with seven methodologies to detect unreliable MSA regions using extensive simulations and empirical benchmarks. We show that GUIDANCE2 outperforms all previously developed methodologies. Furthermore, GUIDANCE2 also provides a set of alternative MSAs which can be useful for downstream analyses. The novel algorithm is implemented as a web-server, available at: http://guidance.tau.ac.il.

A 28S rRNA-based phylogeny of the gnathostomes: first steps in the analysis of conflict and congruence with morphologically based cladograms.

R Perasso,  Guillaume Lecointre,  Lawrence H Le (1993)
Approximately 500 nucleotides of 28S rRNA of 31 species of gnathostomes have been sequenced in order to study the phylogeny of the major fish lineages. In maximum parsimony trees, nodes congruent with those of the morphologically based cladogram were found to be robust (chondrichthyans, neopterygians, euteleosteans), but some expected monophyletic groups were not found to be so (lissamphibians, tetrapods, osteichthyans). Possible causes for these discrepancies are discussed. Some non-congruent nodes were significantly supported (elopomorph-osteoglossomorph sister-group relationships and clupeomorph-ostariophysan relationships) and the need for new morphological character analysis is discussed. In addition, the relationships of major gnathostome lineages (chondrichthyans, actinopterygians, sarcopterygyans) could not be resolved and the possibility of their rapid evolutionary radiation is examined. This result is strikingly similar to those obtained from approximately 1800 nucleotides of 18S rRNA. Variations in the robustness of some nodes depending on the species sample were observed. This has led to a systematic study of the effect of species sampling on bootstrap values described in a companion paper (G. Lecointre, H. Philippe, H. L. V. Lê, and H. Le Guyader, submitted for publication).