Thymol polymeric nanoparticle synthesis and its effects on the toxicity of high glucose on OEC cells: involvement of growth factors and integrin‐linked kinase 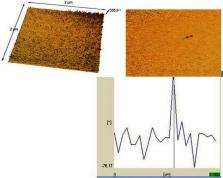 Nowadays, the drug delivery system is important in the treatment of diseases.

A polymeric nanoparticle modified by oleic acid (NPMO) as a Thymol (Thy) drug release system was synthesized from Thymbra spicata and its neurotrophic and angiogenic effects on rat’s olfactory ensheathing cells (OECs) in normal (NG) and high glucose (HG) conditions were studied.

OECs were protected by ThyNPMO and ENPMO in protective concentrations by reducing the amount of ROS and NO, maintaining ILK, reducing VEGF, and increasing BDNF and NGF. The mentioned mechanisms were totally reversed at high concentrations.

Y. Hu,  Darrell Irvine,  S. Chen … (2008)
Nanoscale objects are typically internalized by cells into membrane-bounded endosomes and fail to access the cytosolic cell machinery. Whereas some biomacromolecules may penetrate or fuse with cell membranes without overt membrane disruption, no synthetic material of comparable size has shown this property yet. Cationic nano-objects pass through cell membranes by generating transient holes, a process associated with cytotoxicity. Studies aimed at generating cell-penetrating nanomaterials have focused on the effect of size, shape and composition. Here, we compare membrane penetration by two nanoparticle 'isomers' with similar composition (same hydrophobic content), one coated with subnanometre striations of alternating anionic and hydrophobic groups, and the other coated with the same moieties but in a random distribution. We show that the former particles penetrate the plasma membrane without bilayer disruption, whereas the latter are mostly trapped in endosomes. Our results offer a paradigm for analysing the fundamental problem of cell-membrane-penetrating bio- and macro-molecules.

D. Adams,  Afsaneh Lavasanifar,  Sunoh Kwon (2003)
Amphiphilic block copolymers (ABCs) have been used extensively in pharmaceutical applications ranging from sustained-release technologies to gene delivery. The utility of ABCs for delivery of therapeutic agents results from their unique chemical composition, which is characterized by a hydrophilic block that is chemically tethered to a hydrophobic block. In aqueous solution, polymeric micelles are formed via the association of ABCs into nanoscopic core/shell structures at or above the critical micelle concentration. Upon micellization, the hydrophobic core regions serve as reservoirs for hydrophobic drugs, which may be loaded by chemical, physical, or electrostatic means, depending on the specific functionalities of the core-forming block and the solubilizate. Although the Pluronics, composed of poly(ethylene oxide)-block-poly(propylene oxide)-block-poly(ethylene oxide), are the most widely studied ABC system, copolymers containing poly(L-amino acid) and poly(ester) hydrophobic blocks have also shown great promise in delivery applications. Because each ABC has unique advantages with respect to drug delivery, it may be possible to choose appropriate block copolymers for specific purposes, such as prolonging circulation time, introduction of targeting moieties, and modification of the drug-release profile. ABCs have been used for numerous pharmaceutical applications including drug solubilization/stabilization, alteration of the pharmacokinetic profile of encapsulated substances, and suppression of multidrug resistance. The purpose of this minireview is to provide a concise, yet detailed, introduction to the use of ABCs and polymeric micelles as delivery agents as well as to highlight current and past work in this area. Copyright 2003 Wiley-Liss, Inc. and the American Pharmacists Association

A Lexi Mentzer,  James B W Russell,  Isabel Vincent … (2002)
The current study examines the association between glucose induction of reactive oxygen species (ROS), mitochondrial (Mt) depolarization, and programmed cell death in primary neurons. In primary dorsal root ganglion (DRG) neurons, 45 mM glucose rapidly induces a peak rise in ROS corresponding to a 50% increase in mean Mt size at 6 h (P<0.001). This is coupled with loss of regulation of the Mt membrane potential (Mt membrane hyperpolarization, followed by depolarization, MMD), partial depletion of ATP, and activation of caspase-3 and -9. Glucose-induced activation of ROS, MMD, and caspase-3 and -9 activation is inhibited by myxothiazole and thenoyltrifluoroacetone (P<0.001), which inhibit specific components of the Mt electron transfer chain. Similarly, MMD and caspase-3 activation are inhibited by 100 microM bongkrekic acid (an inhibitor of the adenosine nucleotide translocase ANT). These results indicate that mild increases in glucose induce ROS and Mt swelling that precedes neuronal apoptosis. Glucotoxicity is blocked by inhibiting ROS induction, MMD, or caspase cleavage by specific inhibitors of electron transfer, or by stabilizing the ANT.