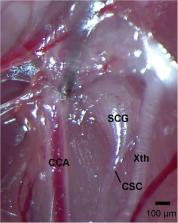 The cervical sympathetic chain (CSC) innervates post-ganglionic sympathetic neurons within the ipsilateral superior cervical ganglion (SCG) of all mammalian species studied to date. The post-ganglionic neurons within the SCG project to a wide variety of structures, including the brain (parenchyma and cerebral arteries), upper airway (e.g., nasopharynx and tongue) and submandibular glands. The SCG also sends post-ganglionic fibers to the carotid body (e.g., chemosensitive glomus cells and microcirculation), however, the function of these connections are not established in the mouse. In addition, nothing is known about the functional importance of the CSC-SCG complex (including input to the carotid body) in the mouse. The objective of this study was to determine the effects of bilateral transection of the CSC on the ventilatory responses [e.g., increases in frequency of breathing (Freq), tidal volume (TV) and minute ventilation (MV)] that occur during and following exposure to a hypoxic gas challenge (10% O 2 and 90% N 2) in freely-moving sham-operated (SHAM) adult male C57BL6 mice, and in mice in which both CSC were transected (CSCX). Resting ventilatory parameters (19 directly recorded or calculated parameters) were similar in the SHAM and CSCX mice. There were numerous important differences in the responses of CSCX and SHAM mice to the hypoxic challenge. For example, the increases in Freq (and associated decreases in inspiratory and expiratory times, end expiratory pause, and relaxation time), and the increases in MV, expiratory drive, and expiratory flow at 50% exhaled TV (EF 50) occurred more quickly in the CSCX mice than in the SHAM mice, although the overall responses were similar in both groups. Moreover, the initial and total increases in peak inspiratory flow were higher in the CSCX mice. Additionally, the overall increases in TV during the latter half of the hypoxic challenge were greater in the CSCX mice. The ventilatory responses that occurred upon return to room-air were essentially similar in the SHAM and CSCX mice. Overall, this novel data suggest that the CSC may normally provide inhibitory input to peripheral (e.g., carotid bodies) and central (e.g., brainstem) structures that are involved in the ventilatory responses to hypoxic gas challenge in C57BL6 mice.

A protocol for high-throughput phenotyping, suitable for quantitative trait analysis in mice.

Douglas Higgs,  Ross Davidson,  Youming Zhang … (2006)
Whole-genome genetic association studies in outbred mouse populations represent a novel approach to identifying the molecular basis of naturally occurring genetic variants, the major source of quantitative variation between inbred strains of mice. Measuring multiple phenotypes in parallel on each mouse would make the approach cost effective, but protocols for phenotyping on a large enough scale have not been developed. In this article we describe the development and deployment of a protocol to collect measures on three models of human disease (anxiety, type II diabetes, and asthma) as well as measures of mouse blood biochemistry, immunology, and hematology. We report that the protocol delivers highly significant differences among the eight inbred strains (A/J, AKR/J, BALBc/J, CBA/J, C3H/HeJ, C57BL/6 J, DBA/2 J, and LP/J), the progenitors of a genetically heterogeneous stock (HS) of mice. We report the successful collection of multiple phenotypes from 2000 outbred HS animals. The phenotypes measured in the protocol form the basis of a large-scale investigation into the genetic basis of complex traits in mice designed to examine interactions between genes and between genes and environment, as well as the main effects of genetic variants on phenotypes.

The sensory and sympathetic innervation of guinea-pig lung and trachea as studied by retrograde neuronal tracing and double-labelling immunohistochemistry.

W. Kummer,  A. Fischer,  R Kurkowski … (1992)
The sympathetic and sensory innervation of guinea-pig trachea and lung were studied by means of retrograde neuronal tracing using fluorescent dyes, and double-labelling immunofluorescence. Sympathetic neurons supplying the lung were located in stellate ganglia and in thoracic sympathetic chain ganglia T2-T4; those supplying the trachea resided in the superior cervical and stellate ganglia. Retrogradely labelled sympathetic neurons were usually immunoreactive to tyrosine hydroxylase; the majority also contained neuropeptide Y immunoreactivity. However, a small number were non-catecholaminergic (i.e. tyrosine hydroxylase negative), but neuropeptide Y immunoreactive. Within the airways, tyrosine hydroxylase/neuropeptide Y-immunoreactive axons were found in the smooth muscle layer, around blood vessels including the pulmonary artery and vein, and to a lesser extent in the lamina propria. Periarterial axons contained in addition dynorphin immunoreactivity. Sensory neurons supplying the lung were located in jugular and nodose vagal ganglia as well as in upper thoracic dorsal root ganglia; those supplying the trachea were most frequently found bilaterally in the nodose ganglia and less frequently in the jugular ganglia. A spinal origin of tracheal sensory fibres could not be consistently demonstrated. With regard to their immunoreactivity to peptides, three types of sensory neurons projecting to the airways could be distinguished: (i) substance P/dynorphin immunoreactive; (ii) substance P immunoreactive but dynorphin negative; and (iii) negative to all peptides tested. Substance P-immunoreactive neurons innervating the airways invariably contained immunoreactivity to neurokinin A and calcitonin gene-related peptide. Retrogradely labelled neurons located in the nodose ganglia belonged almost exclusively (greater than or equal to 99%) to the peptide-negative group, whereas the three neuron types each represented about one-third of retrogradely labelled neurons in jugular and dorsal root ganglia. Within the airways, axons immunoreactive to substance P/neurokinin A and substance P/calcitonin gene-related peptide were distributed within the respiratory epithelium of trachea and large bronchi, in the lamina propria and smooth muscle from the trachea down to the smallest bronchioli (highest density at the bronchial level), in the alveolar walls, around systemic and pulmonary blood vessels, and within airway ganglia. Those axons also containing dynorphin immunoreactivity were restricted to the lamina propria and smooth muscle. The origin of nerve fibres immunoreactive for vasoactive intestinal polypeptide, of which a part were also neuropeptide Y immunoreactive, could not be determined by retrograde tracing experiments. Vasoactive intestinal polypeptide-immunoreactive fibres terminating within airway ganglia may be of preganglionic parasympathetic origin, whereas others (e.g. those found in smooth muscle) may arise from intrinsic ganglia.(ABSTRACT TRUNCATED AT 400 WORDS)

This article was submitted to Respiratory Physiology, a section of the journal Frontiers in Physiology