Effects of Zinc supplementation on serum lipids: a systematic review and meta-analysis 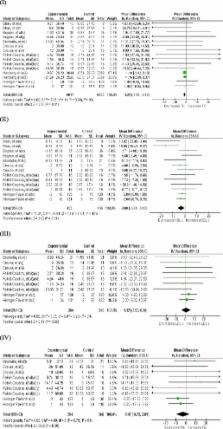 Zinc is a mineral that plays a vital role in many biological processes and plays an important role in insulin action and carbohydrate metabolism. It may also have a protective role in the prevention of atherogenesis. Numerous studies have evaluated the effects of Zinc supplementation on serum lipids in humans and have demonstrated varying results. We systematically evaluated the literature and performed a meta-analysis on the effects of Zinc supplementation on serum lipids. A five staged comprehensive search of the literature was conducted in the following databases; PubMed, Web of Science and SciVerse Scopus for studies published before 31st December 2014. All controlled clinical trial in humans, that included a Zinc supplement intervention, either alone or in combination with other micronutrients and evaluated effects on serum lipids (total cholesterol [TC], triglycerides [TG], LDL cholesterol [LDL-c] and HDL cholesterol [HDL-c]). A meta-analysis of selected studies was performed using RevMan v5.3. The Jaded scale was used to assess the methodological quality of the trials included in the systematic review. A total of 24 studies were included in Meta analysis, which included a total of 33 Zinc interventions, in a total of 14,515 participants in the Zinc intervention or control group. The duration of Zinc supplementation ranged from 1 month to 7.5 years. The dose of elemental Zinc supplemented ranged from 15–240 mg/day. The pooled mean difference for TC between Zinc supplemented and placebo groups from random effects analysis was −10.92 mg/dl (95 % CI: −15.33, −6.52; p < 0.0001, I 2 = 83 %), while for HDL cholesterol it was 2.12 mg/dl (95 % CI: −0.74, 4.98; p = 0.15, I 2 = 83 %). The pooled mean difference for LDL-c between Zinc supplemented and placebo group from random effect analysis was −6.87 mg/dl (95 % CI: −11.16,-2.58; p < 0.001, I 2 = 31) and for TG it was −10.92 mg/dl (95 % CI: −18.56, − 3.28; p < 0.01, I 2 = 69 %). In conclusion, Zinc supplementation has favourable effects on plasma lipid parameters. Zinc supplementation significantly reduced total cholesterol, LDL cholesterol and triglycerides. Therefore it may have the potential to reduce the incidence of atherosclerosis related morbidity and mortality.

John Austin,  J Hokanson (1996)
Despite nearly 40 years of research, the role of plasma triglyceride as a risk factor for cardiovascular disease remains elusive. The objectives of the present study were to quantify the magnitude of the association between triglyceride and cardiovascular disease in the general population, and to determine whether this relationship is independent of high-density lipoprotein (HDL) cholesterol, using the semi-quantitative techniques of metaanalysis. Seventeen studies were selected for the analysis based on published reports of population-based, prospective studies, including 46413 men and 10864 women. To insure comparability, only studies reporting the association between fasting triglyceride levels and incident cardiovascular endpoints were included. Using standard meta-analysis calculations, relative risks (RR) and 95% confidence intervals (CI) were calculated and standardized with respect to a 1 mmol/l increase in triglyceride. Multivariable-adjusted RRs were determined for the six studies in men and two studies in women that reported adjustments for HDL cholesterol. For men and women, the univariate RRs for triglyceride were 1.32 (95% Cl 1.26-1.39) and 1.76 (95% Cl 1.50-2.07), respectively, indicating an approximately 30% increased risk in men and a 75% increase in women. Adjustment of HDL cholesterol and other risk factors attenuated these RRs to 1.14 (95% Cl 1.05-1.28) and 1.37 (95% Cl 1.13-1.66), respectively, which were still statistically significant values. Based on combined data from prospective studies, triglyceride is a risk factor for cardiovascular disease for both men and women in the general population, independent of HDL cholesterol. These finding demonstrate the necessity for clinical trials to evaluate whether lowering plasma triglyceride decreases the risk of cardiovascular disease.

A D Mooradian (2009)
Dyslipidemia is one of the major risk factors for cardiovascular disease in diabetes mellitus. The characteristic features of diabetic dyslipidemia are a high plasma triglyceride concentration, low HDL cholesterol concentration and increased concentration of small dense LDL-cholesterol particles. The lipid changes associated with diabetes mellitus are attributed to increased free fatty acid flux secondary to insulin resistance. The availability of multiple lipid-lowering drugs and supplements provides new opportunities for patients to achieve target lipid levels. However, the variety of therapeutic options poses a challenge in the prioritization of drug therapy. The prevalence of hypercholesterolemia is not increased in patients with diabetes mellitus, but mortality from coronary heart disease increases exponentially as a function of serum cholesterol levels, and lowering of cholesterol with statins reduces diabetic patients' relative cardiovascular risk. Although drug therapy for dyslipidemia must be individualized, most people with diabetes mellitus are candidates for statin therapy, and often need treatment with multiple agents to achieve therapeutic goals.

The biochemical basis of zinc physiology.