Parasitic infestation in appendicitis. A retrospective analysis of 660 patients and brief literature review 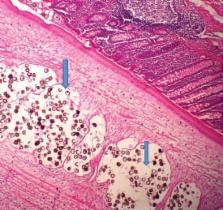 To investigate the incidence of parasitic infestations and inflammation accompanying parasitosis in a series of appendectomy cases.

Six-hundred-sixty patients who had undergone appendectomy in Bingöl State Hospital, Bingol, Turkey with the preliminary diagnosis of appendicitis between January 2012 and February 2015 were included in this retrospective study. They were retrospectively evaluated in terms of age, gender and pathological findings. Cases diagnosed with parasitic infestations were re-evaluated histopathologically for inflammatory response.

Parasitic infestations are among the probable causes in appendicitis etiology and should be kept in mind during differential diagnosis. However, whether every parasitic infestation leads to appendiceal inflammatory response is controversial.

Nilgun Sogutcu,  Sami Akbulut,  Mahmut Tas … (2011)
To document unusual findings in appendectomy specimens. The clinicopathological data of 5262 patients who underwent appendectomies for presumed acute appendicitis from January 2006 to October 2010 were reviewed retrospectively. Appendectomies performed as incidental procedures during some other operation were excluded. We focused on 54 patients who had unusual findings in their appendectomy specimens. We conducted a literature review via the PubMed and Google Scholar databases of English language studies published between 2000 and 2010 on unusual findings in appendectomy specimens. Unusual findings were determined in 54 (1%) cases by histopathology. Thirty were male and 24 were female with ages ranging from 15 to 84 years (median, 32.2 ± 15.1 years). Final pathology revealed 37 cases of enterobiasis, five cases of carcinoids, four mucinous cystadenomas, two eosinophilic infiltrations, two mucoceles, two tuberculosis, one goblet-cell carcinoid, and one neurogenic hyperplasia. While 52 patients underwent a standard appendectomy, two patients who were diagnosed with tuberculous appendicitis underwent a right hemicolectomy. All tumors were located at the distal part of the appendix with a mean diameter of 6.8 mm (range, 4-10 mm). All patients with tumors were alive and disease-free during a mean follow-up of 17.8 mo. A review of 1366 cases reported in the English literature is also discussed. Although unusual pathological findings are seldom seen during an appendectomy, all appendectomy specimens should be sent for routine histopathological examination.

Presidential Address: a history of appendicitis. With anecdotes illustrating its importance.

Bryan Williams (1983)
Two hundred years after its anatomical description, the appendix was observed to be the site of inflammatory disease. This was not widely accepted until the publication by Fitz 120 years later. American surgeons led in demonstrating that early appendectomy was safe and life saving. Perforation of the appendix with peritonitis continues to be a significant problem, but the mortality rate has dramatically declined. Appendiceal disease has clearly affected the course of history.

Enterobius vermicularis infestation of the appendix and management at the time of laparoscopic appendectomy: case series and literature review.

A V Ariyarathenam,  S Nachimuthu,  T-Y Tang … (2010)
Enterobius vermicularis infestation of the vermiform appendix can mimic appendicitis. In these cases, laparoscopic appendicectomy runs a risk of contamination of the peritoneal cavity with worms. We reviewed our practice to suggest changes that will reduce the release of worms and propose methods to use in case contamination occurs.