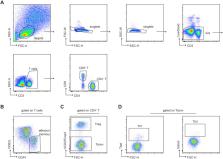 Listeria monocytogenes (Lm) is a food-borne pathogen with a high chance of infecting neonates, pregnant women, elderly and immunocompromised individuals. Lm infection in neonates can cause neonatal meningitis and sepsis with a high risk of severe neurological and developmental sequelae and high mortality rates. However, whether an acute neonatal Lm infection causes long-term effects on the immune system persisting until adulthood has not been fully elucidated. Here, we established a neonatal Lm infection model and monitored the composition of major immune cell subsets at defined time points post infection (p.i.) in secondary lymphoid organs and the intestine. Twelve weeks p.i., the CD8 + T cell population was decreased in colon and mesenteric lymph nodes (mLNs) with an opposing increase in the spleen. In the colon, we observed an accumulation of CD4 + and CD8 + effector/memory T cells with an increase of T-bet + T helper 1 (Th1) cells. In addition, 12 weeks p.i. an altered composition of innate lymphoid cell (ILC) and dendritic cell (DC) subsets was still observed in colon and mLNs, respectively. Together, these findings highlight organ-specific long-term consequences of an acute neonatal Lm infection on both the adaptive and innate immune system.

Richard Hughes,  David Cornblath (2005)
Guillain-Barré syndrome consists of at least four subtypes of acute peripheral neuropathy. Major advances have been made in understanding the mechanisms of some of the subtypes. The histological appearance of the acute inflammatory demyelinating polyradiculoneuropathy (AIDP) subtype resembles experimental autoimmune neuritis, which is predominantly caused by T cells directed against peptides from the myelin proteins P0, P2, and PMP22. The role of T-cell-mediated immunity in AIDP remains unclear and there is evidence for the involvement of antibodies and complement. Strong evidence now exists that axonal subtypes of Guillain-Barré syndrome, acute motor axonal neuropathy (AMAN), and acute motor and sensory axonal neuropathy (AMSAN), are caused by antibodies to gangliosides on the axolemma that target macrophages to invade the axon at the node of Ranvier. About a quarter of patients with Guillain-Barré syndrome have had a recent Campylobacter jejuni infection, and axonal forms of the disease are especially common in these people. The lipo-oligosaccharide from the C jejuni bacterial wall contains ganglioside-like structures and its injection into rabbits induces a neuropathy that resembles acute motor axonal neuropathy. Antibodies to GM1, GM1b, GD1a, and GalNac-GD1a are in particular implicated in acute motor axonal neuropathy and, with the exception of GalNacGD1a, in acute motor and sensory axonal neuropathy. The Fisher's syndrome subtype is especially associated with antibodies to GQ1b, and similar cross-reactivity with ganglioside structures in the wall of C jejuni has been discovered. Anti-GQ1b antibodies have been shown to damage the motor nerve terminal in vitro by a complement-mediated mechanism. Results of international randomised trials have shown equivalent efficacy of both plasma exchange and intravenous immunoglobulin, but not corticosteroids, in hastening recovery from Guillain-Barré syndrome. Further research is needed to discover treatments to prevent 20% of patients from being left with persistent and significant disability.

The epidemiology of human listeriosis.

Bala Swaminathan,  Peter Gerner-Smidt (2007)
Listeriosis is a serious invasive disease that primarily afflicts pregnant women, neonates and immunocompromised adults. The causative organism, Listeria monocytogenes, is primarily transmitted to humans through contaminated foods. Outbreaks of listeriosis have been reported in North America, Europe and Japan. Soft cheeses made from raw milk and ready-to-eat meats are high risk foods for susceptible individuals. Efforts by food processors and food regulatory agencies to aggressively control L. monocytogenes in the high risk foods have resulted in significant decreases in the incidence of sporadic listeriosis.

An outbreak of gastroenteritis and fever due to Listeria monocytogenes in milk.

Robert P. Hayes,  B. Swaminathan,  C. Dalton … (1997)
After an outbreak of gastroenteritis and fever among persons who attended a picnic in Illinois, chocolate milk served at the picnic was found to be contaminated with Listeria monocytogenes. In investigating this outbreak, we interviewed the people who attended the picnic about what they ate and their symptoms. Surveillance for invasive listeriosis was initiated in the states that receive milk from the implicated dairy. Stool and milk samples were cultured for L. monocytogenes. Serum samples were tested for IgG antibody to listeriolysin O. Forty-five persons had symptoms that met the case definition for illness due to L. monocytogenes, and cultures of stool from 11 persons yielded the organism. Illness in the week after the picnic was associated with the consumption of chocolate milk. The most common symptoms were diarrhea (present in 79 percent of the cases) and fever (72 percent). Four persons were hospitalized. The median incubation period for infection was 20 hours (range, 9 to 32), and persons who became ill had elevated levels of antibody to listeriolysin O. Isolates from stool specimens from patients who became ill after the picnic, from sterile sites in three additional patients identified by surveillance, from the implicated chocolate milk, and from a tank drain at the dairy were all serotype 1/2b and were indistinguishable on multilocus enzyme electrophoresis, ribotyping, and DNA macrorestriction analysis. L. monocytogenes is a cause of gastroenteritis with fever, and sporadic cases of invasive listeriosis may be due to unrecognized outbreaks caused by contaminated food.