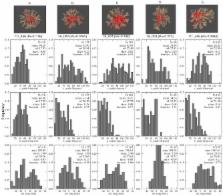 The growth of scleractinian corals is strongly influenced by the effect of water motion. Corals are known to have a high level of phenotypic variation and exhibit a diverse range of growth forms, which often contain a high level of geometric complexity. Due to their complex shape, simulation models represent an important option to complement experimental studies of growth and flow. In this work, we analyzed the impact of flow on coral's morphology by an accretive growth model coupled with advection-diffusion equations. We performed simulations under no-flow and uni-directional flow setup with the Reynolds number constant. The relevant importance of diffusion to advection was investigated by varying the diffusion coefficient, rather than the flow speed in Péclet number. The flow and transport equations were coupled and solved using COMSOL Multiphysics. We then compared the simulated morphologies with a series of Computed Tomography (CT) scans of scleractinian corals Pocillopora verrucosa exposed to various flow conditions in the in situ controlled flume setup. As a result, we found a similar trend associated with the increasing Péclet for both simulated forms and in situ corals; that is uni-directional current tends to facilitate asymmetrical growth response resulting in colonies with branches predominantly developed in the upstream direction. A closer look at the morphological traits yielded an interesting property about colony symmetry and plasticity induced by uni-directional flow. Both simulated and in situ corals exhibit a tendency where the degree of symmetry decreases and compactification increases in conjunction with the augmented Péclet thus indicates the significant importance of hydrodynamics.

A long-standing question in marine biology and coral biology is the morphological plasticity of corals, sponges and other marine sessile organisms and the influence of water movement. Usually branching species tend to develop symmetrical colonies where branches are being formed in all directions. There is a long standing discussion if this process in which colonies develop symmetrical colonies is controlled by genes or by the environment. In this work, we address this question for the scleractinian coral Pocillopora verrucosa. We first have acquired coral colonies from a controlled in-situ flow experiment where the coral was growing under uni-directional flow conditions. The corals colonies were scanned using a Computed Tomography (CT) technique used for medical imaging and industrial imaging. We have developed a simulation for the growth and form of corals and the influence of water movement. We have compared the simulated morphologies to the three dimensional images obtained with the CT scanner. We have found that coral's branches predominantly develop in the upstream part of the colony and an asymmetrical colony is being formed under uni-directional flow conditions. Our results confirm that growth of the coral is strongly influenced by the flow conditions.

Effect of Nutrient Diffusion and Flow on Coral Morphology.

How Plastic Can Phenotypic Plasticity Be? The Branching Coral Stylophora pistillata as a Model System

Lee Shaish,  Avigdor Abelson,  Baruch Rinkevich (2007)
Phenotypic plasticity enables multicellular organisms to adjust morphologies and various life history traits to variable environmental challenges. Here, we elucidate fixed and plastic architectural rules for colony astogeny in multiple types of colonial ramets, propagated by cutting from genets of the branching coral Stylophora pistillata from Eilat, the Red Sea. We examined 16 morphometric parameters on 136 one-year old S. pistillata colonies (of seven genotypes), originating from small fragments belonging, each, to one of three single-branch types (single tips, start-up, and advanced bifurcating tips) or to structural preparative manipulations (representing a single or two growth axes). Experiments were guided by the rationale that in colonial forms, complexity of evolving phenotypic plasticity can be associated with a degree of structural modularity, where shapes are approached by erecting iterative growth patterns at different levels of coral-colony organization. Analyses revealed plastic morphometric characters at branch level, and predetermined morphometric traits at colony level (only single trait exhibited plasticity under extreme manipulation state). Therefore, under the experimental manipulations of this study, phenotypic plasticity in S. pistillata appears to be related to branch level of organization, whereas colony traits are controlled by predetermined genetic architectural rules. Each level of organization undergoes its own mode of astogeny. However, depending on the original ramet structure, the spherical 3-D colonial architecture in this species is orchestrated and assembled by both developmental trajectories at the branch level, and traits at the colony level of organization. In nature, branching colonial forms are often subjected to harsh environmental conditions that cause fragmentation of colony into ramets of different sizes and structures. Developmental traits that are plastic, responding to fragment structure and are not predetermine in controlling astogeny, allow formation of species-specific architecture product through integrated but variable developmental routes. This adaptive plasticity or regeneration is an efficient mechanism by which isolated fragments of branching coral species cope with external environmental forces.

Morphological models of radiate accretive growth and the influence of hydrodynamics.

P. Sloot,  J. A. Kaandorp (2001)
In many marine sessile organisms (for example sponges and stony corals) the skeleton is formed by an accretive growth process, where layers of material are secreted on top of each other in a surface normal deposition process. In many of these organisms the growth process exhibits a strong morphological plasticity due to differences in exposure to water movement. In general, many of these organisms tend to form thin-branching growth forms under sheltered conditions, while the growth form gradually transforms into a more compact shape when the exposure of water movement increases. In this paper, we investigate this phenomenon by combining a three-dimensional simulation model of radiate accretive growth driven by the local availability of simulated food particles and a model, based on the lattice Boltzmann method, for simulating food particle distributions caused by a combination of flow and diffusion. In the simulations two different models of a suspension feeder with accretive growth were compared. In the first model, the deposition process is exclusively driven by the local availability of food particles, in the second model the deposition process was determined by the combination of local amount of contact to the environment and availability of food particles. In the simulations it was found that hydrodynamics has a strong impact on the overall morphologies which develop in the accretive growth process. In the model exclusively driven by the local availability of food particles, column-shaped objects emerged under diffusion conditions, while more spherical and lobed object were found for the flow-dominated case. In the simulations, the Péclet number was varied independently from the Reynolds number, which was kept at a relatively low constant value. In a range of increasing Péclet numbers, indicating an increasing influence of hydrodynamics, the simulated morphologies gradually transformed from thin-branching ones into more spherical and compact morphologies in the model where deposition was controlled by the local availability of food particles and the local amount of contact with the environment. Copyright 2001 Academic Press.

NC and CC were both funded by the Netherlands Organization for Scientific Research (Nederlandse Organisatie voor Wetenschappelijk Onderzoek, NWO). NC was funded by A visual Exploration Environment for Analyzing gene Regulation in Developmental processes (VEARD project # 643.100.601) and CC by the Computational Life Science Project (#635100024). The funders had no role in study design, data collection and analysis, decision to publish, or preparation of the manuscript.