The evolutionary significance of depression in Pathogen Host Defense (PATHOS-D) 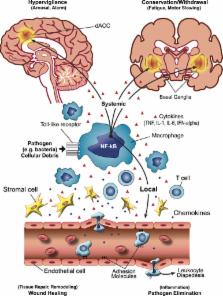 Given the manifold ways that depression impairs Darwinian fitness, the persistence in the human genome of risk alleles for the disorder remains a much debated mystery. Evolutionary theories that view depressive symptoms as adaptive fail to provide parsimonious explanations for why even mild depressive symptoms impair fitness-relevant social functioning, whereas theories that suggest that depression is maladaptive fail to account for the high prevalence of depression risk alleles in human populations. These limitations warrant novel explanations for the origin and persistence of depression risk alleles. Accordingly, studies on risk alleles for depression were identified using PubMed and Ovid MEDLINE to examine data supporting the hypothesis that risk alleles for depression originated and have been retained in the human genome because these alleles promote pathogen host defense, which includes an integrated suite of immunological and behavioral responses to infection. Depression risk alleles identified by both candidate gene and genome-wide association study (GWAS) methodologies were found to be regularly associated with immune responses to infection that were likely to enhance survival in the ancestral environment. Moreover, data support the role of specific depressive symptoms in pathogen host defense including hyperthermia, reduced bodily iron stores, conservation/withdrawal behavior, hypervigilance and anorexia. By shifting the adaptive context of depression risk alleles from relations with conspecifics to relations with the microbial world, the Pathogen Host Defense (PATHOS-D) hypothesis provides a novel explanation for how depression can be nonadaptive in the social realm, whereas its risk alleles are nonetheless represented at prevalence rates that bespeak an adaptive function.

Does rejection hurt? An FMRI study of social exclusion.

Naomi Eisenberger,  Tami Lieberman,  Joseph D. Williams (2003)
A neuroimaging study examined the neural correlates of social exclusion and tested the hypothesis that the brain bases of social pain are similar to those of physical pain. Participants were scanned while playing a virtual ball-tossing game in which they were ultimately excluded. Paralleling results from physical pain studies, the anterior cingulate cortex (ACC) was more active during exclusion than during inclusion and correlated positively with self-reported distress. Right ventral prefrontal cortex (RVPFC) was active during exclusion and correlated negatively with self-reported distress. ACC changes mediated the RVPFC-distress correlation, suggesting that RVPFC regulates the distress of social exclusion by disrupting ACC activity.

Effects of routine prophylactic supplementation with iron and folic acid on admission to hospital and mortality in preschool children in a high malaria transmission setting: community-based, randomised, placebo-controlled trial.

Sunil Sazawal,  Robert E Black,  Mahdi Ramsan … (2006)
Anaemia caused by iron deficiency is common in children younger than age 5 years in eastern Africa. However, there is concern that universal supplementation of children with iron and folic acid in areas of high malaria transmission might be harmful. We did a randomised, placebo-controlled trial, of children aged 1-35 months and living in Pemba, Zanzibar. We assigned children to daily oral supplementation with: iron (12.5 mg) and folic acid (50 mug; n=7950), iron, folic acid, and zinc (n=8120), or placebo (n=8006); children aged 1-11 months received half the dose. Our primary endpoints were all-cause mortality and admission to hospital. Analyses were by intention to treat. This study is registered as an International Standard Randomised Controlled Trial, number ISRCTN59549825. The iron and folic acid-containing groups of the trial were stopped early on Aug 19, 2003, on the recommendation of the data and safety monitoring board. To this date, 24 076 children contributed a follow-up of 25,524 child-years. Those who received iron and folic acid with or without zinc were 12% (95% CI 2-23, p=0.02) more likely to die or need treatment in hospital for an adverse event and 11% (1-23%, p=0.03) more likely to be admitted to hospital; there were also 15% (-7 to 41, p=0.19) more deaths in these groups. Routine supplementation with iron and folic acid in preschool children in a population with high rates of malaria can result in an increased risk of severe illness and death. In the presence of an active programme to detect and treat malaria and other infections, iron-deficient and anaemic children can benefit from supplementation. However, supplementation of those who are not iron deficient might be harmful. As such, current guidelines for universal supplementation with iron and folic acid should be revised.

Epidemiologic study of sleep disturbances and psychiatric disorders. An opportunity for prevention?

Julian Ford,  Douglas B Kamerow (1989)
As part of the National Institute of Mental Health Epidemiologic Catchment Area study, 7954 respondents were questioned at baseline and 1 year later about sleep complaints and psychiatric symptoms using the Diagnostic Interview Schedule. Of this community sample, 10.2% and 3.2% noted insomnia and hypersomnia, respectively, at the first interview. Forty percent of those with insomnia and 46.5% of those with hypersomnia had a psychiatric disorder compared with 16.4% of those with no sleep complaints. The risk of developing new major depression was much higher in those who had insomnia at both interviews compared with those without insomnia (odds ratio, 39.8; 95% confidence interval, 19.8 to 80.0). The risk of developing new major depression was much less for those who had insomnia that had resolved by the second visit (odds ratio, 1.6; 95% confidence interval, 0.5 to 5.3). Further research is needed to determine if early recognition and treatment of sleep disturbances can prevent future psychiatric disorders.