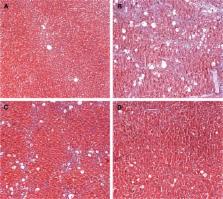 Liver fibrosis is the consequence of diverse liver injuries and can eventually develop into liver cirrhosis. Ginkgo biloba extract (GBE) is an extract from dried ginkgo leaves that has many pharmacological effects because of its various ingredients and has been shown to be hepatoprotective.

The results of hematoxylin and eosin staining, Masson’s trichrome staining, a liver function index, and a liver fibrosis index showed that GBE application noticeably mitigated fibrosis and improved the function of the liver. The western blotting and immunohistochemistry analyses indicated that GBE reduced liver fibrosis not only by inhibiting p38 MAPK and NF-κBp65 via inhibition of IκBα degradation but also by inhibiting hepatocyte apoptosis via downregulation of Bax, upregulation of Bcl-2, and subsequent inhibition of caspase-3 activation. Inflammation-associated factors and hepatic stellate cell (HSC)-activation markers further demonstrated that GBE could effectively inhibit HSC activation and inflammation as a result of its regulation of p38 MAPK and nuclear factor-kappa B/IκBα signaling.

Katherine Friedman (2008)
The study of hepatic fibrosis, or scarring in response to chronic liver injury, has witnessed tremendous progress in the past two decades. Clarification of the cellular sources of scar, and emergence of hepatic stellate cells not only as a fibrogenic cell type, but also as a critical immunomodulatory and homeostatic regulator are among the most salient advances. Activation of hepatic stellate cells remains a central event in fibrosis, complemented by evidence of additional sources of matrix-producing cells including bone marrow, portal fibroblasts, and epithelial-mesenchymal transition from both hepatocytes and cholangiocytes. A growing range of cytokines and their receptors and inflammatory cell subsets have further expanded our knowledge about this dynamic process. Collectively, these findings have laid the foundation for continued elucidation of underlying mechanisms, and more importantly for the implementation of rationally based approaches to limit fibrosis, accelerate repair and enhance liver regeneration in patients with chronic liver disease.

J Iredale,  Lyn Henderson (2007)
Liver fibrosis represents a major worldwide health care burden. The last 15 years have seen a rapid growth in our understanding of the pathogenesis of this clinically relevant model of inflammation and repair. This work is likely to inform the design of effective antifibrotic therapies in the near future. In this review, we examine how the innate and adaptive immune response interacts with other key cell types in the liver, such as the myofibroblast, regulating the process of hepatic fibrosis and, where relevant, resolution of fibrosis with remodelling. Emphasis is placed on the increasing knowledge that has been generated by the use of transgenic animals and animals in which specific cell lines have been deleted. Additionally, we review the increasing evidence that, although significant numbers of wound-healing myofibroblasts are derived from the hepatic stellate cell, significant contributions may occur from other cell lineages, including those from distant sites such as bone marrow stem cells.

Activation of hepatic stellate cells by TGF alpha and collagen type I is mediated by oxidative stress through c-myb expression.