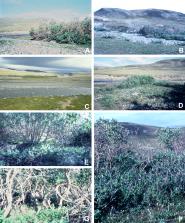 Victoria Island in Canada’s western Arctic is the eighth largest island in the world and the second largest in Canada. Here, we report the results of a floristic study of vascular plant diversity of Victoria Island. The study is based on a specimen-based dataset comprising 7031 unique collections from the island, including some 2870 new collections gathered between 2008 and 2019 by the authors and nearly 1000 specimens variously gathered by N. Polunin (in 1947), M. Oldenburg (1940s–1950s) and S. Edlund (1980s) that, until recently, were part of the unprocessed backlog of the National Herbarium of Canada and unavailable to researchers. Results are presented in an annotated checklist, including keys and distribution maps for all taxa, citation of specimens, comments on taxonomy, distribution and the history of documentation of taxa across the island, and photographs for a subset of taxa. The vascular plant flora of Victoria Island comprises 38 families, 108 genera, 272 species, and 17 additional taxa. Of the 289 taxa known on the island, 237 are recorded from the Northwest Territories portion of the island and 277 from the Nunavut part. Thirty-nine taxa are known on the island from a single collection, seven from two collections and three from three collections. Twenty-one taxa in eight families are newly recorded for the flora of Victoria Island: Artemisia tilesii , Senecio lugens , Taraxacum scopulorum ( Asteraceae ); Crucihimalaya bursifolia , Draba fladnizensis , D. juvenilis , D. pilosa , D. simmonsii ( Brassicaceae ); Carex bigelowii subsp. bigelowii , Eriophorum russeolum subsp. albidum ( Cyperaceae ); Anthoxanthum monticola subsp. monticola , Bromus pumpellianus , Deschampsia cespitosa subsp. cespitosa , D. sukatschewii , Festuca rubra subsp. rubra , Lolium perenne , Poa pratensis subsp. pratensis ( Poaceae ); Stuckenia filiformis ( Potamogetonaceae ); Potentilla × prostrata ( Rosaceae ); Galium aparine ( Rubiaceae ); and Salix ovalifolia var. ovalifolia ( Salicaceae ). Eight of these are new to the flora of the Canadian Arctic Archipelago: Senecio lugens , Draba juvenilis , D. pilosa , Anthoxanthum monticola subsp. monticola , Bromus pumpellianus , Deschampsia cespitosa subsp. cespitosa , Poa pratensis subsp. pratensis and Salix ovalifolia var. ovalifolia . One of these, Galium aparine , is newly recorded for the flora of Nunavut. Four first records for Victoria Island are introduced plants discovered in Cambridge Bay in 2017: three grasses ( Festuca rubra subsp. rubra , Lolium perenne , and Poa pratensis subsp. pratensis ) and Galium aparine . One taxon, Juncus arcticus subsp. arcticus , is newly recorded from the Northwest Territories. Of the general areas on Victoria Island that have been botanically explored the most, the greatest diversity of vascular plants is recorded in Ulukhaktok (194 taxa) and the next most diverse area is Cambridge Bay (183 taxa). The floristic data presented here represent a new baseline on which continued exploration of the vascular flora of Victoria Island – particularly the numerous areas of the island that remain unexplored or poorly explored botanically – will build.