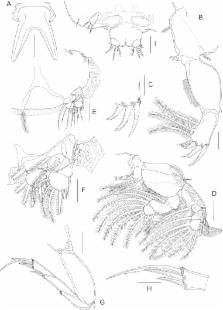 The developmental stages of the sea louse Lepeophtheirus elegans (Copepoda: Caligidae) are described from material collected from marine ranched Korean rockfish, Sebastes schlegelii. In L. elegans, setal number on the proximal segment of the antennule increases from 3 in the copepodid to 27 in the adult. Using the number of setae as a stage marker supports the inference that the post-naupliar phase of the life cycle comprises six stages: copepodid, chalimus I, chalimus II, pre-adult I, pre-adult II, and the adult. We observed variation in body length in both of the chalimus stages which we consider represents an early expression of sexual size dimorphism. We interpret the larger specimens of chalimus I as putative females, and the smaller as putative males; similarly with chalimus II, larger specimens are putative females and the smaller are males. Two patterns of life cycle are currently recognized within the Caligidae but the evidence presented here reconciles the two. We conclude that the typical caligid life cycle comprises only eight stages: two naupliar, one copepodid, and four chalimus stages preceding the adult in Caligus, but with the four chalimus stages represented by two chalimus and two pre-adult stages in Lepeophtheirus. This is a profound change with significant implications for the aquaculture industry, given that lice monitoring protocols include counts of chalimus stages and use temperature to predict when they will moult into the more pathogenic, mobile pre-adults. Lice management strategies must be tailored to the precise life cycle of the parasite.

Chalimus stages of Caligus latigenitalis (Copepoda:Caligidae) parasitic on blackhead seabream from Japanese waters, with discussion of terminology used for developmental stages of caligids.

Ione Madinabeitia,  Kazuya Nagasawa (2011)
The first and third chalimus stages and chalimus adult (previously known as young adult) of Caligus latigenitalis are described based on new material collected from the body surface of a heavily infected wild blackhead seabream Acanthopagrus schlegelii schlegelii from Hiroshima Bay, Japan. The second and fourth chalimus stages of the same species are redescribed. Adults of C. latigenitalis are characterized by possessing 2 stout marginally indented processes at the base of 2 terminal spines at distal exopodal segment of leg 4. The chalimi were identified to stage based on the structure of the frontal filament and the discrete ranges in body length. Sexual dimorphism is first observed at the third chalimus stage in the shape of the distal segment of the antenna. The total number of postnaupliar stages of C. latigenitalis is 6, including 4 semaphoronts, i.e., 1 copepodid stage consisting of 1 infective copepodid and the chalimus copepodid, 4 chalimus stages, and 1 adult stage with 1 chalimus adult and 1 mobile adult. New terminology for the developmental stages of caligid copepods is proposed herein by amending the definition of chalimus as the postnaupliar stages, as well as semaphoronts having a frontal filament for host attachment.

B.A. Venmathi Maran,  Sung-Yong Oh,  Ho Soh … (2012)
Caligid copepods (Crustacea) known as sea lice are pests of cultured fish, causing serious diseases and economic losses in fish aquaculture worldwide. One species, Caligus sclerotinosus Roubal, Armitage & Rohde, 1983 (Caligidae), is considered a serious pest of the highly prized red seabream Pagrus major (Temminck and Schlegel, 1843) (Sparidae) cultured in Japan. Recently, in neighboring Korea, red seabream culture has intensified and almost replaced yellow tail culture. However, until now, there have been no reports on infection of this sea louse from red seabream in Korea. We surveyed 120 (20 fish per month) P. major from a sea ranched Tongyeong Marine Research Center aquaculture facility, Gyeongsangnamdo, Korea for six months in 2011 (June to November). We recorded severe infection by the sea louse C. sclerotinosus on the skin of P. major. Prevalence was 100%, mean intensity 7.06, maximum intensity 49, and minimum intensity 2. Adult females (624), males (219) and few chalimi (5) were observed and identified by their morphology. As an average of all our collections, less than 0.6% of individuals were chalimi. We suggest, therefore, that adults of C. sclerotinosus undergo ontogenetic host switching after their final moult. No infection of C. sclerotinosus was found on wild P. major collected from Tongyeong and Yeosu fish markets on the southern coast of Korea. Severe infection by this sea louse may cause secondary infections of the host. This copepod is already reported from Australia and Japan and hence, this is the first report from Korea. We expect this pest to have an impact on Korean red seabream fisheries equally serious to that being experienced in Japan. Copyright © 2012 Elsevier B.V. All rights reserved.