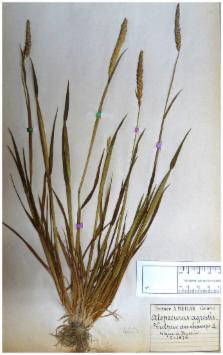 Acetyl-CoA carboxylase ( ACCase) alleles carrying one point mutation that confers resistance to herbicides have been identified in arable grass weed populations where resistance has evolved under the selective pressure of herbicides. In an effort to determine whether herbicide resistance evolves from newly arisen mutations or from standing genetic variation in weed populations, we used herbarium specimens of the grass weed Alopecurus myosuroides to seek mutant ACCase alleles carrying an isoleucine-to-leucine substitution at codon 1781 that endows herbicide resistance. These specimens had been collected between 1788 and 1975, i.e., prior to the commercial release of herbicides inhibiting ACCase. Among the 734 specimens investigated, 685 yielded DNA suitable for PCR. Genotyping the ACCase locus using the derived Cleaved Amplified Polymorphic Sequence (dCAPS) technique identified one heterozygous mutant specimen that had been collected in 1888. Occurrence of a mutant codon encoding a leucine residue at codon 1781 at the heterozygous state was confirmed in this specimen by sequencing, clearly demonstrating that resistance to herbicides can pre-date herbicides in weeds. We conclude that point mutations endowing resistance to herbicides without having associated deleterious pleiotropic effects can be present in weed populations as part of their standing genetic variation, in frequencies higher than the mutation frequency, thereby facilitating their subsequent selection by herbicide applications.

Michael Neff,  Emma J Chory,  Jessica Neff … (1998)
PCR-based detection of single nucleotide polymorphisms is a powerful tool for the plant geneticist. Cleaved amplified polymorphic sequence analysis is the most widely used approach for the detection of single nucleotide polymorphisms. However, this technique is limited to mutations which create or disrupt a restriction enzyme recognition site. This paper presents a modification of this technique where mismatches in a PCR primer are used to create a polymorphism based on the target mutation. This technique is useful for following known mutations in segregating populations and genetic mapping of isolated DNAs used for positional based cloning of new genes. In addition, a computer program has been developed that facilitates the design of these PCR primers.

Unravelling the genetic bases of non-target-site-based resistance (NTSR) to herbicides: a major challenge for weed science in the forthcoming decade.

Christophe Délye (2013)
Non-target-site-based resistance (NTSR) can confer unpredictable cross-resistance to herbicides. However, the genetic determinants of NTSR remain poorly known. The current, urgent challenge for weed scientists is thus to elucidate the bases of NTSR so that detection tools are developed, the evolution of NTSR is understood, the efficacy of the shrinking herbicide portfolio is maintained and integrated weed management strategies, including fully effective herbicide applications, are designed and implemented. In this paper, the importance of NTSR in resistance to herbicides is underlined. The most likely way in which NTSR evolves-by accumulation of different mechanisms within individual plants-is described. The NTSR mechanisms, which can interfere with herbicide penetration, translocation and accumulation at the target site, and/or protect the plant against the consequences of herbicide action, are then reviewed. NTSR is a part of the plant stress response. As such, NTSR is a dynamic process unrolling over time that involves 'protectors' directly interfering with herbicide action, and also regulators controlling 'protector' expression. NTSR is thus a quantitative trait. On this basis, a three-step procedure is proposed, based on the use of the 'omics' (genomics, transcriptomics, proteomics or metabolomics), to unravel the genetic bases of NTSR. Copyright © 2012 Society of Chemical Industry.

The authors are grateful to Bayer CropScience SA (Lyon, France) for supporting this work. The funder had no role in study design, data collection and analysis, decision to publish, or preparation of the manuscript. This does not alter the authors' adherence to all the PLOS ONE policies on sharing data and materials.