The Microcircuit Concept Applied to Cortical Evolution: from Three-Layer to Six-Layer Cortex 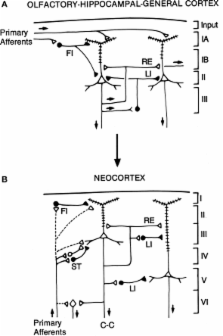 Understanding the principles of organization of the cerebral cortex requires insight into its evolutionary history. This has traditionally been the province of anatomists, but evidence regarding the microcircuit organization of different cortical areas is providing new approaches to this problem. Here we use the microcircuit concept to focus first on the principles of microcircuit organization of three-layer cortex in the olfactory cortex, hippocampus, and turtle general cortex, and compare it with six-layer neocortex. From this perspective it is possible to identify basic circuit elements for recurrent excitation and lateral inhibition that are common across all the cortical regions. Special properties of the apical dendrites of pyramidal cells are reviewed that reflect the specific adaptations that characterize the functional operations in the different regions. These principles of microcircuit function provide a new approach to understanding the expanded functional capabilities elaborated by the evolution of the neocortex.

Vladislav M. Sandler,  Benjamin J. Schiller,  Matthew E. Larkum … (2009)
Tuft dendrites are the main target for feedback inputs innervating neocortical layer 5 pyramidal neurons, but their properties remain obscure. We report the existence of N-methyl-D-aspartate (NMDA) spikes in the fine distal tuft dendrites that otherwise did not support the initiation of calcium spikes. Both direct measurements and computer simulations showed that NMDA spikes are the dominant mechanism by which distal synaptic input leads to firing of the neuron and provide the substrate for complex parallel processing of top-down input arriving at the tuft. These data lead to a new unifying view of integration in pyramidal neurons in which all fine dendrites, basal and tuft, integrate inputs locally through the recruitment of NMDA receptor channels relative to the fixed apical calcium and axosomatic sodium integration points.

Comparative electrophysiology of pyramidal and sparsely spiny stellate neurons of the neocortex.

B Connors,  Peter McCormick,  D McCormick … (1985)
Slices of sensorimotor and anterior cingulate cortex from guinea pigs were maintained in vitro and bathed in a normal physiological medium. Electrophysiological properties of neurons were assessed with intracellular recording techniques. Some neurons were identified morphologically by intracellular injection of the fluorescent dye Lucifer yellow CH. Three distinct neuronal classes of electrophysiological behavior were observed; these were termed regular spiking, bursting, and fast spiking. The physiological properties of neurons from sensorimotor and anterior cingulate areas did not differ significantly. Regular-spiking cells were characterized by action potentials with a mean duration of 0.80 ms at one-half amplitude, a ratio of maximum rate of spike rise to maximum rate of fall of 4.12, and a prominent afterhyperpolarization following a train of spikes. The primary slope of initial spike frequency versus injected current intensity was 241 Hz/nA. During prolonged suprathreshold current pulses the frequency of firing adapted strongly. When local synaptic pathways were activated, all cells were transiently excited and then strongly inhibited. Bursting cells were distinguished by their ability to generate endogenous, all-or-none bursts of three to five action potentials. Their properties were otherwise very similar to regular-spiking cells. The ability to generate a burst was eliminated when the membrane was depolarized to near the firing threshold with tonic current. By contrast, hyperpolarization of regular-spiking (i.e., nonbursting) cells did not uncover latent bursting tendencies. The action potentials of fast-spiking cells were much briefer (mean of 0.32 ms) than those of the other cell types.(ABSTRACT TRUNCATED AT 250 WORDS)