Trends in Roll-Your-Own Smoking: Findings from the ITC Four-Country Survey (2002–2008) 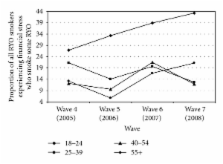 Objective. To establish the trends in prevalence, and correlates, of roll-your-own (RYO) use in Canada, USA, UK and Australia, 2002–2008. Methods. Participants were 19,456 cigarette smokers interviewed during the longitudinal International Tobacco Control (ITC) Four-Country Survey in Canada, USA, UK, and Australia. Results. “Predominant” RYO use (i.e., >50% of cigarettes smoked) increased significantly in the UK and USA as a proportion of all cigarette use (both P < .001) and in all countries as a proportion of any RYO use (all P < .010). Younger, financially stressed smokers are disproportionately contributing to “some” use (i.e., ≤50% of cigarettes smoked). Relative cost was the major reason given for using RYO, and predominant RYO use is consistently and significantly associated with low income. Conclusions. RYO market trends reflect the price advantages accruing to RYO (a product of favourable taxation regimes in some jurisdictions reinforced by the enhanced control over the amount of tobacco used), especially following the impact of the Global Financial Crisis; the availability of competing low-cost alternatives to RYO; accessibility of duty-free RYO tobacco; and tobacco industry niche marketing strategies. If policy makers want to ensure that the RYO option does not inhibit the fight to end the tobacco epidemic, especially amongst the disadvantaged, they need to reduce the price advantage, target additional health messages at (young) RYO users, and challenge niche marketing of RYO by the industry.

Measuring the heaviness of smoking: using self-reported time to the first cigarette of the day and number of cigarettes smoked per day.

Todd F Heatherton,  R Frecker,  Keith W Rickert … (1989)
Two simple self-report measures have been used to assess the heaviness of smoking, 'number of cigarettes per day' (CPD) and 'time to the first cigarette of the day' (TTF). Little attention, however, has been given to the precise method of scoring this information. Using biochemical indicators of heaviness of smoking (alveolar carbon monoxide and cotinine), we explore the optimum data transformations for regression analysis and categorical analysis. We suggest a four category scoring scheme for both time to the first cigarette of the day (less than or equal to 5, 6-30, 31-60 and 61+ min) and average daily consumption of cigarettes (1-10, 11-20, 21-30, 31+ cigarettes) as the most powerful and practical categorical scoring of these variables. Due to possible ceiling effects on biochemical measures, we suggest using logarithmic transformations of CPD or TTF for regression or correlation analyses.

Catherine A. Hyland,  K. Cummings,  C Boudreau … (2006)
This paper outlines the design features, data collection methods and analytic strategies of the International Tobacco Control (ITC) Four Country Survey, a prospective study of more than 2000 longitudinal respondents per country with yearly replenishments. This survey possesses unique features that sets it apart among surveys on tobacco use and cessation. One of these features is the use of theory-driven conceptual models. In this paper, however, the focus is on the two key statistical features of the survey: longitudinal and "quasi-experimental" designs. Although it is often possible to address the same scientific questions with a cross-sectional or a longitudinal study, the latter has the major advantage of being able to distinguish changes over time within individuals from differences among people at baseline (that is, differences between age and cohort effects). Furthermore, quasi-experiments, where countries not implementing a given new tobacco control policy act as the control group to which the country implementing such a policy will be compared, provide much stronger evidence than observational studies on the effects of national-level tobacco control policies. In summary, application of rigorous research methods enables this survey to be a rich data resource, not only to evaluate policies, but also to gain new insights into the natural history of smoking cessation, through longitudinal analyses of smoker behaviour.