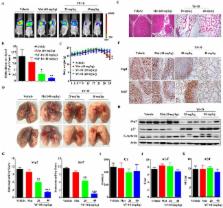 Lung cancer is the leading cause of cancer related death which needs novel drugs to improve patient outcomes. In this study, we examined the ability of YF-18, a novel matrine derivative to inhibit the growth and migration of lung cancer cells. By cell cycle analysis, wound healing and transwell assays, we found that YF-18 induced G2/M cell cycle arrest and inhibited migration of lung cancer cells in a dose-dependent manner. Further results indicated that YF-18 inhibited cell proliferation and migration through down-regulating Skp2 and up-regulating its substrates, p27 and E-cadherin. Moreover, YF-18 inhibited A549-luciferase cell xenograft tumor growth in a dose-dependent manner. The findings indicate that YF-18 bears therapeutic potentials for lung cancer.

p27(Kip1) ubiquitination and degradation is regulated by the SCF(Skp2) complex through phosphorylated Thr187 in p27.

Lyuben Tsvetkov, Kun-Huei Yeh, Soo-Jung Lee … (1999)
Many tumorigenic processes affect cell-cycle progression by their effects on the levels of the cyclin-dependent kinase inhibitor p27(Kip1) [1,2]. The phosphorylation- and ubiquitination-dependent proteolysis of p27 is implicated in control of the G1-S transition in the cell cycle [3-6]. To determine the factors that control p27 stability, we established a cell-free extract assay that recapitulates the degradation of p27. Phosphorylation of p27 at Thr187 was essential for its degradation. Degradation was also dependent on SCF(Skp2), a protein complex implicated in targeting phosphorylated proteins for ubiquitination [7-10]. Immunodepletion of components of the complex - Cul-1, Skp1, or Skp2 - from the extract abolished p27 degradation, while addition of purified SCF(Skp2) to Skp2- depleted extract restored the capacity to degrade p27. A specific association was observed between Skp2 and a p27 carboxy-terminal peptide containing phosphorylated Thr187, but not between Skp2 and the non-phosphorylated peptide. Skp2-dependent associations between Skp1 or Cul-1 and the p27 phosphopeptide were also detected. Isolated SCF(Skp2) contained an E3 ubiquitin ligase activity towards p27. Our data thus suggest that SCF(Skp2) specifically targets p27 for degradation during cell-cycle progression.

Ainara Egia, K. S. Nakayama, Guocan Wang … (2010)
Cellular senescence has been recently shown to have an important role in opposing tumour initiation and promotion. Senescence induced by oncogenes or by loss of tumour suppressor genes is thought to critically depend on induction of the p19(Arf)-p53 pathway. The Skp2 E3-ubiquitin ligase can act as a proto-oncogene and its aberrant overexpression is frequently observed in human cancers. Here we show that although Skp2 inactivation on its own does not induce cellular senescence, aberrant proto-oncogenic signals as well as inactivation of tumour suppressor genes do trigger a potent, tumour-suppressive senescence response in mice and cells devoid of Skp2. Notably, Skp2 inactivation and oncogenic-stress-driven senescence neither elicit activation of the p19(Arf)-p53 pathway nor DNA damage, but instead depend on Atf4, p27 and p21. We further demonstrate that genetic Skp2 inactivation evokes cellular senescence even in oncogenic conditions in which the p19(Arf)-p53 response is impaired, whereas a Skp2-SCF complex inhibitor can trigger cellular senescence in p53/Pten-deficient cells and tumour regression in preclinical studies. Our findings therefore provide proof-of-principle evidence that pharmacological inhibition of Skp2 may represent a general approach for cancer prevention and therapy.

Qing Chen, Weilin Xie, Deborah Kuhn … (2008)
Decreased p27(Kip1) levels are a poor prognostic factor in many malignancies, and can occur through up-regulation of SCF(Skp2) E3 ligase function, resulting in enhanced p27 ubiquitination and proteasome-mediated degradation. While proteasome inhibitors stabilize p27(Kip1), agents inhibiting SCF(Skp2) may represent more directly targeted drugs with the promise of enhanced efficacy and reduced toxicity. Using high-throughput screening, we identified Compound A (CpdA), which interfered with SCF(Skp2) ligase function in vitro, and induced specific accumulation of p21 and other SCF(Skp2) substrates in cells without activating a heat-shock protein response. CpdA prevented incorporation of Skp2 into the SCF(Skp2) ligase, and induced G(1)/S cell-cycle arrest as well as SCF(Skp2)- and p27-dependent cell killing. This programmed cell death was caspase-independent, and instead occurred through activation of autophagy. In models of multiple myeloma, CpdA overcame resistance to dexamethasone, doxorubicin, and melphalan, as well as to bortezomib, and also acted synergistically with this proteasome inhibitor. Importantly, CpdA was active against patient-derived plasma cells and both myeloid and lymphoblastoid leukemia blasts, and showed preferential activity against neoplastic cells while relatively sparing other marrow components. These findings provide a rational framework for further development of SCF(Skp2) inhibitors as a novel class of antitumor agents.