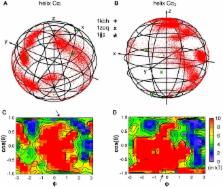 To understand the interplay of residual structures and conformational fluctuations in the interaction of intrinsically disordered proteins (IDPs), we first combined implicit solvent and replica exchange sampling to calculate atomistic disordered ensembles of the nuclear co-activator binding domain (NCBD) of transcription coactivator CBP and the activation domain of the p160 steroid receptor coactivator ACTR. The calculated ensembles are in quantitative agreement with NMR-derived residue helicity and recapitulate the experimental observation that, while free ACTR largely lacks residual secondary structures, free NCBD is a molten globule with a helical content similar to that in the folded complex. Detailed conformational analysis reveals that free NCBD has an inherent ability to substantially sample all the helix configurations that have been previously observed either unbound or in complexes. Intriguingly, further high-temperature unbinding and unfolding simulations in implicit and explicit solvents emphasize the importance of conformational fluctuations in synergistic folding of NCBD with ACTR. A balance between preformed elements and conformational fluctuations appears necessary to allow NCBD to interact with different targets and fold into alternative conformations. Together with previous topology-based modeling and existing experimental data, the current simulations strongly support an “extended conformational selection” synergistic folding mechanism that involves a key intermediate state stabilized by interaction between the C-terminal helices of NCBD and ACTR. In addition, the atomistic simulations reveal the role of long-range as well as short-range electrostatic interactions in cooperating with readily fluctuating residual structures, which might enhance the encounter rate and promote efficient folding upon encounter for facile binding and folding interactions of IDPs. Thus, the current study not only provides a consistent mechanistic understanding of the NCBD/ACTR interaction, but also helps establish a multi-scale molecular modeling framework for understanding the structure, interaction, and regulation of IDPs in general.

Intrinsically disordered proteins (IDPs) are now widely recognized to play fundamental roles in biology and to be frequently associated with human diseases. Although the potential advantages of intrinsic disorder in cellular signaling and regulation have been widely discussed, the physical basis for these proposed phenomena remains sketchy at best. An integration of multi-scale molecular modeling and experimental characterization is necessary to uncover the molecular principles that govern the structure, interaction, and regulation of IDPs. In this work, we characterize the conformational properties of two IDPs involved in transcription regulation at the atomistic level and further examine the roles of these properties in their coupled binding and folding interactions. Our simulations suggest interplay among residual structures, conformational fluctuations, and electrostatic interactions that allows efficient synergistic folding of these two IDPs. In particular, we propose that electrostatic interactions might play an important role in facilitating rapid folding and binding recognition of IDPs, by enhancing the encounter rate and promoting efficient folding upon encounter.

C Dobson (2003)
The manner in which a newly synthesized chain of amino acids transforms itself into a perfectly folded protein depends both on the intrinsic properties of the amino-acid sequence and on multiple contributing influences from the crowded cellular milieu. Folding and unfolding are crucial ways of regulating biological activity and targeting proteins to different cellular locations. Aggregation of misfolded proteins that escape the cellular quality-control mechanisms is a common feature of a wide range of highly debilitating and increasingly prevalent diseases.

Peter E. Wright,  H.Jane Dyson (1999)
A major challenge in the post-genome era will be determination of the functions of the encoded protein sequences. Since it is generally assumed that the function of a protein is closely linked to its three-dimensional structure, prediction or experimental determination of the library of protein structures is a matter of high priority. However, a large proportion of gene sequences appear to code not for folded, globular proteins, but for long stretches of amino acids that are likely to be either unfolded in solution or adopt non-globular structures of unknown conformation. Characterization of the conformational propensities and function of the non-globular protein sequences represents a major challenge. The high proportion of these sequences in the genomes of all organisms studied to date argues for important, as yet unknown functions, since there could be no other reason for their persistence throughout evolution. Clearly the assumption that a folded three-dimensional structure is necessary for function needs to be re-examined. Although the functions of many proteins are directly related to their three-dimensional structures, numerous proteins that lack intrinsic globular structure under physiological conditions have now been recognized. Such proteins are frequently involved in some of the most important regulatory functions in the cell, and the lack of intrinsic structure in many cases is relieved when the protein binds to its target molecule. The intrinsic lack of structure can confer functional advantages on a protein, including the ability to bind to several different targets. It also allows precise control over the thermodynamics of the binding process and provides a simple mechanism for inducibility by phosphorylation or through interaction with other components of the cellular machinery. Numerous examples of domains that are unstructured in solution but which become structured upon binding to the target have been noted in the areas of cell cycle control and both transcriptional and translational regulation, and unstructured domains are present in proteins that are targeted for rapid destruction. Since such proteins participate in critical cellular control mechanisms, it appears likely that their rapid turnover, aided by their unstructured nature in the unbound state, provides a level of control that allows rapid and accurate responses of the cell to changing environmental conditions. Copyright 1999 Academic Press.

Pedro Romero,  Vladimir Uversky,  Marc S. Cortese … (2005)
Proteins participate in complex sets of interactions that represent the mechanistic foundation for much of the physiology and function of the cell. These protein-protein interactions are organized into exquisitely complex networks. The architecture of protein-protein interaction networks was recently proposed to be scale-free, with most of the proteins having only one or two connections but with relatively fewer 'hubs' possessing tens, hundreds or more links. The high level of hub connectivity must somehow be reflected in protein structure. What structural quality of hub proteins enables them to interact with large numbers of diverse targets? One possibility would be to employ binding regions that have the ability to bind multiple, structurally diverse partners. This trait can be imparted by the incorporation of intrinsic disorder in one or both partners. To illustrate the value of such contributions, this review examines the roles of intrinsic disorder in protein network architecture. We show that there are three general ways that intrinsic disorder can contribute: First, intrinsic disorder can serve as the structural basis for hub protein promiscuity; secondly, intrinsically disordered proteins can bind to structured hub proteins; and thirdly, intrinsic disorder can provide flexible linkers between functional domains with the linkers enabling mechanisms that facilitate binding diversity. An important research direction will be to determine what fraction of protein-protein interaction in regulatory networks relies on intrinsic disorder.

Publisher ID: PCOMPBIOL-D-11-01388
DOI: 10.1371/journal.pcbi.1002353
PMC ID: 3257294
PubMed ID: 22253588
Copyright statement: Zhang et al. This is an open-access article distributed under the terms of the Creative Commons Attribution License, which permits unrestricted use, distribution, and reproduction in any medium, provided the original author and source are credited.