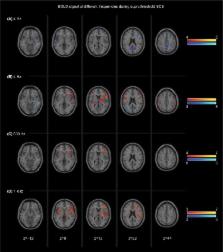 Failed back surgery syndrome (FBSS) is a common and devastating chronic neuropathic pain disorder. Conventional spinal cord stimulation (SCS) applies electrical suprathreshold pulses to the spinal cord at a frequency of 40–60 Hz and relieves pain in FBSS patients. During the last decade, two major changes have emerged in the techniques of stimulating the spinal cord: paresthesia-free or subthreshold stimulation and administration of higher frequency or higher amounts of energy to the spinal cord. Despite the positive clinical results, the mechanism of action remains unclear. A functional MRI (fMRI) study was conducted to investigate the brain alterations during subthreshold and suprathreshold stimulation at different frequencies.