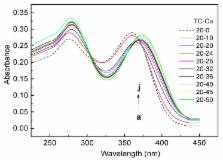 Performance of activated carbon and bentonite for adsorption of amoxicillin from wastewater: mechanisms, isotherms and kinetics.

Eric Putra,  Ramon Pranowo,  Jaka Sunarso … (2009)
Amoxicillin's traces within pharmaceutical effluents have toxic impact toward the algae and other lower organisms within food web. Adsorption, as an efficient process to remove contaminants from water was chosen; in particular with bentonite and activated carbon as adsorbents. The study was carried out at several pH values. Langmuir and Freundlich models were then employed to correlate the equilibria data on which both models equally well-fit the data. For kinetic data, pseudo-first and second order models are selected. While chemisorption is the dominant adsorption mechanism on the bentonite case, both physisorption and chemisorption play important roles for adsorption onto activated carbon. Also, several possible mechanisms for these adsorption systems were elaborated further.

Effects of sulfonamide and tetracycline antibiotics on soil microbial activity and microbial biomass.

Sören Bruhn,  I Beck-Speier (2005)
Increasingly often soil residual concentrations of pharmaceutical antibiotics are detected, while their ecotoxic relevance is scarcely known. Thus, dose related effects of two antibiotics, sulfapyridine and oxytetracycline, on microorganisms of two different topsoils were investigated. The fumigation-extracted microbial C (E(C)) and ergosterol were determined to indicate soil microbial and fungal biomass, respectively. Microbial activity was tested as basal respiration (BR), dehydrogenase activity (DHA), substrate-induced respiration (SIR), and Fe(III) reduction. The BR and DHA were uninfluenced even at antibiotic concentrations of 1000 microg g(-1). This revealed that an activation of microbial growth through nutrient substrate addition is required to test possible effects of the bacteriostatic antibiotics. In addition, the effects of both antibiotics were time dependent, showing that short-term tests were not suitable. Clear dose-response relations were determined with SIR when the short-term incubation of 4h was extended into the growth phase of the microorganisms (24 and 48 h). The Fe(III) reduction test, with a 7-d incubation, was also found to be suitable for toxicity testing of antibiotics in soils. Effective doses inhibiting the microbial activity by 10% (ED(10)) ranged from total antibiotic concentrations of 0.003-7.35 microg g(-1), depending on the antibiotic compound and its soil adsorption. Effective solution concentrations (EC(10)), calculated from distribution coefficients, ranged from 0.2 to 160 ng g(-1). The antibiotics significantly (p<0.05) reduced numbers of soil bacteria, resulting in dose related shifts in the fungal:bacterial ratio, which increased during 14 d, as determined from analysis of ergosterol and E(C). It was concluded that pharmaceutical antibiotics can exert a temporary selective pressure on soil microorganisms even at environmentally relevant concentrations.

These authors contributed equally to this paper.