Tonantzin, a New Genus of Bess Beetle (Coleoptera, Passalidae) from a Montane Subtropical Forest in Central Mexico, with a Review of the Taxonomic Significance of the Mesofrontal Structure in Proculini 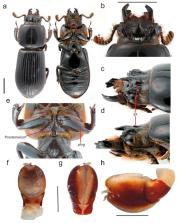 Mexico has the third highest diversity of passalid beetles in the World. Here we describe Tonantzin new genus, a new monotypic genus, potentially endemic to the mountains of central Mexico. The new genus is diagnosed by a new configuration of characters from the mesofrontal structure (MFS) in addition to other characters. The MFS in Passalidae has been treated either as a composite complex character or a combination of individual characters. Using a broad taxonomic sample within Proculini, we discuss the taxonomic and systematic implications of the MFS for the tribe. We define the MFS type tepetl. Given the importance of the MFS for passalid taxonomy we propose a new delimitation of the structure using boundaries based on internal and external head structures. We argue that the treatment of the MFS as a complex character better captures the nature of this structure but we ultimately find a need to standardize the way in which this structure is described in the taxonomic literature and used in phylogenetic analyses.

On the failure of modern species concepts.

Jody Hey (2006)
The modern age of species concepts began in 1942, when Ernst Mayr gave concept names to several different approaches to species identification. A long list of species concepts then followed, as well as a complex literature on their merits, motivations and uses. Some of these complexities arose as a consequence of the semantic shift that Mayr introduced, in which procedures for identifying species were elevated to concepts. Much of the debate in recent decades over concepts, and over pluralism versus monism, can be seen as an unnecessary consequence of treating species identification criteria as if they were more fundamental concepts. Recently, biologists have begun to recognize both the shortcomings of a lexicon of multiple species concepts and a common evolutionary idea that underlies them.

David R. Maddison,  Alexander Wild (2008)
Although nuclear protein-coding genes have proven broadly useful for phylogenetic inference, relatively few such genes are regularly employed in studies of Coleoptera, the most diverse insect order. We increase the number of loci available for beetle systematics by developing protocols for three genes previously unused in beetles (alpha-spectrin, RNA polymerase II and topoisomerase I) and by refining protocols for five genes already in use (arginine kinase, CAD, enolase, PEPCK and wingless). We evaluate the phylogenetic performance of each gene in a Bayesian framework against a presumably known test phylogeny. The test phylogeny covers 31 beetle specimens and two outgroup taxa of varying age, including three of the four extant beetle suborders and a denser sampling in Adephaga and in the carabid genus Bembidion. All eight genes perform well for Cenozoic divergences and accurately separate closely related species within Bembidion, but individual genes differ markedly in accuracy over the older Mesozoic and Permian divergences. The concatenated data reconstruct the test phylogeny with high support in both Bayesian and parsimony analyses, indicating that combining data from multiple nuclear loci will be a fruitful approach for assembling the beetle tree of life.