Beyond FEV 1 in COPD: a review of patient-reported outcomes and their measurement 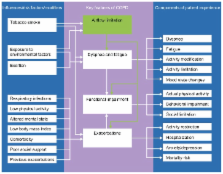 Patients with chronic obstructive pulmonary disease (COPD) present with a variety of symptoms and pathological consequences. Although primarily viewed as a respiratory disease, COPD has both pulmonary and extrapulmonary effects, which have an impact on many aspects of physical, emotional, and mental well-being. Traditional assessment of COPD relies heavily on measuring lung function, specifically forced expiratory volume in 1 second (FEV 1). However, the evidence suggests that FEV 1 is a relatively poor correlate of symptoms such as breathlessness and the impact of COPD on daily life. Furthermore, many consequences of the disease, including anxiety and depression and the ability to perform daily activities, can only be described and reported reliably by the patient. Thus, in order to provide a comprehensive view of the effects of interventions in clinical trials, it is essential that spirometry is accompanied by assessments using patient-reported outcome (PRO) instruments. We provide an overview of patient-reported outcome concepts in COPD, such as breathlessness, physical functioning, and health status, and evaluate the tools used for measuring these concepts. Particular attention is given to the newly developed instruments emerging in response to recent regulatory guidelines for the development and use of PROs in clinical trials. We conclude that although data from the development and validation of these new PRO instruments are emerging, to build the body of evidence that supports the use of a new instrument takes many years. Furthermore, new instruments do not necessarily have better discriminative or evaluative properties than older instruments. The development of new PRO tools, however, is crucial, not only to ensure that key COPD concepts are being reliably measured but also that the relevant treatment effects are being captured in clinical trials. In turn, this will help us to understand better the patient’s experience of the disease.

Validity and responsiveness of the self-administered computerized versions of the baseline and transition dyspnea indexes.

Donald Mahler,  Laurie A Waterman,  Joseph Ward … (2007)
Numerous instruments have been developed to examine the impact of activities on breathlessness. The primary purpose of this study was to examine the validity and responsiveness of the self-administered computerized (SAC) versions of the multidimensional baseline dyspnea index (BDI) and the transition dyspnea index (TDI). Sixty-five patients with COPD who complained of exertional breathlessness were evaluated at an initial visit and after receiving standard therapy at two academic medical centers. Dyspnea scores from the SAC versions were compared with those obtained with the Medical Research Council (MRC) scale and with the original interview versions of the BDI and TDI. At the initial visit, all three dyspnea instruments showed similar correlations among themselves and with lung function. At the follow-up visit (mean [+/- SD] time after initial visit, 48 +/- 16 days), breathlessness scores were improved on all three instruments. Correlations were consistently higher for both versions of the TDI, and changes in lung function compared with corresponding values for DeltaMRC scale. Although 55% of patients reported no change in breathlessness on the MRC scale following treatment, the mean SAC and interview TDI scores were increased by 1.0 +/- 2.4 and 1.4 +/- 2.5, respectively, in these same patients. Both versions of the BDI and the MRC scale showed concurrent validity at the initial visit. The SAC TDI demonstrated responsiveness to standard therapy that was comparable with the findings of the interview TDI, but was better than that recorded with the MRC scale. The advantages of the SAC TDI include a patient-reported score on a continuous scale using computer technology.

Nadia Yousaf,  Kai K Lee,  Bhagyashree Jayaraman … (2011)
Introduction Acute cough has a significant impact on physical and psychosocial health and is associated with an impaired quality of life (QOL). The Leicester Cough Questionnaire (LCQ) is a validated cough-related health status questionnaire designed for patients with chronic cough. The purpose of this study was to validate the LCQ for the assessment of health related QOL in patients with acute cough and determine the clinical minimal important difference (MID). Methods 10 subjects with cough due to acute upper respiratory tract infection underwent focused interviews to investigate the face validity of the LCQ. The LCQ was also evaluated by a multidisciplinary team. 30 subjects completed the revised LCQ-acute and a cough visual analogue score (VAS: 0-100 mm) within one week of onset of cough and again 0.9. There was a significant correlation between LCQ-acute and VAS (ρ = -0.48, p = 0.007). The LCQ-acute and its domains were highly responsive to change; effect sizes 1.7-2.3. The MID for total LCQ and VAS were 2.5 and 13 mm respectively. Conclusion The LCQ-acute is a brief, simple and valid instrument to assess cough specific health related QOL in patients with acute cough. It is a highly responsive tool suggesting that it will be particularly useful to assess the effect of antitussive therapy.

Course of normal and abnormal fatigue in patients with chronic obstructive pulmonary disease, and its relationship with domains of health status.

Jeannette B Peters,  Yvonne F Heijdra,  Leonie Daudey … (2011)
To examine the difference between patients with normal and patients with abnormal fatigue on aspects of health status, and investigate the natural course of fatigue in patients with Chronic Obstructive Pulmonary Disease (COPD).