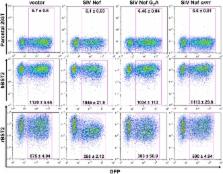 Tetherin, also known as BST2, CD317 or HM1.24, was recently identified as an interferon-inducible host–cell factor that interferes with the detachment of virus particles from infected cells. HIV-1 overcomes this restriction by expressing an accessory protein, Vpu, which counteracts tetherin. Since lentiviruses of the SIV smm/mac/HIV-2 lineage do not have a vpu gene, this activity has likely been assumed by other viral gene products. We found that deletion of the SIV mac239 nef gene significantly impaired virus release in cells expressing rhesus macaque tetherin. Virus release could be restored by expressing Nef in trans. However, Nef was unable to facilitate virus release in the presence of human tetherin. Conversely, Vpu enhanced virus release in the presence of human tetherin, but not in the presence of rhesus tetherin. In accordance with the species-specificity of Nef in mediating virus release, SIV Nef downregulated cell-surface expression of rhesus tetherin, but did not downregulate human tetherin. The specificity of SIV Nef for rhesus tetherin mapped to four amino acids in the cytoplasmic domain of the molecule that are missing from human tetherin, whereas the specificity of Vpu for human tetherin mapped to amino acid differences in the transmembrane domain. Nef alleles of SIV smm, HIV-2 and HIV-1 were also able to rescue virus release in the presence of both rhesus macaque and sooty mangabey tetherin, but were generally ineffective against human tetherin. Thus, the ability of Nef to antagonize tetherin from these Old World primates appears to be conserved among the primate lentiviruses. These results identify Nef as the viral gene product of SIV that opposes restriction by tetherin in rhesus macaques and sooty mangabeys, and reveal species-specificity in the activities of both Nef and Vpu in overcoming tetherin in their respective hosts.

Tetherin was recently identified as a host–cell factor that interferes with the detachment of virus particles from infected cells. HIV-1 overcomes the antiviral effects of tetherin by expressing Vpu, which mediates the degradation of tetherin. While tetherin has broad activity against diverse types of viruses, only a few of the primate AIDS viruses express Vpu. Simian immunodeficiency virus (SIV) does not have a vpu gene. Since SIV infection of the rhesus macaque is an important animal model for AIDS vaccine development, we set out to determine how SIV overcomes restriction by tetherin in this species. We found that the SIV Nef protein could counteract rhesus macaque tetherin, but not human tetherin. Conversely, the HIV-1 Vpu protein counteracted human tetherin, but not rhesus tetherin. The specificity of Nef for rhesus tetherin mapped to four amino acids in the cytoplasmic domain of the molecule that are missing from human tetherin, whereas the specificity of Vpu for human tetherin mapped to amino acid differences in the transmembrane domain. These observations identify a role for the SIV Nef protein in counteracting tetherin, and reveal species-specificity in the activities of both Nef and Vpu in overcoming tetherin in their respective hosts.

Tetherin inhibits retrovirus release and is antagonized by HIV-1 Vpu.

Trinity Zang,  Stuart J D Neil,  Paul D. Bieniasz (2008)
Human cells possess an antiviral activity that inhibits the release of retrovirus particles, and other enveloped virus particles, and is antagonized by the HIV-1 accessory protein, Vpu. This antiviral activity can be constitutively expressed or induced by interferon-alpha, and it consists of protein-based tethers, which we term 'tetherins', that cause retention of fully formed virions on infected cell surfaces. Using deductive constraints and gene expression analyses, we identify CD317 (also called BST2 or HM1.24), a membrane protein of previously unknown function, as a tetherin. Specifically, CD317 expression correlated with, and induced, a requirement for Vpu during HIV-1 and murine leukaemia virus particle release. Furthermore, in cells where HIV-1 virion release requires Vpu expression, depletion of CD317 abolished this requirement. CD317 caused retention of virions on cell surfaces and, after endocytosis, in CD317-positive compartments. Vpu co-localized with CD317 and inhibited these effects. Inhibition of Vpu function and consequent mobilization of tetherin's antiviral activity is a potential therapeutic strategy in HIV/AIDS.

Importance of the nef gene for maintenance of high virus loads and for development of AIDS.

Harry W. Kestier,  Douglas Ringler,  Kazuyasu Mori … (1991)
When rhesus monkeys were infected with a form of cloned SIVmac239 having a premature stop signal at the 93rd codon of nef, revertants with a coding codon at this position quickly and universally came to predominate in the infected animals. This suggests that there are strong selective forces for open functional forms of nef in vivo. Although deletion of nef sequences had no detectable effect on virus replication in cultured cells, deletion of nef sequences dramatically altered the properties of virus in infected rhesus monkeys. Our results indicate that nef is required for maintaining high virus loads during the course of persistent infection in vivo and for full pathologic potential. Thus, nef should become a target for antiviral drug development. Furthermore, the properties of virus with a deletion in nef suggest a means for making live-attenuated strains of virus for experimental vaccine testing.

Bst-2/HM1.24 is a raft-associated apical membrane protein with an unusual topology.

Ruth Rollason,  George Banting,  Sabine Kupzig … (2003)
An expression screen of a rat cDNA library for sequences encoding Golgi-localized integral membrane proteins identified a protein with an apparent novel topology, i.e. with both an N-terminal transmembrane domain and a C-terminal glycosyl-phosphatidylinositol (GPI) anchor. Our data are consistent with this. Thus, the protein would have a topology that, in mammalian cells, is shared only by a minor, but pathologically important, topological isoform of the prion protein (PrP). The human orthologue of this protein has been described previously (BST-2 or HM1.24 antigen) as a cell surface molecule that appears to be involved in early pre-B-cell development and which is present at elevated levels at the surface of myeloma cells. We show that rat BST-2/HM1.24 has both a cell surface and an intracellular (juxtanuclear) location and is efficiently internalized from the cell surface. We also show that the cell surface pool of BST-2/HM1.24 is predominantly present in the apical plasma membrane of polarized cells. The fact that rat BST-2/HM1.24 apparently possesses a GPI anchor led us to speculate that it might exist in cholesterol-rich lipid microdomains (lipid rafts) at the plasma membrane. Data from several experiments are consistent with this localization. We present a model in which BST-2/HM1.24 serves to link adjacent lipid rafts within the plasma membrane.

Publisher ID: 09-PLPA-RA-0092R2
DOI: 10.1371/journal.ppat.1000429
PMC ID: 2673686
PubMed ID: 19436700
Copyright statement: Jia et al. This is an open-access article distributed under the terms of the Creative Commons Attribution License, which permits unrestricted use, distribution, and reproduction in any medium, provided the original author and source are credited.