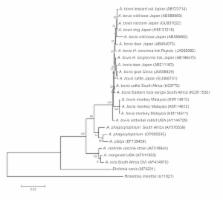 ScienceOpenPublisherPMC
Bookmark
There is no author summary for this article yet. Authors can add summaries to their articles on ScienceOpen to make them more accessible to a non-specialist audience.
To the Editor: The cynomolgus monkey (Macaca fascicularis), also known as the long-tailed macaque or crab-eating monkey, is commonly found in the Southeast Asia region ( 1 ). The macaque has been associated with several bacterial infections, such as those caused by hemotropic Mycoplasma and Bartonella quintana ( 2 ). As a result of rapid deforestation and changes in land use patterns, cynomolgus monkeys live in close proximity to human-populated areas ( 1 ). Human–macaque conflict may increase the risk for zoonoses. Little is known about rickettsial and anaplasma infections in cynomolgus monkeys in Malaysia. Although Rickettsia spp. RF2125 and Rf31 have been identified from cat fleas in Malaysia ( 3 ), the presence of Anaplasma bovis in monkeys is not known. Rickettsia felis, a member of the spotted fever group rickettsiae, is an emergent fleaborne human pathogen distributed worldwide ( 4 ). The obligate intracellular bacterium has been identified from cats, dogs, opossums, and the ectoparasites of various mammalian hosts. Several uncultured rickettsiae genetically closely related to the R. felis–type strain URRWXCal2 (referred to as R. felis–like organisms and including Rickettsia spp. RF2125, Rf31, Candidatus Rickettsia asemboensis, and others) have also been identified from various arthropods and fecal samples of primates ( 5 ). A. bovis is a gram-negative, pleomorphic, tickborne intracellular bacterium that infects a wide range of mammal species in many geographic regions ( 6 ). To learn more about these infections in monkeys, we examined blood samples from 50 cynomolgus monkeys caught by the Department of Wildlife and National Parks at 12 residential areas in Peninsular Malaysia during a population management and wildlife disease surveillance program (January 2012–December 2013). Most monkeys (14 male, 36 female) were adults and were active and healthy. DNA was extracted from 200 μL of each blood sample by using a QIAamp DNA Mini Kit (QIAGEN, Hilden, Germany). We performed PCRs selective for the rickettsial citrate synthase gene (gltA) by using primers CS-78 and CS-323 and for the 135-kDa outer membrane protein B gene (ompB) by using primers 120-M59 and 120-807 ( 7 ). As positive controls, we used cloned PCR4-TOPO TA plasmids (Invitrogen, Carlsbad, CA, USA) with amplified gltA fragment from R. honei (strain TT118) and ompB fragment from a rickettsial endosymbiont (98% similarity to R. raoultii) of a tick sample. Amplification of anaplasma DNA was performed by using a group-specific primer pair (EHR 16SD/EHR 16SR) ( 8 ). As a positive control for the PCR, we used an A. marginale–infected cattle blood sample. The full-length sequences of the Anaplasma 16S rRNA gene were obtained by amplification with primers ATT062F and ATT062R ( 9 ). Sequence determination of the amplicons was performed by using forward and reverse primers of respective PCRs on an ABI PRISM 377 Genetic Analyzer (Applied Biosystems, Waltham, MA, USA). To search for homologous sequences in the GenBank database, we performed a BLAST (http://blast.ncbi.nlm.nih.gov/Blast.cgi) analysis and constructed a dendrogram based on 16S rDNA sequences of A. bovis ( 10 ). The rickettsial gltA gene was detected from 12 (24%) blood samples of mostly male monkeys from 8 locations. BLAST analysis of 210 nucleotides (GenBank accession no. KP126803) amplified from all samples demonstrated 100% sequence similarity with Rickettsia sp. RF2125 (accession no. AF516333), Candidatus Rickettsia asemboensis (accession no. JN315968), and Rickettsia spp. clone 4G/JP102 and 11TP21 (accession nos. JN982949 and JN982950), which had been identified from cat fleas in Southeast Asia, Africa, and Costa Rica, respectively. The rickettsial sequence also showed 99.0% similarity (2-nt difference) with R. felis–type strain (accession no. CP000053). The rickettsial ompB gene was amplified from 4 samples, and BLAST analysis of the sequences (556–779 bp) revealed closest match to several R. felis–like organisms, including Rickettsia sp. RF2125 (100%, accession no. JX183538) and Candidatus Rickettsia asemboensis (99%, accession no. JN315972). BLAST analysis of the longest ompB sequence (accession no. KP126804) obtained in this study showed 93% similarity with that of the R. felis–type strain. Anaplasma DNA was amplified from 5 (10%) monkeys at 2 locations by using group-specific primers. Analysis of the nearly full-length sequences of the A. bovis 16S rRNA gene (1,457 nt) revealed 3 sequence types (GenBank accession nos. KM114611–3) with 99.1%–99.2% homology to that of the A. bovis strain from cattle in South Africa (accession no. U03775). The phylogenetic tree (Figure) inferred by using various Anaplasma species confirms the clustering of the strains from monkeys with A. bovis from different animals (i.e., goats, cattle, deer, ticks, wild boars, dogs, raccoons, leopard cats, eastern rock sengis, and cottontail rabbits). Co-infection of R. felis–like organisms and A. bovis was detected in only 1 sample. Figure Phylogenetic relationships among various Anaplasma species, based on partial sequences of the 16S rRNA gene (1,263 bp). The dendrogram was constructed by using the neighbor-joining method in MEGA6 software ( 10 ) with the maximum composite likelihood substitution model and bootstrapping with 1,000 replicates. Rickettsia rickettsii (U11021) was used as an outgroup. Numbers in brackets are GenBank accession numbers. Representative Malaysian A. bovis sequences were deposited into the GenBank database under accession nos. KM114611–3. Scale bar indicates nucleotide substitutions per site. Infections caused by R. felis–like organisms and A. bovis in the cynomolgus monkeys were subclinical (i.e., monkeys showed no evident signs of infection at the time of blood sampling). The diverse range of the organisms’ ectoparasite and animal hosts raises concern about their potential risk to human and animal health. Further study on the interactions between the microbes, vectors, and reservoir hosts is needed to assess their effects on public health.

J Dumler,  A F Barbet,  C Bekker … (2001)
The genera Anaplasma, Ehrlichia, Cowdria, Neorickettsia and Wolbachia encompass a group of obligate intracellular bacteria that reside in vacuoles of eukaryotic cells and were previously placed in taxa based upon morphological, ecological, epidemiological and clinical characteristics. Recent genetic analyses of 16S rRNA genes, groESL and surface protein genes have indicated that the existing taxa designations are flawed. All 16S rRNA gene and groESL sequences deposited in GenBank prior to 2000 and selected sequences deposited thereafter were aligned and phylogenetic trees and bootstrap values were calculated using the neighbour-joining method and compared with trees generated with maximum-probability, maximum-likelihood, majority-rule consensus and parsimony methods. Supported by bootstrap probabilities of at least 54%, 16S rRNA gene comparisons consistently clustered to yield four distinct clades characterized roughly as Anaplasma (including the Ehrlichia phagocytophila group, Ehrlichia platys and Ehrlichia bovis) with a minimum of 96.1% similarity, Ehrlichia (including Cowdria ruminantium) with a minimum of 97.7% similarity, Wolbachia with a minimum of 95.6% similarity and Neorickettsia (including Ehrlichia sennetsu and Ehrlichia risticii) with a minimum of 94.9% similarity. Maximum similarity between clades ranged from 87.1 to 94.9%. Insufficient differences existed among E. phagocytophila, Ehrlichia equi and the human granulocytic ehrlichiosis (HGE) agent to support separate species designations, and this group was at least 98.2% similar to any Anaplasma species. These 16S rRNA gene analyses are strongly supported by similar groESL clades, as well as biological and antigenic characteristics. It is proposed that all members of the tribes Ehrlichieae and Wolbachieae be transferred to the family Anaplasmataceae and that the tribe structure of the family Rickettsiaceae be eliminated. The genus Anaplasma should be emended to include Anaplasma (Ehrlichia) phagocytophila comb. nov. (which also encompasses the former E. equi and the HGE agent), Anaplasma (Ehrlichia) bovis comb. nov. and Anaplasma (Ehrlichia) platys comb. nov., the genus Ehrlichia should be emended to include Ehrlichia (Cowdria) ruminantium comb. nov. and the genus Neorickettsia should be emended to include Neorickettsia (Ehrlichia) risticii comb. nov. and Neorickettsia (Ehrlichia) sennetsu comb. nov.

Rickettsia felis: from a rare disease in the USA to a common cause of fever in sub-Saharan Africa.

P. Parola (2011)
Rickettsia felis is a spotted fever group rickettsia that has been definitely described in 2002. Within the last 20 years, there have been a growing number of reports implicating R. felis as a human pathogen, parallel to the fast-growing reports of the worldwide detection of R. felis in arthropod hosts, mainly the cat flea Ctenocephalides felis felis. R. felis is now known as the agent of the so-called flea-borne spotted fever, with more than 70 cases documented in the literature. Recently, two studies respectively conducted in Senegal and Kenya, have challenged the importance of R. felis infection in patients with unexplained fever in sub-Saharan Africa. We focus here on the epidemiological and clinical aspects of R. felis infection. More studies are needed, including the study of other arthropod vectors, but it can be speculated that R. felis infection might be an important neglected agent of fever in sub-Saharan Africa. © 2011 The Author. Clinical Microbiology and Infection © 2011 European Society of Clinical Microbiology and Infectious Diseases.

Detection of ehrlichiae in African ticks by polymerase chain reaction.