The oral bioavailability, excretion and cytochrome P450 inhibition properties of epiberberine: an in vivo and in vitro evaluation 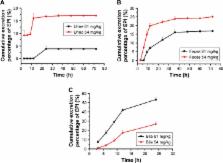 Epiberberine (EPI) is a novel and potentially effective therapeutic and preventive agent for diabetes and cardiovascular disease. To evaluate its potential value for drug development, a specific, sensitive and robust high-performance liquid chromatography-tandem mass spectrometry assay for the determination of EPI in rat biological samples was established. This assay was used to study the pharmacokinetics, bioavailability and excretion of EPI in rats after oral administration. In addition, a cocktail method was used to compare the inhibition characteristics of EPI on cytochrome P450 (CYP450) isoforms in human liver microsomes (HLMs) and rat liver microsomes (RLMs). The results demonstrated that EPI was rapidly absorbed and metabolized after oral administration (10, 54 or 81 mg/kg) in rats, with T max of 0.37–0.42 h and T 1/2 of 0.49–2.73 h. The C max and area under the curve values for EPI increased proportionally with the dose, and the oral absolute bioavailability was 14.46%. EPI was excreted mainly in bile and feces, and after its oral administration to rats, EPI was eliminated predominantly by the kidneys. A comparison of the current half-maximal inhibitory concentration and K i values revealed that EPI demonstrated an obvious inhibitory effect on CYP2C9 and CYP2D6. Furthermore, its effect was stronger in HLM than in RLM, more likely to be a result of noncompetitive inhibition.

Sixun Guo,  Yan Liu,  Zhiping Lin … (2014)
Background Chemicals of herbal products may cause unexpected toxicity or adverse effect by the potential for alteration of the activity of CYP450 when co-administered with other drugs. Eleutherococcus senticosus (ES), has been widely used as a traditional herbal medicine and popular herbal dietary supplements, and often co-administered with many other drugs. The main bioactive constituents of ES were considered to be eleutherosides including eleutheroside B (EB) and eleutheroside E (EE). This study was to investigate the effects of EB and EE on CYP2C9, CYP2D6, CYP2E1 and CYP3A4 in rat liver microsomes in vitro. Method Probe drugs of tolbutamide (TB), dextromethorphan (DM), chlorzoxazone (CLZ) and testosterone (TS) as well as eleutherosides of different concentrations were added to incubation systems of rat liver microsomes in vitro. After incubation, validated HPLC methods were used to quantify relevant metabolites. Results The results suggested that EB and EE exhibited weak inhibition against the activity of CYP2C9 and CYP2E1, but no effects on CYP2D6 and CYP3A4 activity. The IC50 values for EB and EE were calculated to be 193.20 μM and 188.36 μM for CYP2E1, 595.66 μM and 261.82 μM for CYP2C9, respectively. Kinetic analysis showed that inhibitions of CYP2E1 by EB and EE were best fit to mixed-type with Ki value of 183.95 μM and 171.63 μM, respectively. Conclusions These results indicate that EB and EE may inhibit the metabolism of drugs metabolized via CYP2C9 and CYP2E1, and have the potential to increase the toxicity of the drugs.

Guang-Chuan Wang,  Hong Xie,  Chang Liu … (2010)
Berberine, one of the most commonly used natural products, exhibits a poor plasma concentration-effect relationship whose underlying mechanisms remain largely unclear. This study was designed to test the hypothesis that extensive first-pass elimination and abundant tissue distribution of berberine may be its specific pharmacokinetic properties. For that, four different dosing routes, intragastric, intraduodenal, intraportal, and intravenous, were used to investigate the gastric, intestinal, and hepatic first-pass elimination of berberine. After intragastric dosing, approximately half of berberine ran intact through the gastrointestinal tract and another half was disposed of by the small intestine, leading to an extremely low extent of absolute oral bioavailability in rats (0.36%). Moreover, the major berberine metabolites were identified and quantified in rat enterocyte S9 fractions, portal vein plasma, and intestinal perfusates; plasma concentrations and tissue distribution of berberine and its major metabolites were determined as well. Data indicated that M1, M2 glucuronide, and M3 were the major metabolites generated from the small intestine and that there was a 70-fold increase in the ratio of the area under the concentration-time curve value for berberine (liver versus plasma). We conclude that intestinal first-pass elimination of berberine is the major barrier of its oral bioavailability and that its high extraction and distribution in the liver could be other important factors that lead to its low plasma levels in rats.

The involvement of P-glycoprotein in berberine absorption.