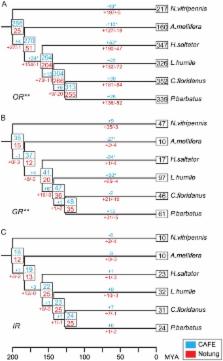 Ants are a highly successful family of insects that thrive in a variety of habitats across the world. Perhaps their best-known features are complex social organization and strict division of labor, separating reproduction from the day-to-day maintenance and care of the colony, as well as strict discrimination against foreign individuals. Since these social characteristics in ants are thought to be mediated by semiochemicals, a thorough analysis of these signals, and the receptors that detect them, is critical in revealing mechanisms that lead to stereotypic behaviors. To address these questions, we have defined and characterized the major chemoreceptor families in a pair of behaviorally and evolutionarily distinct ant species, Camponotus floridanus and Harpegnathos saltator. Through comprehensive re-annotation, we show that these ant species harbor some of the largest yet known repertoires of odorant receptors ( Ors) among insects, as well as a more modest number of gustatory receptors ( Grs) and variant ionotropic glutamate receptors ( Irs). Our phylogenetic analyses further demonstrate remarkably rapid gains and losses of ant Ors, while Grs and Irs have also experienced birth-and-death evolution to different degrees. In addition, comparisons of antennal transcriptomes between sexes identify many chemoreceptors that are differentially expressed between males and females and between species. We have also revealed an agonist for a worker-enriched OR from C. floridanus, representing the first case of a heterologously characterized ant tuning Or. Collectively, our analysis reveals a large number of ant chemoreceptors exhibiting patterns of differential expression and evolution consistent with sex/species-specific functions. These differentially expressed genes are likely associated with sex-based differences, as well as the radically different social lifestyles observed between C. floridanus and H. saltator, and thus are targets for further functional characterization. Our findings represent an important advance toward understanding the molecular basis of social interactions and the differential chemical ecologies among ant species.

Chemical communication is an important factor in the regulation of social interaction in animals. The family of eusocial insects commonly known as ants offers an almost unique opportunity for examining the genetic basis for the chemosensory pathways that underlie ant sociality. In order to address this issue, we have manually and comprehensively reannotated the chemoreceptor repertoire in a pair of evolutionarily and behaviorally divergent ant species, Camponotus floridanus and Harpegnathos saltator. In addition, we have used next-generation RNA sequencing to examine the chemosensory receptor transcriptome between males and females within these species. Our analysis demonstrates rapid gene birth-and-death for the ant odorant and gustatory receptor gene families, as well as clear differences in the expression of particular subsets of chemoreceptor genes between males and females. Finally, we have begun to examine the odor space within these discrete social units by heterologous characterization of the first C. floridanus odorant receptor that also exhibits sex-specific differential expression. Taken together, our results provide a foundation for future studies of the genetic basis for the chemical signaling and chemical ecology underlying the dramatically different social lifestyles exhibited by these and other species of ants.

Tatsuro Nakagawa,  Leslie B. Vosshall,  Takao Nakagawa … (2008)
In insects, each olfactory sensory neuron expresses between one and three ligand-binding members of the olfactory receptor (OR) gene family, along with the highly conserved and broadly expressed Or83b co-receptor. The functional insect OR consists of a heteromeric complex of unknown stoichiometry but comprising at least one variable odorant-binding subunit and one constant Or83b family subunit. Insect ORs lack homology to G-protein-coupled chemosensory receptors in vertebrates and possess a distinct seven-transmembrane topology with the amino terminus located intracellularly. Here we provide evidence that heteromeric insect ORs comprise a new class of ligand-activated non-selective cation channels. Heterologous cells expressing silkmoth, fruitfly or mosquito heteromeric OR complexes showed extracellular Ca2+ influx and cation-non-selective ion conductance on stimulation with odorant. Odour-evoked OR currents are independent of known G-protein-coupled second messenger pathways. The fast response kinetics and OR-subunit-dependent K+ ion selectivity of the insect OR complex support the hypothesis that the complex between OR and Or83b itself confers channel activity. Direct evidence for odorant-gated channels was obtained by outside-out patch-clamp recording of Xenopus oocyte and HEK293T cell membranes expressing insect OR complexes. The ligand-gated ion channel formed by an insect OR complex seems to be the basis for a unique strategy that insects have acquired to respond to the olfactory environment.

Drosophila odorant receptors are both ligand-gated and cyclic-nucleotide-activated cation channels.

Bill Hansson,  Dieter Wicher,  Regine Heller … (2008)
From worm to man, many odorant signals are perceived by the binding of volatile ligands to odorant receptors that belong to the G-protein-coupled receptor (GPCR) family. They couple to heterotrimeric G-proteins, most of which induce cAMP production. This second messenger then activates cyclic-nucleotide-gated ion channels to depolarize the olfactory receptor neuron, thus providing a signal for further neuronal processing. Recent findings, however, have challenged this concept of odorant signal transduction in insects, because their odorant receptors, which lack any sequence similarity to other GPCRs, are composed of conventional odorant receptors (for example, Or22a), dimerized with a ubiquitously expressed chaperone protein, such as Or83b in Drosophila. Or83b has a structure akin to GPCRs, but has an inverted orientation in the plasma membrane. However, G proteins are expressed in insect olfactory receptor neurons, and olfactory perception is modified by mutations affecting the cAMP transduction pathway. Here we show that application of odorants to mammalian cells co-expressing Or22a and Or83b results in non-selective cation currents activated by means of an ionotropic and a metabotropic pathway, and a subsequent increase in the intracellular Ca(2+) concentration. Expression of Or83b alone leads to functional ion channels not directly responding to odorants, but being directly activated by intracellular cAMP or cGMP. Insect odorant receptors thus form ligand-gated channels as well as complexes of odorant-sensing units and cyclic-nucleotide-activated non-selective cation channels. Thereby, they provide rapid and transient as well as sensitive and prolonged odorant signalling.

Phylogeny of the ants: diversification in the age of angiosperms.

Grant Pierce,  Corrie Moreau,  S Archibald … (2006)
We present a large-scale molecular phylogeny of the ants (Hymenoptera: Formicidae), based on 4.5 kilobases of sequence data from six gene regions extracted from 139 of the 288 described extant genera, representing 19 of the 20 subfamilies. All but two subfamilies are recovered as monophyletic. Divergence time estimates calibrated by minimum age constraints from 43 fossils indicate that most of the subfamilies representing extant ants arose much earlier than previously proposed but only began to diversify during the Late Cretaceous to Early Eocene. This period also witnessed the rise of angiosperms and most herbivorous insects.

This work was funded by Howard Hughes Medical Institute Collaborative Innovation Award #2009005 ( http://www.hhmi.org/news/20081120.html). The funders had no role in study design, data collection and analysis, decision to publish, or preparation of the manuscript.