A Novel Dominant Mutation in SAG, the Arrestin-1 Gene, Is a Common Cause of Retinitis Pigmentosa in Hispanic Families in the Southwestern United States 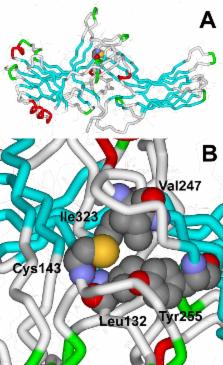 To identify the causes of autosomal dominant retinitis pigmentosa (adRP) in a cohort of families without mutations in known adRP genes and consequently to characterize a novel dominant-acting missense mutation in SAG.

Eight families in a cohort of 300 adRP families, and four additional families, were found to have a novel heterozygous mutation in the SAG gene, c.440G>T; p.Cys147Phe. Patients exhibited symptoms of retinitis pigmentosa and none showed symptoms characteristic of Oguchi disease. All families are of Hispanic descent and most were ascertained in Texas or California. A single haplotype including the SAG mutation was identified in all families. The mutation dramatically alters a conserved amino acid, is extremely rare in global databases, and was not found in 4000+ exomes from Hispanic controls. Molecular modeling based on the crystal structure of bovine arrestin-1 predicts protein misfolding/instability.

This is the first dominant-acting mutation identified in SAG, a founder mutation possibly originating in Mexico several centuries ago. The phenotype is clearly adRP and is distinct from the previously reported phenotypes of recessive null mutations, that is, Oguchi disease and recessive RP. The mutation accounts for 3% of the 300 families in the adRP Cohort and 36% of Hispanic families in this cohort.

Special Issue: Social pedagogical work with children, youth and their families with refugee and migrant background in Europe

Elinor L. Sullivan,  Sara Bowne,  Stephen Daiger (2007)
Exceptional progress has been made during the past two decades in identifying genes causing inherited retinal diseases such as retinitis pigmentosa. An inescapable consequence is that the relationship between genes, mutations, and clinical findings has become very complex. Success in identifying the causes of inherited retinal diseases has many implications, including a better understanding of the biological basis of vision and insights into the processes involved in retinal pathology. From a clinical point of view, there are two important questions arising from these developments: where do we stand today in finding disease-causing mutations in affected individuals, and what are the implications of this information for clinical practice? This perspective addresses these questions specifically for retinitis pigmentosa, but the observations apply generally to other forms of inherited eye disease.

Prevalence of disease-causing mutations in families with autosomal dominant retinitis pigmentosa: a screen of known genes in 200 families.

David Birch,  Joshua Lewis,  Lucas S Blanton … (2006)
To survey families with clinical evidence of autosomal dominant retinitis pigmentosa (adRP) for mutations in genes known to cause adRP. Two hundred adRP families, drawn from a cohort of more than 400 potential families, were selected by analysis of pedigrees. Minimum criteria for inclusion in the adRP cohort included either evidence of at least three generations of affected individuals or two generations with evidence of male-to-male transmission. Probands from each family were screened for mutations in 13 genes known to cause adRP: CA4, CRX, FSCN2, IMPDH1, NRL, PRPF3 (RP18), PRPF8 (RP13), PRPF31 (RP11), RDS, RHO, ROM1, RP1, and RP9. Families without mutations in autosomal genes and in which an X-linked mode of inheritance could not be excluded were tested for mutations in ORF 15 of X-linked RPGR. Potentially pathogenic variants were evaluated based on a variety of genetic and computational criteria, to confirm or exclude pathogenicity. A total of 82 distinct, rare (nonpolymorphic) variants were detected among the genes tested. Of these, 57 are clearly pathogenic based on multiple criteria, 10 are probably pathogenic, and 15 are probably benign. In the cohort of 200 families, 94 (47%) have one of the clearly pathogenic variants and 10 (5%) have one of the probably pathogenic variants. One family (0.5%) has digenic RDS-ROM1 mutations. Two families (1%) have a pathogenic RPGR mutation, indicating that families with apparent autosomal transmission of RP may actually have X-linked genetic disease. Thus, 107 families (53.5%) have mutations in known genes, leaving 93 whose underlying cause is still unknown. Together, the known adRP genes account for retinal disease in approximately half of the families in this survey, mostly Americans of European origin. Among the adRP genes, IMPDH1, PRPF8, PRPF31, RDS, RHO, and RP1 each accounts for more than 2% of the total; CRX, PRPF3, and RPGR each accounts for roughly 1%. Disease-causing mutations were not found in CA4, FSCN2, NRL, or RP9. Because some mutations are frequent and some regions are more likely to harbor mutations than others, more than two thirds of the detected mutations can be found by screening less than 10% of the total gene sequences. Among the remaining families, mutations may lie in regions of known genes that were not tested, mutations may not be detectable by PCR-based sequencing, or other loci may be involved.

Mutations within the rhodopsin gene in patients with autosomal dominant retinitis pigmentosa.

Beth L. Hahn,  E Reichel,  Eliot L. Berson … (1990)
Night blindness is an early symptom of retinitis pigmentosa. The rod photoreceptors are responsible for night vision and use rhodopsin as the photosensitive pigment. We found three mutations in the human rhodopsin gene; each occurred exclusively in the affected members of some families with autosomal dominant retinitis pigmentosa. Two mutations were C-to-T transitions involving separate nucleotides of codon 347; the third was a C-to-G transversion in codon 58. Each mutation corresponded to a change in one amino acid residue in the rhodopsin molecule. None of these mutations were found in 106 unrelated normal subjects who served as controls. When the incidence of these three mutations was added to that of a previously reported mutation involving codon 23, 27 of 150 unrelated patients with autosomal dominant retinitis pigmentosa (18 percent) were found to carry one of these four defects in the rhodopsin gene. All 27 patients had abnormal rod function on monitoring of their electroretinograms. It appears that patients with the mutation involving codon 23 probably descend from a single ancestor. In some patients with autosomal dominant retinitis pigmentosa, the disease is caused by one of a variety of mutations of the rhodopsin gene.

LSS and SJB contributed equally to the work presented here and should therefore be regarded as equivalent authors.