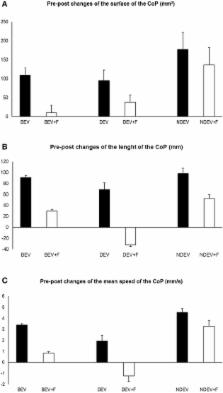 The objective of this study is to examine the role of proprioception in postural balance in children with strabismus before and after realignment of their visual axes by eye surgery. Postural recordings were made with the TechnoConcept® force platform in 23 children. Several conditions were studied, whether the subjects had both eyes open, or either the dominant or the non-dominant eye open, without and with foam pads of 4 mm underfoot. Recordings were performed before and after strabismus surgery. The surface area, the length and the mean speed of the center of pressure (CoP) were analyzed. Before strabismus surgery, all children showed better stability with both eyes open with respect to the condition with the non-dominant eye open; furthermore postural stability improved in the presence of foam pads. After surgery, the surface area of CoP decreased significantly, especially in the non-dominant eye viewing condition. We suggest that strabismic children use mainly proprioceptive information in order to control their posture, but also visual inputs, which are important for obtaining a good postural stability. The alignment of the visual axes after surgery provides enhanced postural stability, suggesting, again the major role of visual inputs in the control of posture. Proprioceptive plasticity after strabismus surgery may allow better visual rehabilitation.

L M Nashner (1976)
Doubt about the role of stretch reflexes in movement and posture control has remained in part because the questions of reflex "usefulness" and the postural "set" have not been adequately considered in the design of experimental paradigms. The intent of this study was to discover the stabilizing role of stretch reflexes acting upon the ankle musculature while human subjects performed stance tasks requiring several different postural "sets". Task specific differences of reflex function were investigated by experiments in which the role of stretch reflexes to stabilize sway doing stance could be altered to be useful, of no use, or inappropriate. Because the system has available a number of alternate inputs to posture (e.g., vestibular and visual), stretch reflex responses were in themselves not necessary to prevent a loss of balance. Nevertheless, 5 out of 12 subjects in this study used long-latency (120 msec) stretch reflexes to help reduce postural sway. Following an unexpected change in the usefulness of stretch reflexes, the 5 subjects progressively altered reflex gain during the succeeding 3-5 trials. Adaptive changes in gain were always in the sense to reduce sway, and therefore could be attenuating or facilitating the reflex response. Comparing subjects using the reflex with those not during so, stretch reflex control resulted in less swaying when the task conditions were unchanging. However, the 5 subjects using reflex controls oftentimes swayed more during the first 3-5 trials after a change, when inappropriate responses were elicited. Four patients with clinically diagnosed cerebellar deficits were studied briefly. Among the stance tasks, their performance was similar to normal in some and significantly poorer in others. Their most significant deficit appeared to be the inability to adapt long-latency reflex gain following changes in the stance task. The study concludes with a discussion of the role of stretch reflexes within a hierarchy of controls ranging from muscle stiffness up to centrally initiated responses.

The role of plantar cutaneous sensation in unperturbed stance.

Filip Y. F. L. De Vos,  V Santana,  Lars I. E. Oddsson (2004)
Considerable evidence shows that sensation from the feet and ankles is important for standing balance control. It remains unclear, however, to what extent specific foot and ankle sensory systems are involved. This study focused on the role of plantar cutaneous sensation in quasi-static balance control. Iontophoretic delivery of anesthesia was used to reduce the sensitivity of the forefoot soles. In a follow-up experiment, subjects received intradermal injections of local anesthetic into the entire weight-bearing surface of the foot soles. Properties of the center-of-foot-pressure (COP) trajectories and ground reaction shear forces were analyzed using stabilogram-diffusion analysis and summary statistics. Effects of foot-sole anesthesia were generally small and mostly manifested as increases in COP velocity. Magnitude of COP displacement was unaffected by foot-sole anesthesia. Forefoot anesthesia mainly influenced mediolateral posture control, whereas complete foot-sole anesthesia had an impact on anteroposterior control. During bipedal stance, statistically significant effects of foot-sole anesthesia on COP were present only under eyes-closed conditions and included increases in COP velocity (11-12%) and shear force root-mean-square (13%), the latter indicating increases in body center-of-mass accelerations due to the foot-sole anesthesia. Similar effects were seen for unipedal stance in addition to an increase in anteroposterior COP median frequency (36%). Changes in stabilogram-diffusion parameters were confined to the short-term region suggesting that sensory information from the foot soles is mainly used to set a relevant background muscle activity for a given posture and support surface characteristic, and consequently is of little importance for feedback control during unperturbed stance. In general, this study demonstrates that plantar sensation is of moderate importance for the maintenance of normal standing balance when the postural control system is challenged by unipedal stance or by closing of the eyes. The impact of reduced plantar sensitivity on postural control is expected to increase with the loss of additional sensory modalities such as the concomitant proprioceptive deficits commonly associated with peripheral neuropathies.

Lorenz Assländer,  Robert Peterka (2014)
Healthy humans control balance during stance by using an active feedback mechanism that generates corrective torque based on a combination of movement and orientation cues from visual, vestibular, and proprioceptive systems. Previous studies found that the contribution of each of these sensory systems changes depending on perturbations applied during stance and on environmental conditions. The process of adjusting the sensory contributions to balance control is referred to as sensory reweighting. To investigate the dynamics of reweighting for the sensory modalities of vision and proprioception, 14 healthy young subjects were exposed to six different combinations of continuous visual scene and platform tilt stimuli while sway responses were recorded. Stimuli consisted of two components: 1) a pseudorandom component whose amplitude periodically switched between low and high amplitudes and 2) a low-amplitude sinusoidal component whose amplitude remained constant throughout a trial. These two stimuli were mathematically independent of one another and, thus, permitted separate analyses of sway responses to the two components. For all six stimulus combinations, the sway responses to the constant-amplitude sine were influenced by the changing amplitude of the pseudorandom component in a manner consistent with sensory reweighting. Results show clear evidence of intra- and intermodality reweighting. Reweighting dynamics were asymmetric, with slower reweighting dynamics following a high-to-low transition in the pseudorandom stimulus amplitude compared with low-to-high amplitude shifts, and were also slower for inter- compared with intramodality reweighting.