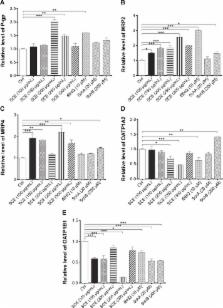 Drug metabolizing enzymes (DMEs) and drug transporters are regulated via epigenetic, transcriptional, posttranscriptional, and translational and posttranslational modifications. Phase I and II DMEs and drug transporters play an important role in the disposition and detoxification of a large number of endogenous and exogenous compounds. The nuclear factor (erythroid-derived 2)-like 2 (Nrf2) is a critical regulator of a variety of important cytoprotective genes that are involved in disposition and detoxification of xenobiotics. Schisandra chinensis (SC) is a commonly used traditional Chinese herbal medicine that has been primarily used to protect the liver because of its potent antioxidative and anti-inflammatory activities. SC can modulate some DMEs and drug transporters, but the underlying mechanisms are unclear. In this study, we aimed to explore the role of Nrf2 in the regulatory effect of SC extract (SCE) on selected DMEs and drug transporters in human hepatocellular liver carcinoma cell line (HepG2) cells. The results showed that SCE, schisandrin A, and schisandrin B significantly increased the expression of NAD(P)H: Nicotinamide Adenine Dinucleotide Phosphate-oxidase or:quinone oxidoreductase 1, heme oxygenase-1, glutamate–cysteine ligase, and glutathione S-transferase A4 at both transcriptional and posttranscriptional levels. Incubation of HepG2 cells with SCE resulted in a significant increase in the intracellular level of glutathione and total glutathione S-transferase content. SCE significantly elevated the messenger ribonucleic acid and protein levels of P-glycoprotein and multidrug resistance-associated protein 2 and 4, whereas the expression of organic anion transporting peptide 1A2 and 1B1 was significantly downregulated by SCE. Knockdown of Nrf2 by small interfering ribonucleic acid attenuated the regulatory effect of SCE on these DMEs and drug transporters. SCE significantly upregulated Nrf2 and promoted the translocation of Nrf2 from cytoplasm to the nuclei. Additionally, SCE significantly suppressed the expression of cytosolic Kelch-like ECH-associated protein 1 (the repressor of Nrf2) and remarkably increased Nrf2 stability in HepG2 cells. Taken together, our findings suggest that the hepatoprotective effects of SCE may be partially ascribed to the modulation of DMEs and drug transporters via Nrf2-mediated signaling pathway. SCE may alter the pharmacokinetics of other coadministered drugs that are substrates of these DMEs and transporters and thus cause unfavorable herb–drug interactions.

Adriane Fugh-Berman (2000)
Concurrent use of herbs may mimic, magnify, or oppose the effect of drugs. Plausible cases of herb-drug interactions include: bleeding when warfarin is combined with ginkgo (Ginkgo biloba), garlic (Allium sativum), dong quai (Angelica sinensis), or danshen (Salvia miltiorrhiza); mild serotonin syndrome in patients who mix St John's wort (Hypericum perforatum) with serotonin-reuptake inhibitors; decreased bioavailability of digoxin, theophylline, cyclosporin, and phenprocoumon when these drugs are combined with St John's wort; induction of mania in depressed patients who mix antidepressants and Panax ginseng; exacerbation of extrapyramidal effects with neuroleptic drugs and betel nut (Areca catechu); increased risk of hypertension when tricyclic antidepressants are combined with yohimbine (Pausinystalia yohimbe); potentiation of oral and topical corticosteroids by liquorice (Glycyrrhiza glabra); decreased blood concentrations of prednisolone when taken with the Chinese herbal product xaio chai hu tang (sho-salko-to); and decreased concentrations of phenytoin when combined with the Ayurvedic syrup shankhapushpi. Anthranoid-containing plants (including senna [Cassia senna] and cascara [Rhamnus purshiana]) and soluble fibres (including guar gum and psyllium) can decrease the absorption of drugs. Many reports of herb-drug interactions are sketchy and lack laboratory analysis of suspect preparations. Health-care practitioners should caution patients against mixing herbs and pharmaceutical drugs.

Keap1 regulates both cytoplasmic-nuclear shuttling and degradation of Nrf2 in response to electrophiles.

Tetsuro Ishii,  Y Katoh,  Ken Itoh … (2003)
Transcription factor Nrf2 regulates the expression of a set of detoxifying and anti-oxidant enzyme genes. Several lines of evidence suggest that electrophiles and reactive oxygen species liberate Nrf2 from its cytoplasmic repressor Keap1 and provoke the accumulation of Nrf2 in the nucleus. To elucidate the molecular mechanisms as to how Nrf2 is activated by inducers, we examined the cytoplasmic-nuclear shuttling and turnover of Nrf2. We found that Nrf2 is rapidly degraded through the proteasome pathway, while electrophiles cause Nrf2 nuclear translocation with concomitant stabilization. Crucial to the inducible accumulation of Nrf2 is the enfeebling of the Nrf2-Keap1 interaction by electrophiles. Exploiting mice which have the LacZ reporter gene knocked into the nrf2 locus, we revealed that the inducible accumulation of Nrf2 protein by electrophiles in macrophages and intestinal epithelia could be recapitulated by the Nrf2 N-terminal region in combination with a nuclear localization signal. We also found constitutive Nrf2 nuclear accumulation in Keap1-deficient mouse macrophages. Our results highlight the fact that Nrf2 protein turnover is regulated by Keap1 mediated subcellular compartmentalization.

Pharmacology of Schisandra chinensis Bail.: an overview of Russian research and uses in medicine.

Alexander Panossian,  Georg Wikman (2008)
Schisandra chinensis (Turcz.) Bail. is often referred to as an example of a medicinal plant with use in modern Chinese medicine. However, Schisandra chinensis first gained recognition as an adaptogen in the official medicine of the USSR in the early 1960s, principally as a result of the large number of pharmacological and clinical studies carried out by Russian scientists in the preceding two decades. Schizandra has now secured an established position within the medicine of Russia/USSR as evidenced by the inclusion of the drug in recent editions of the National Pharmacopoeia of the USSR and in the State Register of Drugs. Pharmacological studies on animals have shown that Schizandra increases physical working capacity and affords a stress-protective effect against a broad spectrum of harmful factors including heat shock, skin burn, cooling, frostbite, immobilisation, swimming under load in an atmosphere with decreased air pressure, aseptic inflammation, irradiation, and heavy metal intoxication. The phytoadaptogen exerts an effect on the central nervous, sympathetic, endocrine, immune, respiratory, cardiovascular, gastrointestinal systems, on the development of experimental atherosclerosis, on blood sugar and acid-base balance, and on uterus myotonic activity. Studies on isolated organs, tissues, cells and enzymes have revealed that Schizandra preparations exhibit strong antioxidant activities and affect smooth muscles, arachidonic acid release, biosynthesis of leukotriene B(4) in leukocytes, platelet activating factor activity, carbohydrate-phosphorus metabolism, the formation of heat shock protein and polyamines, tissue respiration and oxygen consumption, and the tolerance of an organism to oxygen intoxication. In healthy subjects, Schizandra increases endurance and accuracy of movement, mental performance and working capacity, and generates alterations in the basal levels of nitric oxide and cortisol in blood and saliva with subsequent effects on the blood cells, vessels and CNS. Numerous clinical trials have demonstrated the efficiency of Schizandra in asthenia, neuralgic and psychiatric (neurosis, psychogenic depression, astheno-depressive states, schizophrenia and alcoholism) disorders, in impaired visual function, hypotension and cardiotonic disorders, in epidemic waves of influenza, in chronic sinusitis, otitis, neuritis and otosclerosis, in pneumonia, radioprotection of the fetoplacental system of pregnant women, allergic dermatitis, acute gastrointestinal diseases, gastric hyper- and hypo-secretion, chronic gastritis, stomach and duodenal ulcers, wound healing and trophic ulcers. This review describes the considerable diversity of pharmacological effects of Schisandra chinensis reported in numerous studies carried out in the former USSR and which have been confirmed over more than 40 years of use of the plant as an official medicinal remedy. Such knowledge can be applied in the expansion of the use of Schizandra in the pharmacotherapy of European and other countries as well as for the further discovery of new drugs based on the lignans that constitute the main secondary metabolites of this plant.