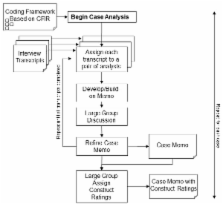 In the United States, as in many other parts of the world, the prevalence of overweight/obesity is at epidemic proportions in the adult population and even higher among Veterans. To address the high prevalence of overweight/obesity among Veterans, the MOVE!® weight management program was disseminated nationally to Veteran Affairs (VA) medical centers. The objective of this paper is two-fold: to describe factors that explain the wide variation in implementation of MOVE!; and to illustrate, step-by-step, how to apply a theory-based framework using qualitative data.

Of the 31 CFIR constructs assessed, ten constructs strongly distinguished between facilities with low versus high program implementation effectiveness. The majority (six) were related to the inner setting: networks and communications; tension for change; relative priority; goals and feedback; learning climate; and leadership engagement. One construct each, from intervention characteristics (relative advantage) and outer setting (patient needs and resources), plus two from process (executing and reflecting) also strongly distinguished between high and low implementation. Two additional constructs weakly distinguished, 16 were mixed, three constructs had insufficient data to assess, and one was not applicable. Detailed descriptions of how each distinguishing construct manifested in study facilities and a table of recommendations is provided.

This paper presents an approach for using the CFIR to code and rate qualitative data in a way that will facilitate comparisons across studies. An online Wiki resource ( http://www.wiki.cfirwiki.net) is available, in addition to the information presented here, that contains much of the published information about the CFIR and its constructs and sub-constructs. We hope that the described approach and open access to the CFIR will generate wide use and encourage dialogue and continued refinement of both the framework and approaches for applying it.

Overweight, obesity, and mortality in a large prospective cohort of persons 50 to 71 years old.

Kenneth F Adams, Arthur Schatzkin, Tamara Harris … (2006)
Obesity, defined by a body-mass index (BMI) (the weight in kilograms divided by the square of the height in meters) of 30.0 or more, is associated with an increased risk of death, but the relation between overweight (a BMI of 25.0 to 29.9) and the risk of death has been questioned. We prospectively examined BMI in relation to the risk of death from any cause in 527,265 U.S. men and women in the National Institutes of Health-AARP cohort who were 50 to 71 years old at enrollment in 1995-1996. BMI was calculated from self-reported weight and height. Relative risks and 95 percent confidence intervals were adjusted for age, race or ethnic group, level of education, smoking status, physical activity, and alcohol intake. We also conducted alternative analyses to address potential biases related to preexisting chronic disease and smoking status. During a maximum follow-up of 10 years through 2005, 61,317 participants (42,173 men and 19,144 women) died. Initial analyses showed an increased risk of death for the highest and lowest categories of BMI among both men and women, in all racial or ethnic groups, and at all ages. When the analysis was restricted to healthy people who had never smoked, the risk of death was associated with both overweight and obesity among men and women. In analyses of BMI during midlife (age of 50 years) among those who had never smoked, the associations became stronger, with the risk of death increasing by 20 to 40 percent among overweight persons and by two to at least three times among obese persons; the risk of death among underweight persons was attenuated. Excess body weight during midlife, including overweight, is associated with an increased risk of death. Copyright 2006 Massachusetts Medical Society.

Overweight and obesity: prevalence, consequences, and causes of a growing public health problem.

Sharon B. Wyatt, Karen P. Winters, Patricia M. Dubbert (2006)
This paper provides an overview of the evidence on the current epidemic of obesity in the United States. The prevalence of overweight and obesity now exceeds 60% among US adults, and the rate is rapidly increasing among children and adolescents. Dismal medical, social, and economic consequences are already apparent and likely to worsen without multipronged intervention. Increased rates of hypertension, diabetes, and dyslipidemia, among other medical conditions, threaten to shorten the longevity of the American populace by as much as 5 years. The incidence of depression is increasing and experts suggest this is linked with the increased prevalence of obesity. The cost of obesity-related medical care has increased astronomically since 1987, in addition to lost productivity and income. Novel multidisciplinary, preventive, and therapeutic approaches, and social changes are needed that address the complex interplay of biologic, genetic, and social factors that have created the current obesity epidemic.