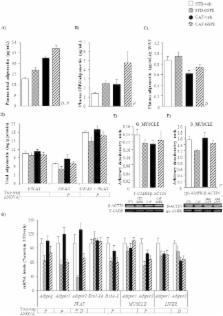 Previously, we demonstrated that a grape seed procyanidin extract (GSPE) supplementation in pregnant and lactating rats exerted both healthy and deleterious programming effects on their offspring. Here, we evaluated whether the administration of GSPE during lactation (100 mg.kg −1.day −1) in rats elicited beneficial effects in their normoweight (STD-GSPE group) and cafeteria-fed obese (CAF-GSPE group) adult male offspring. STD-GSPE and CAF-GSPE offspring showed increased energy expenditure and circulating total and high-molecular-weight adiponectin. However, these rats showed hyperinsulinemia, decreased insulin sensitivity, increased insulin resistance, down-regulated mRNA levels of adiponectin receptors in inguinal white adipose tissue ( Adipor1 and Adipor2) and soleus muscle ( Adipor2), and decreased levels of phosphorylated AMPK, the downstream post-receptor target of adiponectin, in the soleus muscle. These deleterious effects could be related to an increased lipid transfer to the pups through the milk, since GSPE-supplemented dams displayed decreased fat content and increased expression of lipogenic genes in their mammary glands, in addition to increased circulating total adiponectin and non-esterified free fatty acids. In conclusion, maternal intake of GSPE during lactation induced insulin resistance and an adiponectin resistance-like phenotype in their normoweight and obese offspring. These findings raise concerns about the possibility of using GSPE as a nutraceutical supplement during this period.

Atsushi Tsuchida,  Tetsuya Shiuchi,  Naoki H Kumagai … (2007)
Adiponectin has been shown to stimulate fatty acid oxidation and enhance insulin sensitivity through the activation of AMP-activated protein kinase (AMPK) in the peripheral tissues. The effects of adiponectin in the central nervous system, however, are still poorly understood. Here, we show that adiponectin enhances AMPK activity in the arcuate hypothalamus (ARH) via its receptor AdipoR1 to stimulate food intake; this stimulation of food intake by adiponectin was attenuated by dominant-negative AMPK expression in the ARH. Moreover, adiponectin also decreased energy expenditure. Adiponectin-deficient mice showed decreased AMPK phosphorylation in the ARH, decreased food intake, and increased energy expenditure, exhibiting resistance to high-fat-diet-induced obesity. Serum and cerebrospinal fluid levels of adiponectin and expression of AdipoR1 in the ARH were increased during fasting and decreased after refeeding. We conclude that adiponectin stimulates food intake and decreases energy expenditure during fasting through its effects in the central nervous system.

Adiponectin receptor as a key player in healthy longevity and obesity-related diseases.

Takashi Kadowaki,  Toshimasa Yamauchi (2013)
Adiponectin is a fat-derived hormone whose reduction plays central roles in obesity-linked diseases including insulin resistance/type 2 diabetes and atherosclerosis. The cloning of Adiponectin receptors AdipoR1 and AdipoR2 has stimulated adiponectin research, revealing pivotal roles for AdipoRs in pleiotropic adiponectin actions, as well as some postreceptor signaling mechanisms. Adiponectin signaling has thus become one of the major research fields in metabolism and clinical medicine. Studies on AdipoRs will further our understanding of the role of adiponectin in obesity-linked diseases and shortened life span and may guide the design of antidiabetic and antiaging drugs with AdipoR as a target. Copyright © 2013 Elsevier Inc. All rights reserved.