A ‘rare biosphere’ microorganism contributes to sulfate reduction in a peatland 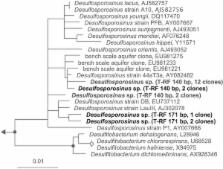 Methane emission from peatlands contributes substantially to global warming but is significantly reduced by sulfate reduction, which is fuelled by globally increasing aerial sulfur pollution. However, the biology behind sulfate reduction in terrestrial ecosystems is not well understood and the key players for this process as well as their abundance remained unidentified. Comparative 16S rRNA gene stable isotope probing in the presence and absence of sulfate indicated that a Desulfosporosinus species, which constitutes only 0.006% of the total microbial community 16S rRNA genes, is an important sulfate reducer in a long-term experimental peatland field site. Parallel stable isotope probing using dsrAB [encoding subunit A and B of the dissimilatory (bi)sulfite reductase] identified no additional sulfate reducers under the conditions tested. For the identified Desulfosporosinus species a high cell-specific sulfate reduction rate of up to 341 fmol SO 4 2− cell −1 day −1 was estimated. Thus, the small Desulfosporosinus population has the potential to reduce sulfate in situ at a rate of 4.0–36.8 nmol (g soil w. wt.) −1 day −1, sufficient to account for a considerable part of sulfate reduction in the peat soil. Modeling of sulfate diffusion to such highly active cells identified no limitation in sulfate supply even at bulk concentrations as low as 10 μM. Collectively, these data show that the identified Desulfosporosinus species, despite being a member of the ‘rare biosphere’, contributes to an important biogeochemical process that diverts the carbon flow in peatlands from methane to CO 2 and, thus, alters their contribution to global warming.

Roberta R Fulthorpe,  Flavio Camargo,  Samira Daroub … (2007)
Estimates of the number of species of bacteria per gram of soil vary between 2000 and 8.3 million (Gans et al., 2005; Schloss and Handelsman, 2006). The highest estimate suggests that the number may be so large as to be impractical to test by amplification and sequencing of the highly conserved 16S rRNA gene from soil DNA (Gans et al., 2005). Here we present the use of high throughput DNA pyrosequencing and statistical inference to assess bacterial diversity in four soils across a large transect of the western hemisphere. The number of bacterial 16S rRNA sequences obtained from each site varied from 26,140 to 53,533. The most abundant bacterial groups in all four soils were the Bacteroidetes, Betaproteobacteria and Alphaproteobacteria. Using three estimators of diversity, the maximum number of unique sequences (operational taxonomic units roughly corresponding to the species level) never exceeded 52,000 in these soils at the lowest level of dissimilarity. Furthermore, the bacterial diversity of the forest soil was phylum rich compared to the agricultural soils, which are species rich but phylum poor. The forest site also showed far less diversity of the Archaea with only 0.009% of all sequences from that site being from this group as opposed to 4%-12% of the sequences from the three agricultural sites. This work is the most comprehensive examination to date of bacterial diversity in soil and suggests that agricultural management of soil may significantly influence the diversity of bacteria and archaea.

William T Sloan,  Neil Hall,  Fiona Read … (2009)
We present an algorithm, PyroNoise, that clusters the flowgrams of 454 pyrosequencing reads using a distance measure that models sequencing noise. This infers the true sequences in a collection of amplicons. We pyrosequenced a known mixture of microbial 16S rDNA sequences extracted from a lake and found that without noise reduction the number of operational taxonomic units is overestimated but using PyroNoise it can be accurately calculated.

Marine microbial diversity: can it be determined?

Carlos Pedrós-Alió (2006)
Estimates of the order of magnitude for the total number of microbial species on Earth range from 10(3) to 10(9). Despite global dispersal of microorganisms, this number is probably rather large. The total biodiversity of an ecosystem is composed of two elements: first, a set of abundant taxa that carry out most ecosystem functions, grow actively and suffer intense losses through predation and viral lysis. These taxa are retrievable with molecular techniques but are difficult to grow in culture. Second, there is a seed bank of many rare taxa that are not growing or grow extremely slowly, do not experience viral lysis and predation is reduced. Such taxa are seldom retrieved by molecular techniques but many can be grown in culture, which explains the dictum 'everything is everywhere'.