Uterotonic drug quality: an assessment of the potency of injectable uterotonic drugs purchased by simulated clients in three districts in Ghana 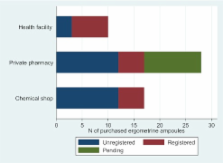 Given use of uterotonics for postpartum haemorrhage and other obstetric indications, the importance of potent uterotonics is indisputable. This study evaluated access to and potency of injectable uterotonics in Ghana.

Study design involved research assistants simulating clients to purchase oxytocin and ergometrine from different sources. Drug potency was measured via chemical assay by the Ghana Food and Drugs Board.

The study was conducted in three contrasting districts in Ghana.

The per cent of active pharmaceutical ingredient was measured to assess the quality of oxytocin and ergometrine.

The quality of injectable uterotonics in three contrasting districts in Ghana is a serious problem. Restrictions regarding the sale of unregistered drugs, and of registered drugs from unlicensed shops, are inadequately enforced. These problems likely exist elsewhere but are not assessed, as postmarketing drug quality surveillance is generally restricted to well-funded disease-specific programmes relying on antiretroviral, antimalarial and antibiotic drugs. Maternal health programmes must adopt and fund the same approach to drug quality as is standard in programmes addressing infectious disease.

Strengths and limitations of this study

Assessing the global availability of misoprostol.

Cléver R. G. de Farias,  C Harrison,  Lidia M. Fernández-Sevilla … (2009)
To assess the worldwide availability of misoprostol. Documenting the extent of misoprostol use in obstetrics-gynecology is difficult because the drug typically is unregistered for such indications. Data for 2002-2007 on annual sales (measured in weight) to hospitals and retail pharmacies, plus manufacturer prices per 200-microg misoprostol, were analyzed for medications containing misoprostol alone or combined with a nonsteroidal anti-inflammatory drug (NSAID); regional and country-specific trends were identified. Consumer prices per pill are documented for all formulations of registered medications. Of the misoprostol sold worldwide, 70% was misoprostol-NSAID-combination drugs; of this, 91% was sold in North America and Western Europe. Asia sold the most misoprostol-only drugs; sales increased dramatically in Bangladesh (by 128%) and India (646%), where various low-price brands are sold. Misoprostol sales decreased in Latin America but increased in the Middle East-North Africa and Sub-Saharan Africa; these regions generally had low amounts sold per population. Availability is improving in some low-income regions where misoprostol could significantly reduce maternal deaths due to postpartum hemorrhage and unsafe abortion.

Stability of essential drugs during shipment to the tropics.

H. Hogerzeil,  V Srdanovic,  N E Stjernstrom … (1992)
To determine whether present methods of international transport of essential drugs by sea adversely affect their quality. Controlled longitudinal study of drug shipments sent by sea from Unicef in Copenhagen to Lagos; to Mombasa and by land to Kampala; and to Bangkok. 11 essential drugs were stored in four locations on board the ships. Main shipping routes from Unicef, Copenhagen, to tropical countries. Temperature and relative humidity in the test packs during the journey. Amount of active ingredient in the drugs before and after shipment. Temperatures recorded within the test packs range from -3.5 degrees C to 42.4 degrees C and were 3-12 degrees C higher than the ambient temperature. Relative humidity within the packs ranged from 20% to 88%. Differences between the locations on board were negligible. Ergometrine injection, methylergometrine injection, and retinol capsules lost 1.5-5.8% of their activity. Ampoules of ergometrine showed a large variation in the amount of active ingredient after shipment, with three of 80 samples having concentrations 60% below those stated. Ampicillin, benzylpenicillin, phenoxymethylpenicillin, and tetracycline were not affected by transport. Drugs were exposed to a much higher temperature and humidity than is recommended by the manufacturer, especially in tropical harbours and during inland transport. Except for ergometrine and methylergometrine the transport would not affect clinical effectiveness.

The quality and stability of essential drugs in rural Zimbabwe: controlled longitudinal study.