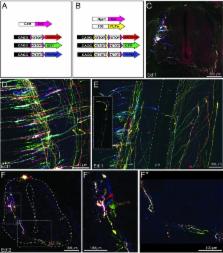 The genetic dissection of spinal circuits is an essential new means for understanding the neural basis of mammalian behavior. Molecular targeting of specific neuronal populations, a key instrument in the genetic dissection of neuronal circuits in the mouse model, is a complex and time-demanding process. Here we present a circuit-deciphering ‘tool box’ for fast, reliable and cheap genetic targeting of neuronal circuits in the developing spinal cord of the chick. We demonstrate targeting of motoneurons and spinal interneurons, mapping of axonal trajectories and synaptic targeting in both single and populations of spinal interneurons, and viral vector-mediated labeling of pre-motoneurons. We also demonstrate fluorescent imaging of the activity pattern of defined spinal neurons during rhythmic motor behavior, and assess the role of channel rhodopsin-targeted population of interneurons in rhythmic behavior using specific photoactivation.

Feng Zhang,  Johannes Vierock,  Ofer Yizhar … (2011)
The capture and utilization of light is an exquisitely evolved process. The single-component microbial opsins, although more limited than multicomponent cascades in processing, display unparalleled compactness and speed. Recent advances in understanding microbial opsins have been driven by molecular engineering for optogenetics and by comparative genomics. Here we provide a Primer on these light-activated ion channels and pumps, describe a group of opsins bridging prior categories, and explore the convergence of molecular engineering and genomic discovery for the utilization and understanding of these remarkable molecular machines. Copyright © 2011 Elsevier Inc. All rights reserved.

Sten Grillner,  Thomas M. Jessell (2009)
Spinal interneurons are organized into networks that control the activity and output of the motor system. This review outlines recent progress in defining the rules that govern the assembly and function of spinal motor networks, focusing on three main areas. We first examine how subtle variations in the wiring diagrams and organization of locomotor networks in different vertebrates permits animals to adapt their motor programs to the demands of their physical environment. We discuss how the membrane properties of spinal interneurons, and their synaptic interactions, underlie the modulation of motor circuits and encoded motor behaviors. We also describe recent molecular genetic approaches to map and manipulate the connectivity and interactions of spinal interneurons and to assess the impact of such perturbations on network function and motor behavior. Copyright 2009 Elsevier Ltd. All rights reserved.

Guillermo M. Lanuza,  Simon Gosgnach,  Alessandra Pierani … (2004)
The sequential stepping of left and right limbs is a fundamental motor behavior that underlies walking movements. This relatively simple locomotor behavior is generated by the rhythmic activity of motor neurons under the control of spinal neural networks known as central pattern generators (CPGs) that comprise multiple interneuron cell types. Little, however, is known about the identity and contribution of defined interneuronal populations to mammalian locomotor behaviors. We show a discrete subset of commissural spinal interneurons, whose fate is controlled by the activity of the homeobox gene Dbx1, has a critical role in controlling the left-right alternation of motor neurons innervating hindlimb muscles. Dbx1 mutant mice lacking these ventral interneurons exhibit an increased incidence of cobursting between left and right flexor/extensor motor neurons during drug-induced locomotion. Together, these findings identify Dbx1-dependent interneurons as key components of the spinal locomotor circuits that control stepping movements in mammals.