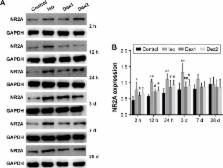 Considerable evidences support the finding that the anesthesia reagent isoflurane increases neuronal cell death in young rats. Recent studies have shown that dexmedetomidine can reduce isoflurane-induced neuronal injury, but the mechanism remains unclear. We investigated whether isoflurane cause neurotoxicity to the central nervous system by regulating the N-methyl-D-aspartate receptor (NMDAR) and excitatory amino acid transporter1 (EAAT1) in young rats. Furthermore, we examined if dexmedetomidine could decrease isoflurane-induced neurotoxicity.

Neonatal rats (postnatal day 7, n=144) were randomly divided into four groups of 36 animals each: control (saline injection without isoflurane); isoflurane (2% for 4 h); isoflurane + single dose of dexmedetomidine (75 µg/kg, 20 min before the start of 2% isoflurane for 4 h); and isoflurane + dual doses of dexmedetomidine (25 µg/kg, 20 min before and 2 h after start of isoflurane at 2% for 4 h). Six neonates from each group were euthanatized at 2 h, 12 h, 24 h, 3 days, 7 days and 28 days post-anesthesia. Hippocampi were collected and processed for protein extraction. Expression levels of the NMDAR subunits NR2A and NR2B, EAAT1 and caspase-3 were measured by western blot analysis.

Dexmedetomidine protects the brain against the use of isoflurane through the regulation of NR2A, NR2B and EAAT1. However, using the same amount of dexmedetomidine, the trend of protection is basically the same.

V Jevtovic-Todorovic,  David F. Wozniak,  Thomas Hartman … (2003)
Recently it was demonstrated that exposure of the developing brain during the period of synaptogenesis to drugs that block NMDA glutamate receptors or drugs that potentiate GABA(A) receptors can trigger widespread apoptotic neurodegeneration. All currently used general anesthetic agents have either NMDA receptor-blocking or GABA(A) receptor-enhancing properties. To induce or maintain a surgical plane of anesthesia, it is common practice in pediatric or obstetrical medicine to use agents from these two classes in combination. Therefore, the question arises whether this practice entails significant risk of inducing apoptotic neurodegeneration in the developing human brain. To begin to address this problem, we have administered to 7-d-old infant rats a combination of drugs commonly used in pediatric anesthesia (midazolam, nitrous oxide, and isoflurane) in doses sufficient to maintain a surgical plane of anesthesia for 6 hr, and have observed that this causes widespread apoptotic neurodegeneration in the developing brain, deficits in hippocampal synaptic function, and persistent memory/learning impairments.

J Neyton,  Pierre Paoletti (2007)
N-methyl-D-aspartate receptors (NMDARs) are glutamate-gated ion channels widely expressed in the central nervous system that play key roles in excitatory synaptic transmission. Because of their involvement in numerous neurological disorders, NMDARs are also targets of therapeutic interest. NMDARs occur as multiple subtypes which differ in their subunit composition and in their biophysical and pharmacological properties. In particular, NMDARs contain a diversity of sites at which endogenous ligands or pharmacological agents can act to modulate receptor activity in a subunit-selective manner, and recent structural and functional data have started to reveal the molecular determinants for this subunit selectivity. These include the binding sites for glutamate, the ion-channel pore and the recently identified allosteric sites on the N-terminal domain. Other potential sites yet unexplored by medicinal chemistry programs are also considered, in particular at the interface between subunits. Given the growing body of evidence that diverse brain disorders implicate different NMDAR subtypes, such as NR2B in pain or NR3A in white matter injury, there is a growing interest in exploiting the pharmacological heterogeneity of NMDARs for the development of novel NMDAR subtype-selective compounds.

Hiroki Toyoda,  Hui Xu,  Guang Zhang … (2005)
Cortical plasticity is thought to be important for the establishment, consolidation, and retrieval of permanent memory. Hippocampal long-term potentiation (LTP), a cellular mechanism of learning and memory, requires the activation of glutamate N-methyl-D-aspartate (NMDA) receptors. In particular, it has been suggested that NR2A-containing NMDA receptors are involved in LTP induction, whereas NR2B-containing receptors are involved in LTD induction in the hippocampus. However, LTP in the prefrontal cortex is less well characterized than in the hippocampus. Here we report that the activation of the NR2B and NR2A subunits of the NMDA receptor is critical for the induction of cingulate LTP, regardless of the induction protocol. Furthermore, pharmacological or genetic blockade of the NR2B subunit in the cingulate cortex impaired the formation of early contextual fear memory. Our results demonstrate that the NR2B subunit of the NMDA receptor in the prefrontal cortex is critically involved in both LTP and contextual memory.