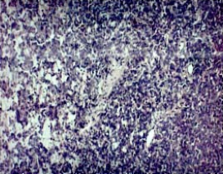 Vascular neoplasms, other than benign are characterized as intermediate or malignant. They are often enshrouded in controversy, because the same neoplasm could show variability in biologic behavior that may not be correlated with microscopic features. The intermediate grade vascular neoplasm is named as epithelioid hemangioendothelioma (EHE). Epithelioid hemangioendothelioma of the oral cavity has been infrequently reported. To the best of our knowledge, the review of the English literature revealed a total of 30 cases of intraoral EHE reported till today. We report such a rare case in a 20 year old male, presented with a growth in lower anterior lingual gingiva since five months before the diagnosis with a history of similar swelling, twice in the same area. The differential diagnosis and brief review of literature is also discussed in the current article.

Epithelioid hemangioendothelioma: a vascular tumor often mistaken for a carcinoma.

Scott Weiss,  Katherine M Enzinger (1982)
Epithelioid hemangioendothelioma is a unique tumor of adult life which is characterized by an "epithelioid" or "histiocytoid" endothelial cell. Forty-one cases of this rare tumor have been recognized at the Armed Forces Institute of Pathology. They may occur in either superficial or deep soft tissue, and in 26 cases appeared to arise from a vessel, usually a medium-sized or large vein. They are composed of rounded or slightly spindled eosinophilic endothelial cells with rounded nuclei and prominent cytoplasmic vacuolization. The latter feature probably represents primitive lumen formation by a single cell. The cells grown in small nests or cords and only focally line well-formed vascular channels. The pattern of solid growth and the epithelioid appearance of the endothelium frequently leads to the mistaken diagnosis of metastatic carcinoma. The tumor can be distinguished from a carcinoma by the lack of pleomorphism and mitotic activity in most instances and by the presence of focal vascular channels. Ultrastructural study in four cases confirmed the endothelial nature of the tumor in demonstrating cells surrounded by basal lamina, dotted with surface pinocytotic vesicles, and occasionally containing Weibel-Palade bodies. Follow-up information in 31 cases indicated that 20 patients were alive and well following therapy; three developed local recurrences and six metastases. It is suggested the term epithelioid hemangioendothelioma be used to designate these biologically "borderline" neoplasms. The significance of the epithelioid endothelial cell is not entirely clear. Since it may be observed in both benign and malignant vascular lesions, its presence alone does not define a clinicopathologic entity.

Diagnostic Surgical Pathology of the Head and Neck

Epithelioid hemangioendothelioma of the head and neck: a clinicopathologic report of twelve cases.

F Kratochvil,  Yvonne G. Ellis (1985)
Epithelioid hemangioendothelioma (EH) is a recently described unusual vascular neoplasm of the soft tissues. Apparently identical tumors have also been described in the lung and and liver. Although no previous reports have described these lesions in the head and neck, twelve cases from this region are reported here. There is a wide age distribution throughout adulthood of affected patients. The 4-year-old patient in this series is the youngest thus far reported. There is no sex predilection. The submandibular region is the head and neck site most frequently involved. The unusual histologic appearance of these tumors is demonstrated by the fact that only one case was originally diagnosed as a vascular neoplasm. Nests and cords of pleomorphic epithelioid cells, spindle cells, and vacuolated cells and a hyalinized or myxochondroid stroma are features that distinguish EH. All eight of the tumors tested showed factor VIII-related antigen immunoreactivity. EH has a biologic potential intermediate between that of hemangioma and conventional angiosarcoma.