Effect of aminoguanidine on cardiovascular responses and survival time during blood loss: A study in normotensive and deoxycorticosterone acetate-salt hypertensive rats 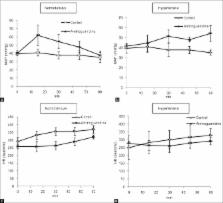 Twenty-four male rats were divided into hypertensive and normotensive groups ( n = 12 each). Hypertension was induced by subcutaneous injection of deoxycorticoesterone acetate (DOCA), 30 mg/kg in uninephrectomized rats. Decompensated hemorrhagic shock was induced by withdrawing blood until the mean arterial pressure (MAP) reached 40 mmHg. After 120 min, each group was assigned to aminguanidine (100 mg/kg) and control group. Hemodynamic parameters were monitored for next 60 min. Blood samples were taken before and after shock period and 60 min after treatment. Survival rate was monitored for 72 h.

It seems that inhibition of iNOS with AG does not have beneficial effects on hemodynamatic parameters and survival rate during decompensated hemorrhagic shock in normotensive and hypertensive animals.

Ulrich Förstermann (2010)
Endothelium-derived nitric oxide (NO) is a paracrine factor that controls vascular tone, inhibits platelet function, prevents adhesion of leukocytes, and reduces proliferation of the intima. An enhanced inactivation and/or reduced synthesis of NO is seen in conjunction with risk factors for cardiovascular disease. This condition, referred to as endothelial dysfunction, can promote vasospasm, thrombosis, vascular inflammation, and proliferation of vascular smooth muscle cells. Vascular oxidative stress with an increased production of reactive oxygen species (ROS) contributes to mechanisms of vascular dysfunction. Oxidative stress is mainly caused by an imbalance between the activity of endogenous pro-oxidative enzymes (such as NADPH oxidase, xanthine oxidase, or the mitochondrial respiratory chain) and anti-oxidative enzymes (such as superoxide dismutase, glutathione peroxidase, heme oxygenase, thioredoxin peroxidase/peroxiredoxin, catalase, and paraoxonase) in favor of the former. Also, small molecular weight antioxidants may play a role in the defense against oxidative stress. Increased ROS concentrations reduce the amount of bioactive NO by chemical inactivation to form toxic peroxynitrite. Peroxynitrite-in turn-can "uncouple" endothelial NO synthase to become a dysfunctional superoxide-generating enzyme that contributes to vascular oxidative stress. Oxidative stress and endothelial dysfunction can promote atherogenesis. Therapeutically, drugs in clinical use such as ACE inhibitors, AT(1) receptor blockers, and statins have pleiotropic actions that can improve endothelial function. Also, dietary polyphenolic antioxidants can reduce oxidative stress, whereas clinical trials with antioxidant vitamins C and E failed to show an improved cardiovascular outcome.

Luis Ulloa,  Davorka Messmer (2006)
HMGB1 was originally identified as a DNA-binding protein that functions as a structural co-factor critical for proper transcriptional regulation in somatic cells. Recent studies indicate that HMGB1 can be "passively released" into the extracellular milieu by necrotic and damaged somatic cells. Extracellular HMGB1 represents an optimal "necrotic marker" selected by the innate immune system to recognize tissue damage and initiate reparative responses. HMGB1 in the extracellular milieu promotes maturation of myeloid and plasmacytoid dendritic cells, and induces myocardial regeneration after infarction. However, extracellular HMGB1 also acts as a potent pro-inflammatory cytokine that contributes to the pathogenesis of diverse inflammatory and infectious disorders. A growing number of studies indicate that HMGB1 is a successful therapeutic target in experimental models of ischemia/reperfusion, acute respiratory distress syndrome, rheumatoid arthritis, sepsis, and cancer. From a clinical perspective, HMGB1 represents a current challenge that can be exploited orchestrate reparative responses while preventing its pathological potential. This article focus on the immuno-regulatory role of HMGB1 and its contribution to infectious and inflammatory disorders.