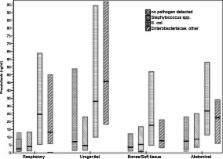 Secondary analysis of the prospectively collected patient-level dataset from a cluster randomized quality improvement trial was performed. The trial included sepsis patients with organ dysfunction treated in the participating intensive care units from 2011 to 2015. Test performance for the prediction of Gram-negative bacteremia was assessed by receiver operating curve analysis. Independent effects of specific pathogen groups and foci of infection on PCT concentrations were assessed by linear logistic regression models.

Blood cultures (BC) and PCT concentrations had been taken in 4858 of 6561 documented patients. PCT was significantly higher in Gram-negative bacteremia compared to Gram-positive bacteremia or candidemia ( p < 0.001). The area under the curve was 0.72 (95% confidence interval 0.71–0.74) for the prediction of Gram-negative bacteremia compared to all other blood culture results including negative blood cultures. The optimized cutoff value was 10 ng/ml (sensitivity 69%, specificity 35%). PCT differed significantly between specific groups of pathogens ( p < 0.001) with highest concentrations in Escherichia coli, Streptococcus species and other Enterobacteriaceae. PCT was highest in urogenital followed by abdominal infection and lowest in respiratory infection ( p < 0.001). In a linear regression model, Streptococci, E. coli and other Enterobacteriaceae detected from BC were associated with three times higher PCT values. Urogenital or abdominal foci of infection were associated with twofold increased PCT values independent of the pathogen.

Serum PCT concentrations are higher in patients with Gram-negative bacteremia than in patients with Gram-positive bacteremia or candidemia. However, the discriminatory power of this difference is too low to guide therapeutic decisions. Variations in PCT serum concentrations are not determined solely by Gram-negative or Gram-positive bacteria but are also affected by distinct groups of pathogens and different foci of infection.

F Re,  J Strominger (2001)
Toll-like receptors (TLRs) mediate cell activation by various microbial products. Here, we demonstrate that activation of dendritic cells by TLR2 or TLR4 agonists, although it led to comparable activation of NF-kappa B and mitogen-activated protein kinase (MAPK) family members, resulted in striking differences in cytokine and chemokine gene transcription, suggesting that TLR2 and TLR4 signaling is not equivalent. A TLR4 agonist specifically promoted the production of the Th1-inducing cytokine interleukin (IL) 12 p70 and the chemokine interferon-gamma inducible protein (IP)-10, which is also associated to Th1 responses. In contrast, TLR2 stimulation failed to induce IL-12 p70 and interferon-gamma inducible protein (IP)-10 but resulted in the release of the IL-12 inhibitory p40 homodimer, producing conditions that are predicted to favor Th2 development. TLR2 stimulation also resulted in preferential induction of IL-8 and p19/IL-23. Involvement of phosphatidylinositol 3-kinase and p38 MAPK in the TLR-mediated induction of several cytokine and chemokine messages was demonstrated using specific inhibitors. Thus, TLRs can translate the information regarding the nature of pathogens into differences in the cytokines and chemokines produced by dendritic cells and therefore may contribute to the polarization of the acquired immune response.

Physiology and genetics of procalcitonin.

K Nedelníková,  P Maruna,  R. Gürlich (1999)
Procalcitonin (PCT), a protein of 116 amino-acids with molecular weight of 13 kDa, was discovered 25 years ago as a prohormone of calcitonin produced by C-cells of the thyroid gland and intracellularly cleaved by proteolytic enzymes into the active hormone. Circulating levels of PCT in healthy subjects are below detection limit. Since 1993 when its elevated level was found in patients with bacterial infection, PCT became an important protein in the detection and differential diagnostics of inflammatory states. The production of PCT during inflammation is linked with a bacterial endotoxin and with inflammatory cytokines (TNF, IL-6). PCT detectable in the plasma during inflammation is not produced in C-cells of the thyroid. The probable site of PCT production during inflammation are the neuroendocrine cells in the lungs or intestine. There is no evidence of plasma PCT binding to cellular receptors of calcitonin, and the role of PCT in calcium and phosphate metabolism during sepsis is still not clear. Other hypothetical roles of PCT (cytokine network regulation, PCT as an endogenous non-steroid antiinflammatory drug) are being considered.

Molecular characterization of the acute inflammatory response to infections with gram-negative versus gram-positive bacteria.