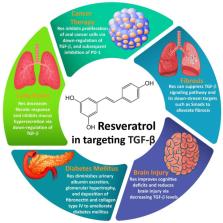 Resveratrol (Res) is a well-known natural product that can exhibit important pharmacological activities such as antioxidant, anti-diabetes, anti-tumor, and anti-inflammatory. An evaluation of its therapeutic effects demonstrates that this naturally occurring bioactive compound can target different molecular pathways to exert its pharmacological actions. Transforming growth factor-beta (TGF-β) is an important molecular pathway that is capable of regulating different cellular mechanisms such as proliferation, migration, and angiogenesis. TGF-β has been reported to be involved in the development of disorders such as diabetes, cancer, inflammatory disorders, fibrosis, cardiovascular disorders, etc. In the present review, the relationship between Res and TGF-β has been investigated. It was noticed that Res can inhibit TGF-β to suppress the proliferation and migration of cancer cells. In addition, Res can improve fibrosis by reducing inflammation via promoting TGF-β down-regulation. Res has been reported to be also beneficial in the amelioration of diabetic complications via targeting the TGF-β signaling pathway. These topics are discussed in detail in this review to shed light on the protective effects of Res mediated via the modulation of TGF-β signaling.

Thomas Walle, Faye Hsieh, Mark Delegge … (2004)
The dietary polyphenol resveratrol has been shown to have chemopreventive activity against cardiovascular disease and a variety of cancers in model systems, but it is not clear whether the drug reaches the proposed sites of action in vivo after oral ingestion, especially in humans. In this study, we examined the absorption, bioavailability, and metabolism of 14C-resveratrol after oral and i.v. doses in six human volunteers. The absorption of a dietary relevant 25-mg oral dose was at least 70%, with peak plasma levels of resveratrol and metabolites of 491 +/- 90 ng/ml (about 2 microM) and a plasma half-life of 9.2 +/- 0.6 h. However, only trace amounts of unchanged resveratrol (<5 ng/ml) could be detected in plasma. Most of the oral dose was recovered in urine, and liquid chromatography/mass spectrometry analysis identified three metabolic pathways, i.e., sulfate and glucuronic acid conjugation of the phenolic groups and, interestingly, hydrogenation of the aliphatic double bond, the latter likely produced by the intestinal microflora. Extremely rapid sulfate conjugation by the intestine/liver appears to be the rate-limiting step in resveratrol's bioavailability. Although the systemic bioavailability of resveratrol is very low, accumulation of resveratrol in epithelial cells along the aerodigestive tract and potentially active resveratrol metabolites may still produce cancer-preventive and other effects.

Bernhard Schmierer, Caroline Hill (2007)
Ligands of the transforming growth factor-beta (TGFbeta) superfamily of growth factors initiate signal transduction through a bewildering complexity of ligand-receptor interactions. Signalling then converges to nuclear accumulation of transcriptionally active SMAD complexes and gives rise to a plethora of specific functional responses in both embryos and adult organisms. Current research is focused on the mechanisms that regulate SMAD activity to evoke cell-type-specific and context-dependent transcriptional programmes. An equally important challenge is understanding the functional role of signal strength and duration. How are these quantitative aspects of the extracellular signal regulated? How are they then sensed and interpreted, and how do they affect responses?

Minlong Shi, Jianghai Zhu, Rui Wang … (2011)
Transforming growth factor (TGF)-β is stored in the extracellular matrix as a latent complex with its prodomain. Activation of TGF-β1 requires the binding of α(v) integrin to an RGD sequence in the prodomain and exertion of force on this domain, which is held in the extracellular matrix by latent TGF-β binding proteins. Crystals of dimeric porcine proTGF-β1 reveal a ring-shaped complex, a novel fold for the prodomain, and show how the prodomain shields the growth factor from recognition by receptors and alters its conformation. Complex formation between α(v)β(6) integrin and the prodomain is insufficient for TGF-β1 release. Force-dependent activation requires unfastening of a 'straitjacket' that encircles each growth-factor monomer at a position that can be locked by a disulphide bond. Sequences of all 33 TGF-β family members indicate a similar prodomain fold. The structure provides insights into the regulation of a family of growth and differentiation factors of fundamental importance in morphogenesis and homeostasis.