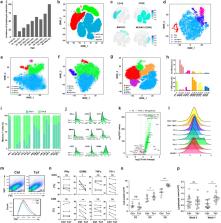 Yan-Ying Fan,  Zi-Tong Huang,  Li Li … (2009)
SARS-CoV infection of human results in antigen-specific cellular and humoral immune responses. However, it is critical to determine whether SARS-CoV-specific memory T cells can persist for long periods of time. In this study, we analyzed the cellular immune response from 21 SARS-recovered individuals who had been diagnosed with SARS in 2003 by using ELISA, CBA, ELISpot and multiparameter flow cytometry assays. Our results demonstrated that low levels of specific memory T cell responses to SARS-CoV S, M, E and N peptides were detected in a proportion of SARS-recovered patients, and IFN-γ was the predominant cytokine produced by T cells after stimulation with peptides. Cytometry analysis indicated that the majority of memory CD8+ T cells produced IFN-γ, whereas memory CD4+ T cells produced IFN-γ, IL-2 or TNF-α. These results might provide valuable information on the cellular immune response in recovered SARS-CoV patients for the rational design of vaccines against SARS-CoV infection.

R. King,  C Tuthill (2016)
Thymosin alpha 1 (Ta1) is a peptide originally isolated from thymic tissue as the compound responsible for restoring immune function to thymectomized mice. Ta1 has a pleiotropic mechanism of action, affecting multiple immune cell subsets that are involved in immune suppression. Ta1 acts through Toll-like receptors in both myeloid and plasmacytoid dendritic cells, leading to activation and stimulation of signaling pathways and initiation of production of immune-related cytokines. Due to the immune stimulating effects of Ta1, the compound would be expected to show utility for treatment of immune suppression, whether related to aging or to diseases such as infection or cancer. Extensive studies in both the preclinical and clinical setting will be summarized in the subsequent sections. These studies have demonstrated improvements in immune system cell subsets and the potential of Ta1 for the treatment of a range of diseases.