Plant-derived immunomodulators: an insight on their preclinical evaluation and clinical trials 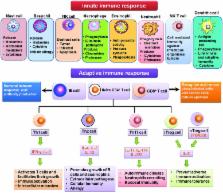 The phagocyte–microbe interactions in the immune system is a defense mechanism but when excessively or inappropriately deployed can harm host tissues and participate in the development of different non-immune and immune chronic inflammatory diseases such as autoimmune problems, allergies, some rheumatoid disorders, cancers and others. Immunodrugs include organic synthetics, biological agents such as cytokines and antibodies acting on single targets or pathways have been used to treat immune-related diseases but with limited success. Most of immunostimulants and immunosuppressants in clinical use are the cytotoxic drugs which possess serious side effects. There is a growing interest to use herbal medicines as multi-component agents to modulate the complex immune system in the prevention of infections rather than treating the immune-related diseases. Many therapeutic effects of plant extracts have been suggested to be due to their wide array of immunomodulatory effects and influence on the immune system of the human body. Phytochemicals such as flavonoids, polysaccharides, lactones, alkaloids, diterpenoids and glycosides, present in several plants, have been reported to be responsible for the plants immunomodulating properties. Thus the search for natural products of plant origin as new leads for development of potent and safe immunosuppressant and immunostimulant agents is gaining much major research interest. The present review will give an overview of widely investigated plant-derived compounds (curcumin, resveratrol, epigallocatechol-3-gallate, quercetin, colchicine, capsaicin, andrographolide, and genistein) which have exhibited potent effects on cellular and humoral immune functions in pre-clinical investigations and will highlight their clinical potential.

The effects of plant flavonoids on mammalian cells: implications for inflammation, heart disease, and cancer.

Theoharis C. Theoharides,  Chithan Kandaswami,  Laura E. Middleton … (2000)
Flavonoids are nearly ubiquitous in plants and are recognized as the pigments responsible for the colors of leaves, especially in autumn. They are rich in seeds, citrus fruits, olive oil, tea, and red wine. They are low molecular weight compounds composed of a three-ring structure with various substitutions. This basic structure is shared by tocopherols (vitamin E). Flavonoids can be subdivided according to the presence of an oxy group at position 4, a double bond between carbon atoms 2 and 3, or a hydroxyl group in position 3 of the C (middle) ring. These characteristics appear to also be required for best activity, especially antioxidant and antiproliferative, in the systems studied. The particular hydroxylation pattern of the B ring of the flavonoles increases their activities, especially in inhibition of mast cell secretion. Certain plants and spices containing flavonoids have been used for thousands of years in traditional Eastern medicine. In spite of the voluminous literature available, however, Western medicine has not yet used flavonoids therapeutically, even though their safety record is exceptional. Suggestions are made where such possibilities may be worth pursuing.

Peng Li,  Yu-Long Yin,  Defa Li … (2007)
A deficiency of dietary protein or amino acids has long been known to impair immune function and increase the susceptibility of animals and humans to infectious disease. However, only in the past 15 years have the underlying cellular and molecular mechanisms begun to unfold. Protein malnutrition reduces concentrations of most amino acids in plasma. Findings from recent studies indicate an important role for amino acids in immune responses by regulating: (1) the activation of T lymphocytes, B lymphocytes, natural killer cells and macrophages; (2) cellular redox state, gene expression and lymphocyte proliferation; and (3) the production of antibodies, cytokines and other cytotoxic substances. Increasing evidence shows that dietary supplementation of specific amino acids to animals and humans with malnutrition and infectious disease enhances the immune status, thereby reducing morbidity and mortality. Arginine, glutamine and cysteine precursors are the best prototypes. Because of a negative impact of imbalance and antagonism among amino acids on nutrient intake and utilisation, care should be exercised in developing effective strategies of enteral or parenteral provision for maximum health benefits. Such measures should be based on knowledge about the biochemistry and physiology of amino acids, their roles in immune responses, nutritional and pathological states of individuals and expected treatment outcomes. New knowledge about the metabolism of amino acids in leucocytes is critical for the development of effective means to prevent and treat immunodeficient diseases. These nutrients hold great promise in improving health and preventing infectious diseases in animals and humans.

Anti-inflammatory properties of curcumin, a major constituent of Curcuma longa: a review of preclinical and clinical research.

Julie S Jurenka (2009)
Curcuma longa (turmeric) has a long history of use in Ayurvedic medicine as a treatment for inflammatory conditions. Turmeric constituents include the three curcuminoids: curcumin (diferuloylmethane; the primary constituent and the one responsible for its vibrant yellow color), demethoxycurcumin, and bisdemethoxycurcumin, as well as volatile oils (tumerone, atlantone, and zingiberone), sugars, proteins, and resins. While numerous pharmacological activities, including antioxidant and antimicrobial properties, have been attributed to curcumin, this article focuses on curcumin's anti-inflammatory properties and its use for inflammatory conditions. Curcumin's effect on cancer (from an anti-inflammatory perspective) will also be discussed; however, an exhaustive review of its many anticancer mechanisms is outside the scope of this article. Research has shown curcumin to be a highly pleiotropic molecule capable of interacting with numerous molecular targets involved in inflammation. Based on early cell culture and animal research, clinical trials indicate curcumin may have potential as a therapeutic agent in diseases such as inflammatory bowel disease, pancreatitis, arthritis, and chronic anterior uveitis, as well as certain types of cancer. Because of curcumin's rapid plasma clearance and conjugation, its therapeutic usefulness has been somewhat limited, leading researchers to investigate the benefits of complexing curcumin with other substances to increase systemic bioavailability. Numerous in-progress clinical trials should provide an even deeper understanding of the mechanisms and therapeutic potential of curcumin.

This article was submitted to Plant Metabolism and Chemodiversity, a section of the journal Frontiers in Plant Science